The third and maybe most anticipated stage has just started in downtown St-Georges.  The race will finish at the top of Mont-Mégantic - starting at 596.2 metres finishing at 1100 metres with a 10% average grade over the 5 km climb - at the end of 153.4 kms of racing

The roads were wet just before the racing started but the overnight rain was finished and blus sky beginning to poke through.  CC editor has never experienced rain on the Mont Megantic stage of the Tour de Beauce, so here is hoping the luck holds.

Team manager for the Heraklio-Murcia team of overall leader said today is not for Serrano.  The team will work to limit his losses, but will also support climbing specialists Francisco Mancebo and Hector Gonzalez to go for the win.  Serrano is a former TT champion of Spain and will use tomorrow's ITT to strengthen his lead.

There has been a series of attacks and counter attacks, but all have been shortlived.  Group is all together

At 35 km and the group is still all together

While you are waiting for updates, be sure to go to the Tour De Beauce website and watch the daily videos

especially the one for the 25th anniversary (top)

Now at 44 km and there are Lots of flats : Dionne, Chris Barton (BMC) Guillaume Boivin (Spidertech)

And the bunch is all together

Going through Lac-Drolet (59 km) and 2 are away: Valeriy Kobzarenko (TTi) and Sergy Grechyn (Amore & Vita) with a small gap.  The first KOM of the day is coming up shortly

They are on the KOM (at 66 km) now and the break is now 6:  Kobzarenko and Grechyn have been joined by Darren Rolfe (Fly V), Jeff Louder (BMC) , Derrick St-John (Garneau), Björn Papstein (SS Wledenbruck).

A bit of information about today's course.  The route out of St Georges was changed this year and is relatively flat compared to previous years.  This new course allowed the peloton to hold quite a high speed and discouraged breakaways.  Now that the course has gotten back to the usual route, the "rollers" are there.

5 km outside the village of Lac Megantic and the gap is 2:05 with Kobzarenko at the front driving it.

For some reason Fly V and BMC riders in break are not making any contribution.  Gap is 2:20

Fly V has David Tanner  in 2nd (on GC) while Grechyn who is in the break is 3rd.  Kobzarenko is 24th

They have hit a gravel section.  The race has been neutralized - no risk is being taken after what happened on stage 1.

Andrew Randell is a DNF'd.  He is still feeling some pain in his knee from a crash in Philly - Source Spidertech p/b Planet Energy

32 KM to go now.  The gap between the leaders and the peloton still holding around 3 min+

So here are the updates

Some riders complained about the "stoppage" at the gravel at ~ 106 km point.  Nathan O'Neil (Bahati Foundation) said "it's a bike race"!!!

At 25 km to go gap was holding

1:57 pm and at the start of the climb the bunch at the front is still all together 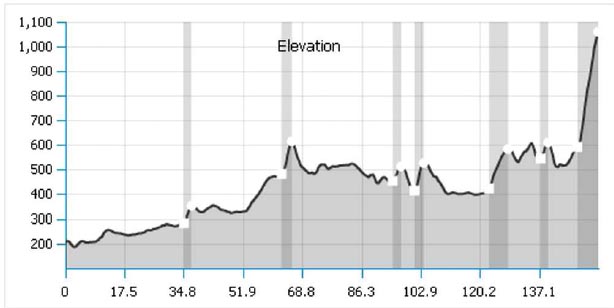