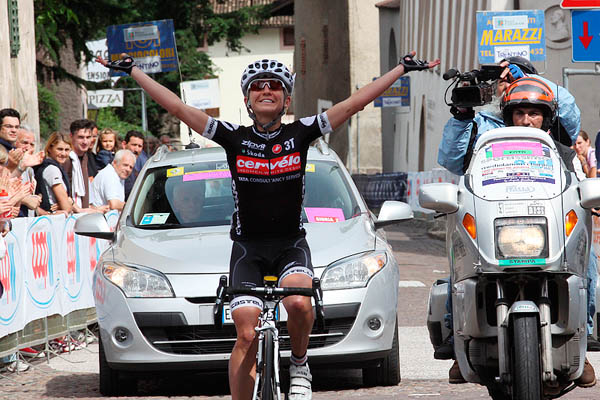 “Today’s race was 75km, with a category 1 climb, the Mendola pass,” said Jens Zemke, Sports Director. “We were pretty active right from the beginning. After 25km, Emma Pooley was in the lead, together with Noemi Cantele (ITA- HTC - Columbia Women). After about 10km, Emma dropped Cantele and arrived on the top of the Mendola with a four-minute lead. After the decent of 20 km she arrived with a significant gap at the finish. Teammate Patricia Schwager was in the group behind Emma. A fantastic day for the team again, the 20th UCI victory of the season.”

“It was a really long climb, 45 km but not really steep,” explained Emma Pooley, after the stage. “On the climb I went in the lead with Cantele but she didn’t work and was just on my wheel. The first time I attacked, she was able to follow. But with the second attack I was able to drop her. I wanted to make the gap as big as possible because I knew that she is good on the downhill and I didn’t want to take to many risks with the Giro d’ Italia in mind. Once again our team is really strong, and any one of my teammates could also be in my position today. We will defend the yellow jersey now and try to win this race.”