Marie-Hélène Premont is one of the most decorated Canadian mountain bike racers in the sport, and this year she will race the world championships in Mont Ste Anne on what is, literally, her home course. We sat down with Marie-Hélène to talk about racing at home, and her career-long history with Mont Ste Anne.

Canadian Cyclist: How did you get started with mountain biking, and with the World Cup at Mont Ste Anne?

Marie-Hélène Premont: It was through my mom, she was in charge of the first aid at Mont Ste Anne, so I became a volunteer. I was out there on the course with my whistle, looking at the riders ... I did that for two or three years, starting in the first year, in 1991. I was pretty young!

And then I started mountain biking at the Quebec Cup that was held at the same time as the World Cup, I started because of my boyfriend, because he was already a racer, so I decided to try it, and that's where I began.

The first race I did, I won it. I was Junior Sport, and I passed all the Junior [Expert] ladies. I wasn't good technically, but I was fit. That was my last year in Junior, and I raced the Quebec Cup series.

The next year [1996] I became Senior Elite, and I raced a few Canada Cups. I was finishing fourth, fifth, sixth ... It was the time of Melanie McQuaid, and Melanie Dorion, Chrissy Redden. I was starting to do the North American World Cups.

CC: So when was the first year you raced Mont Ste Anne?

MHP: It was 1997. Next year was the world championship at Mont Ste Anne, but I did not make the Canadian team ... It was at home, and I didn't make the team, and it was very hard! So I could only watch it and be a volunteer. Since then, I have done all the World Cups at Mont Ste Anne since 1999, and I won my first one in 2003.

CC: How many times have you won Mont Ste Anne?

MHP: Three [2005, 2006, 2008]. It is always special for me to win at Mont Ste Anne. It's a special race to be racing in front of your friends and family. I know the course, but it's not the reason why I'm good in Mont Ste Anne. I think it's more the crowd that helps me forget how painful it is during the race.

CC: I was talking to Gunn-Rita Dahle Flesjaa after you beat her [2006], and she said to me 'on this course Marie-Hélène is 50% stronger'.

MHP: For sure! It's not because of the course, it's because it is at home, and everybody is yelling for me.

CC: Of your wins at Mont Ste Anne, are there any that stand out especially? 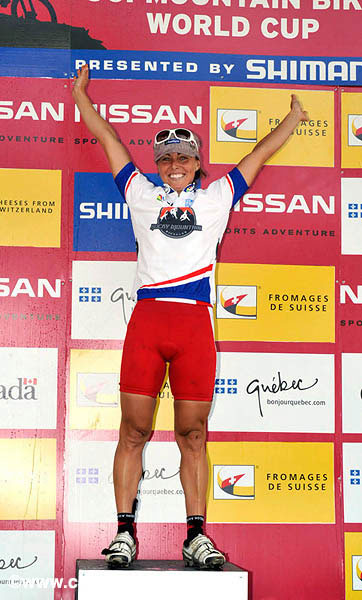 MHP: For sure the first one that I won. When I passed the finish line it was an incredible feeling ... almost as good as at Athens [2004 Olympics], when I finished second. It is great to be on the podium, and to win anywhere, but to be on the podium at home, and to hear the Canadian anthem and see the flag, and everything ... that's crazy.

CC: In 2008, when we talked you said 'I'm stopping, I'm finished after this year'. But then you came back for one more year, and now another year. How much of that is because the Worlds are in Mont Ste Anne?

I was feeling bad at all the races, and I can count on my hand all the days - including training - that I was feeling good. It was because of the asthma problems, and everything - I wasn't straight, my body was not aligned correctly. I just wasn't feeling good and my muscles were always painful. It was going good at all. So at the end of the season I decided to put my energy into putting myself right, how I was before the problems.

Then I started to feel better and better, so I made a decision with my boyfriend - because it is a decision that we have to make together - that it could be very good to do the Worlds at home, and that it would be too hard to watch it and not to be in it. So I would say that 50% of the decision [to keep racing] came because the Worlds were at home.

I had good support from my team, so it was easy to decide to keep going.

CC: A lot of athletes have trouble racing in front of a home crowd, because of all the pressure, but not you.

MHP: No, for me it is not a problem, I do better. I always want to do my best, and that's what I'm saying to myself one week before the race; 'Marie, do your best, have fun and enjoy the race'. People are there to hep you, and they want you to do well. But if you don't do well ... it happens, and they know that, and that's what I'm telling myself.

CC: And after Worlds?

MHP: After that, I'm not sure. I will take a decision then. If you asked me now I couldn't say either way, maybe I will continue or not.

CC: Have you been involved in the course design at Mont Ste Anne?

MHP: No, never. They show me the designs of what they are going to do, but I am not involved in any of the designs. I knew they were going to change a few parts from last year, but I didn't see them before getting here [for Worlds].

The only advantage I have is that I know the terrain, the mountain, the kind of mud, kind of roots, and everything. At Mont Ste Anne the climbing is perfect, for me, I like it long, but not super steep, and there is changes in the rhythm. So I like Dalby too ... but I don't like Madrid, and I always do well there! That's the kind of course that I don't like, but I'm good at.

But for sure I like Mont Ste Anne, because it is very good for me. But the only thing that I hope is that it will be long enough, because they have been cutting the race to one hour and 30 minutes and I like a longer race, like a two hour race, because I can be stronger on the last lap.

And I'm sleeping at home, in my own town, my own place, 15 minutes from Mont Ste Anne. No jet lag, no travelling, no nothing. I know it is good to be home and close to the people who are close to me. It helps me to have good results.

MHP: For sure to be on the podium ... and to do the race and have the feeling that I couldn't have done more than I did ... I will be happy with that.

CC: And after Worlds?

MHP: After that, I'm not sure. I will take a decision then. If you asked me now I couldn't say either way, maybe I will continue or not.

[Laughs, and draws a question mark in the air]