Close to 300 racers braved the conditions at the Calabogie Classic, presented by Cyclelogik, this past weekend. Calabogie Motorsports hosted the first Ontario Cup of the year that featured all four seasons of weather and a familiar strategic theme in the main events.

The second start wave included the elite women, and early in the race, a break of eight riders got away. With the all the major teams present, including Stevens, Re:Form, and Kallisto/WoB, the group quickly established a gap.  Several riders had a go through the mid part of the race, but the break generally maintained itself until first Sara Byers (Juvederm) and then Sue Schlatter (Stevens) bridged to the group with impressive solo efforts. Eventually, the race came down to an exciting sprint, with Natasha Elliot from Re:Form leading it out early, Melissa Bunn (Stevens) coming around at 300 metres to go, and finally Sara Byers coming over the top of Bunn at 150 metres to go for the win. 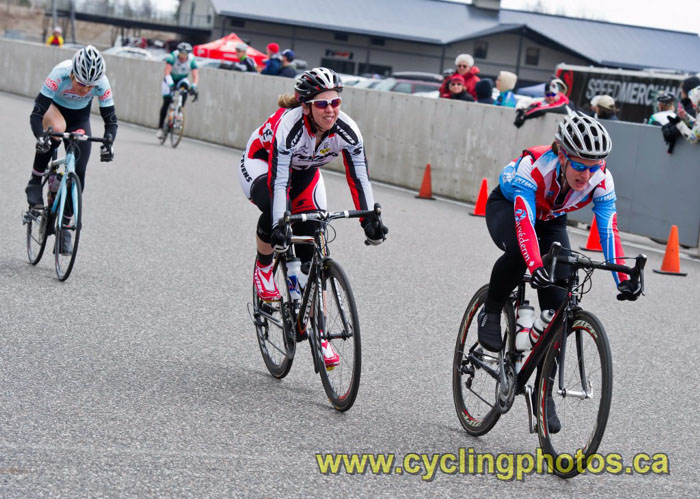 In the Elite3 race, the day was dominated by Christian Jug (Soigneur) and Rob Bruce (Kallisto/WoB), who attacked early and stayed away all day.  Jug took the two-up sprint from Bruce for the victory, while Isaac Leblanc (Sport Bazaar) took a hard fought third. Meanwhile, the Junior Men's race enjoyed that similar theme of an early move working well together and staying away.  The five breakaway riders provided the day's most exciting sprint finish, with Karl Hoppner (EMD Serono) timing his sprint perfectly to take the win by half a wheel in front of Brandon Etzl (Planet Energy) and Yohan Patry (Rocky Mtn)

Providing the mid day storyline, as officials prepared for the third start of the day, was a front of weather the type most people had never witnessed. Blowing in from one end of the track, a wave of snow and ice pellets filled the horizon and rapidly enveloped the track, sending everyone scampering for cover. The snow squall lasted about 20 minutes, followed, of course, by warm sunshine to melt the snow and allow the Elite and Master1 Men to start right on time.

Both of these races again followed the same pattern of an early move of 5-10 riders that was well represented and worked well in the wind, staying away to provide the day's winner.  In the Master1 Race, that move went about 20 kilometres into the race, with Ron Amos (RideWithRendall) driving the move away.  The break worked well until about 20 kilometres to go, when another attack from Amos split the group down to four, including Steven Baker (Team Cross), Richard Dagenais (Timmons CC), and Krzysztof Kurzawinski.  In the finale, Amos opened up the sprint from a long way out and tried to power away, but Baker caught and passed him in the last 50 metres to take the win. Dagenais closed quickly, but Amos held on for second, Dagenais taking third. 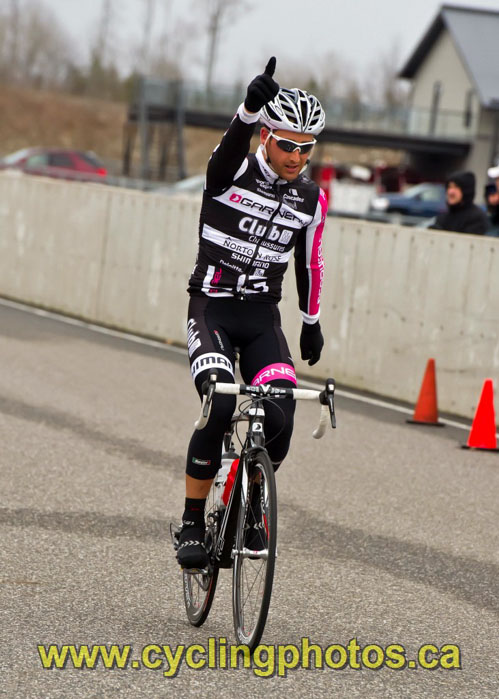 In the day's final finish, a well represented seven man move got away early and opened a huge gap on the field, driven hard by three riders from Garneau.  The break got away in the first 20 kilometres and would be decisive. The seven worked well together until approximately 30 kilometres to go, when three riders separated themselves, putting over 30 seconds into the now chasing four in a single lap of the windswept five kilometre course.  The winning move contained Shawn McCarthy and Brett Tivers, both from Garneau, and Jean-Samuel Deshaies from Rocky Mountain. The the three continued to open up their gap on the field, while the chasing peloton shattered into smaller chase groups amidst several more snow squalls and increasing wind. With an early attack into the finishing stretch, McCarthy enjoyed a long victory salute across the line, with Tivers separating from a clearly exhausted Deshaies for a 1-2 finish for Team Garneau. Jeff Schiller was able to jump the remainder of the early break to finish fourth and add to an impressive day out for the boys in pink.

Thanks again to the volunteers, officials, fans, racers and weather gods for a memorable and exciting day of racing.