"We are thrilled to have the world champion lining up with us," said Heal.  "Colavita/Forno D'Asolo is currently ranked #1 on USA Cycling's National Racing Calendar so the addition of a sprinter like Giorgia makes us unstoppable."

Bronzini, a native of Piacenza, Italy, will make her debut at the TD Bank Philadelphia International Women's Liberty Classic on June 5th, where her Colavita/Forno D'Asolo teammate Theresa Cliff-Ryan finished on the podium in third last year.  As Bronzini explains, "I came to Trexlertown, PA in 2001 for my junior championship but I've never raced the Philadelphia championship and I can't wait." 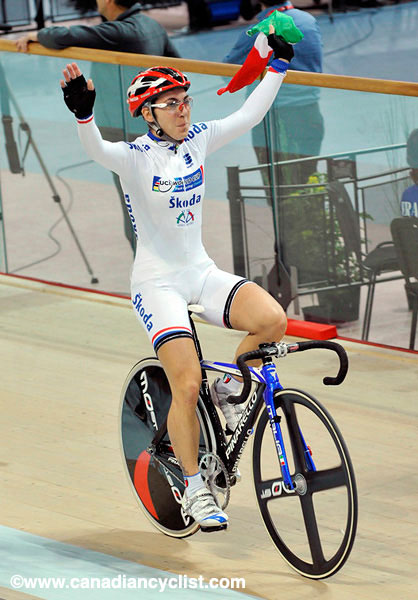 Bronzini started racing at 11, inspired by her father.  Since turning pro eight years ago, Bronzini has achieved more than 60 victories in road racing and on the track.  Before her victory at the 2010 UCI Road World Championships, Bronzini had won numerous stages in major European races, including the Giro Della Toscana Int. Femminile and Giro d'Italia Donne in her native Italy and the Route du France.  In April, Bronzini sprinted to her third victory at Italy's GP Liberazione, held on the day that commemorates the fall of Mussolini's Fascist republic in 1945.  Earlier this season, she took third in the Ronde van Drenthe in the Netherlands and finished second in the first and third stages of the Ladies Tour of Qatar.

Bronzini's trip will include her first visit to New Jersey where she will race the Tour of Somerville on May 30th, the oldest major cycling event in the US.  New Jersey is also home to Colavita/Forno D'Asolo's title sponsor Colavita USA, importers and distributors of Colavita Extra Virgin Olive Oil, Perugina chocolates, and other Italian specialty products.

"We are very excited to host World Champion Giorgia Bronzini," said John A. Profaci, Colavita's Vice President of Marketing.  "Colavita has been supporting women's cycling here in the US for nearly 10 years and we're proud that our squad now ranks among the best in the world."