May 14/11 12:43 pm - Christian Meier highlighted at ATOC as Breakaway from Cancer champion

Christian Meier lost his brother, Michael, to brain cancer last year. In his memory, he has a tattoo on the inside of his left forearm that reads “last chance” which he wears in tribute to his late sibling. It also serves as a commitment to raise awareness about prevention, particularly among young people. Christian’s brother’s sudden diagnosis and passing made him realize that you never know when you’re going to get your last chance. 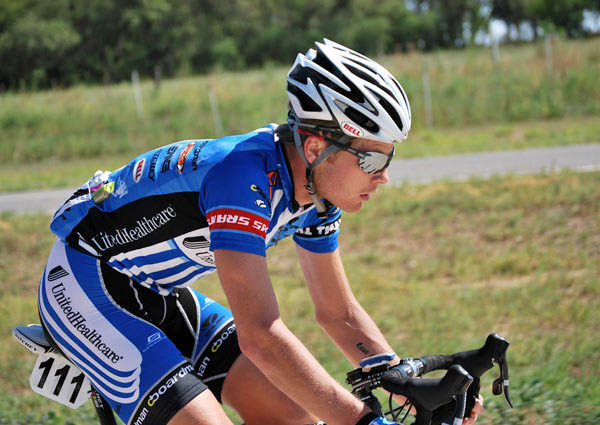 Christian now rides for young people who have cancer, especially children. And as the peloton moves from Lake Tahoe to Thousand Oaks during this year’s Amgen Tour of California, Christian will be riding not only for his late brother Michael, but for all children especially California’s kids who have been impacted by this terrible disease.

Meier isn’t sure early detection would have helped his older brother by two years, Michael, who woke up one day with a horrible headache and had surgery two days later to remove a brain tumor. Michael’s cancer returned suddenly last summer, and he passed away while Christian was riding the Vuelta a Espana, forcing the grief stricken younger brother to abandon his first Grand Tour with four stages left and go home.

In an article last year in The Vancouver Sun, Meier talked about his brother’s passing.

“What could have helped him a lot is knowledge in general,” Meier said. “How the disease affects you, what you can expect and also what you should look for in treatment. My brother and family were not well enough educated on the cancer and therefore maybe were to quick to accept what we were being told by doctors. Looking back, maybe we should have gone elsewhere as it seemed like his case was a bit beyond their capabilities. We should have sought out more specialized services and it frustrates me that it was maybe just a lack of knowledge may have cost him more time to live. There is a lot of money being raised for cancer research, which is super, but a lot of cancers can be cured with early detection so this is also something we should put resources into.”

Christian took part in last year’s Ride to Conquer Cancer from Vancouver to Seattle, and also in The Journey Home, another fundraising ride back from Seattle. The latter is still raising money through its website, including signed jerseys from the ProTour peloton in Europe.