As most readers will be aware by now, the first stage of the Amgen Tour of California has been cancelled, after first being postponed and shortened from 197 to 80 kilometres.  Forecasts of snow had led to much speculation that the race would not take place, and the race woke up to an accumulation of over seven centimetres of snow in the starting town of South Lake Tahoe, meaning that conditions would be worse as the race moved north and hit the climbs. 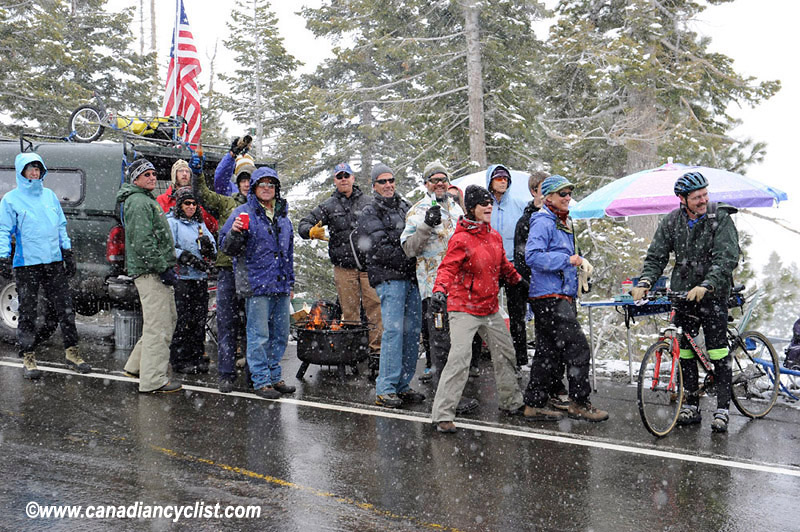 Fans on the KOM

At 8:30 am, race organizers announced the statement:  "After monitoring weather conditions overnight and this morning, while consulting with public safety and race team officials, organizers of the 2011 Amgen Tour of California have announced that the current and projected weather conditions will allow Stage 1 of the race to start at 1:15 p.m. PT at the original start line in South Lake Tahoe.  Race officials will continue to pay close attention and monitor the course and all other conditions. If at any time it is determined to be unsafe to continue, the race will be neutralized."

We drove up to the top of the first KoM climb at Emerald Bay, and conditions were marginal - blowing snow, with occasional whiteouts.  The roads were wet, but not icy, however, whenever a tree dumped its accumulated load, and sudden pile of slush would appear in the road.

The worst conditions were at the final KoM and descent into the finish at Northstar, on Brockway Summit at 7000 feet.  There was much more snow, and fears of black ice on the steep descent.  The California Department of Transportation went as far as permitting the use of salt on the road surface - the first time it has been allowed in the Tahoe area for decades.

Nevertheless, plans went ahead for the shortened stage to take place, along the west side of the lake and then directly to Northstar instead of going all the way around the lake and back up the west side again.  The riders began signing in, and the sun even came out for a while.

At five minutes to the start time, everyone was signed in, the riders were lined up and the advance vehicles had pulled ahead of the race.  Literally as the race was about to start, Jonathan Vaughters (DS for Garmin-Cervelo), the Leopard-Trek DS and an HTC representative met with Andrew Messick (President of AEG Sports) and Race Director Jim Birrell.  HTC rider Bernard Eisel also joined them.  An animated conversation ensued for several minutes, with Vaughters visibly upset, before an abrupt announcement was made over race radio that the race was cancelled.

In a statement released by the organization, Messick was quoted as saying: "We were monitoring weather conditions up until the predicted 1:15 p.m. PT start time, and we just couldn't safely put the riders out on the course with the current forecast. We appreciate the support of all the fans that came out to the start line in South Lake Tahoe, and we hope they understand and respect our decision, but when the safety of riders and fans is involved, there is no leeway. We are looking forward to seeing everyone at the start tomorrow in Squaw Valley."

As the race was being cancelled, three-time Amgen Tour of California champion Levi Leipheimer addressed the crowd from the sign-in stage and said:

"The riders discussed as a group and we just don't feel comfortable riding knowing what can happen, especially in light of what happened last Monday. We still have a full week of racing ahead of us, so we want to make sure everyone is healthy. With the weather conditions the way they are, racing today is just not possible. On behalf of all the riders, we apologize and appreciate everyone's support and understanding."

However, it is not clear that this was a general consensus among the riders and teams, in fact, Leipheimer seemed surprised when he was informed on the line that other riders were not going to start.

SpiderTech's team director Steve Bauer said after the stage was cancelled (by text, as they were driving to the hotel): "My feeling is that it was too big of a risk, calling the race a go at Noon.  There were still snow squalls around the lake.  Inevitably, it seems like certain riders made the call to stop the race, but it was confusion as to who really cancelled the race."

Conditions were, in fact, getting worse, with heavier snow starting up and beginning to accumulate on the road surface.  The temperature and wind brought the wind chill factor down to -8 Celcius.  The motorcycles in the race (for officials, staff and press), which had to transfer to the finish area despite the weather, had six motos go down during the ride, and they are currently stuck on the course at a local fire hall. 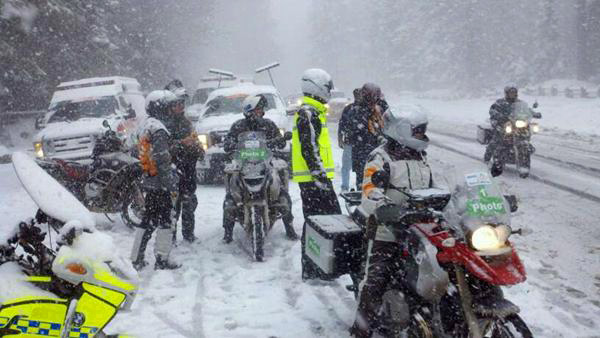 Subsequently, at a press conference at the finish line, the organizers said "Only in the last minutes it became clear that the weather was deteriorating rather than improving, and the decision was made by the technical time to cancel.  We didn't contemplate it would be snowing, wind and 28 degrees (Fahrenheit).""

Andrew Messick denied that there was a rider revolt, stating "If we had asked them to ride, they would have ridden.  They trusted us, and we made the right decision."

The attention now swings to tomorrow, with its planned start in Squaw Valley at North Tahoe, and the route over the Donner Pass, at nearly 7100 feet (2160 metres).  Organizers say that they have now turned their attention to the second stage.  According to Jim Birrell, "it depends critically on the status of the Donner Pass, because it is a critical choke point.  We have developed alternate scenarios, but won't speculate now."

The final decision will be made at 8:00 am (for the planned 10:15 am start in Squaw Valley).  One of the most likely scenarios is to move the start to Nevada City, the site of a Sprint and the start of the first stage last year.

- Svein Tuft comments:
"After riding towards the North end of the lake after the stage was cancelled, I realized it was the right call. Snow was definitely accumulating, and some of the climbs could have been pretty sketchy. I think it was hard on the line when they cancelled because everyone got in the mindset to race and were quite committed at the time. Tomorrow should be another interesting day. I feel sorry for the organizers. See you out there.
Svein"

- 21 Motos, needed for officials and media, are currently stranded in the mountains at a fire station. 6 were involved in crashes on the snow covered road. The road conditions yesterday meant they could not be moved and there was no announcement regarding how they would get to the 2nd stage.