In the third OCUP event of the 2011 season Bruce Bird Claims top spot at the 3rd annual Bike the Bruce Road Race in the Masters 1 category on Sunday May 15, 2011.

The event was held under challenging weather conditions with high 'gusting' winds up to 50kph and cool temparatures around 9 C. Fortunately the high winds that blew in from the North-East kept the rain clouds south of the race site.  The course was a combination of the routes used during the past two years and featured 3 laps around a 33km loop with a 1.2km finish straigh on a slight uphill grade into a front facing cross-wind. The course was basically flat with 150 metres of elevation gain per lap. The road was in great condition and clean, except for the back straight section of three kilometres on Bay street along Lake Huron which had loose gravel which made for some careful navigation along the curved road. The race began after a ten minute delay due to earlier races taking longer than expected a direct result of the high winds. The Masters 1 field had 63 participants, which was the largest group of the day by 20 riders. 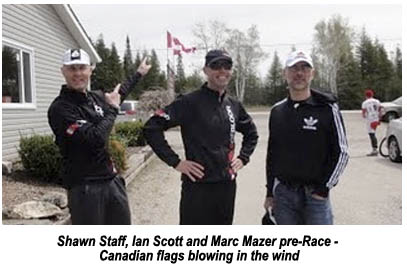 Wheels of Bloor showed up with all ten of our team members and we exerted our stamp on the race right from the start. The ten of us remained in a group as we awaited the start siren and then raced to the front of the race as soon as the race began. Team leader Radek Lukasik sent shock waves through the peloton along 1st lieutenant Bobby Mrvelj  as they broke away from the pack immediately gaining a 20 metre gap. The peoloton chased uncomfortably for the next 3 kilometres until closing down the breakas the peloton made the firt right hand turn and headed East.

The pace remained high and I quickly found myself drifting backwards front the front of the peloton to the back. I did not want to waste any energy at this point in the race and fighting for position within the peloton seemed pointless. When I arrived at the back of the peloton I looked around and saw Ed Makarchuk (Sound Solutions) who was biding his time, as per usual, waiting for his turn at the pointy end of the race when it mattered most. Ed who had parked beside me back at the campground parking lot told me that he was going to be aggressive today.

As we headed into Wiarton and the mid way point for lap one, a few riders at the back of the peloton began to struggle as a result of the high pace. I raced past them to remain with the group with Makarchuk in tow. By the time we took a left and started heading back West on Route 13 I had moved up to mid way through the peloton. I saw a small group of riders break away from the pack and noted that there were no black jerseys of our Wheels of Bloor team amongst them. I became more attentive and watched to see if any teammates would attempt to bridge up and saw that Bobby and Wieslaw Matuszczak were active near the front. The four man break continued to increase their lead as the rest of the teams appeared reluctant to help out and waited for our team to shoulder the load. I heard Radek call out for support from more of our teammates yet no further coordination. A few km's down the road Radek turned to me and said "Test your Legs". I launched myself off of the front of the peloton to the sound of other teams quietly yelling "Hup, Hup, Hup!", as they marked my movement near the front.

I manged to gain a little bit of ground on the peloton but found myself in no-man's land chasing down a 4-man break while the peloton stayed ever present behind me I pushed hard refusing to give up as I eventually pulled myself up to the break-away which contained Brian Kelly (Nacsworld), Stan Blazek (Kurzawinski), a team London rider, a team IFG rider. The team London rider called out to the other 3 riders that I had joined as they had slowed up a bit when I got close in order to allow me to join. I skipped a few turns in the rotation while recovering from the effort to bridge up. The 4 riders were working well together but the speed was not high enough. When I got to the front I gradually rasied the pace by a few kilometres per hour. As I rotated through, the rider from IFG called over to me "easy we still have 60km's to go", I knew right then that this was not a winning move and decided to keep the pace constant instead of pushing the pace and keep my turns the same duration as Stan's turns (he was directly in front of me).

Our 5-man break did not last long and the peloton engulfed us right before the left hand turn onto the 1.2km finishing straight at the end of the first lap. Confusion reigned over the next km as the group fanned out all over the road and slowed down. It was at this point that the break of the day was established with first a few and then a few more riders speeding up and moving to the front while the original break and the chasers recovered. I looked forwards a feared that none of our team were getting into the counter break. Fortunately Radek was on the case and called for Shawn, Tony Abramavicius and eventually Wieslaw to enter into the counter move. Wieslaw was the last man in as Ian, Bobby and I sat near the front of the remaining peloton and did not allow for anyone else to join the break without the three of us on their wheel.

The counter break was 11 men strong and included three of our riders (Tony, Wieslaw, Shawn), two riders from Novofit (Peter Mogg and Demetre Kalkounis), Paolo Eugeni (Z-Team - Wheels of Oakville), Marc Mazer (Chain Reaction), Steve Mckee (Nacsworld), Jeff Weber (Sound Solutions) and another rider. The main team that missed out was Team London who had six riders in the race. As soon as the break started to gain ground Team London cam to the from and in team time trial form the put in a huge effort to bridge the gap up to the 11-man break. Steven Baker (Team Cross) and Stan Blazek (Kurzawinski) also took turns driving the pace of the peloton during the second lap. The 11 men up front worked well together each taking turns while the peloton only had between 2 and 8 riders rotating thgrough the front. Teammate Leo St. Germain mixed in with the chasers in an effort to discourage their efforts much to the displeasure of the Team London riders. The net results of the collective efforts was an 80 second gap for the break by the end of the second lap.

Within the lead break there was no room for passengers. All members of the break had an understanding that they would take their turn at the front or drop off the back. Attrition slowly began to take place in the lead break as Jeff Weber (Sound Solutions) faded back to the peloton. This one riders action changed the outcome of the race. As soon as Jeff 's rejoined the peloton  his teammate Ed Makurchuk appeared at the front of the peloton and drove the pace over the next three kilometres into the wind pulling back 30 seconds by himself. Ed's efforts rejuvenated the exhausted Team London riders who regrouped at the front and worked hard over the next twenty minutes along with Steven Baker. Team CanHear Uganda riders also came to the front and did some work.

By the midway point of lap three the Masters 1 peloton had passed the Sr1,2 peloton. The six Team London riders had completely exhausted themselves. Ed Markarchuk continued to put in huge efforts along with Steven Baker while Ian, Bobby and myself sat in just behind the chase riders near the front of the peloton. The main group picked up a couple more riders from the break including Demetre Kalkounis (Novofit) who flatted and got a good change from the service vehicle as he was able to join into the peloton. With each rider that was picked up by the peloton a team mate changed roles from passenger to chaser at the front of the peloton, as Miguel Novo moved up when Kalkonis was brought back in.

The lead break was now clearly within site and the ever astute Kevin Davis (Nacsworld) was able to see that his teammate up ahead was having to continually close gaps in order to stay in the rotation of the break.
Davis moved forwards along with teammates Brian Kelly and Ilya Petrovsky just in behind the ever present Makarchuk, Baker and a resurgence from Team London. With only a 20 second gap and heading south on Bay street, Kelly buried himself with a huge effort and then peeled off for Petrovsky to close down the final gap. McKee saw what was happening and drifted back from the break to help tow his teammates forwards. Connection was finally make with 500metres to go before the left hand turn into the finish straight.

Marc Mazer who had been a force in the break launched an attack amongst the confusion. Kevin Davis expertly found a path through the confusion and joined up to Marc. I followed closely behind Davis, Wieslaw raced up to my wheel and Ian rode up to sixth position. Wieslaw moved ahead of me on one of the final turns but then slid wide on the final turn leaving a gap to Kevin's wheel. Wielsaw quickly closed in to Davis who slowed as Mazer slowed in front of him. I braced myself and launched a huge effort on the left side of the road with 1.1km to go into the wind. After about 30 seconds I moved over to the right side of the road and looked under my arm to see that I had a 50 metre gap on the field. I continued with my effort not wanting to be engulfed by the sprinting peloton in the final few metres. I was happy to see the finish line come into view but it did seem to be to be a long way off. I was able to keep my effort consistent and looked back to see that I had built up enough of a gap to win the race. I raised my arms as I neared the line and almost lost my balance as I quickly reached for my handlebars in order to steady myself.

Back in the peloton a group a of about 12 riders waited to contest the sprint. Kevin Davis led out and then faded as Ian Scott took the lead with 300 metres remaining and held on for a second place finish 8 seconds behind me. Rick Dagenais (Timmins Cycling Club) claimed the final podium spot. 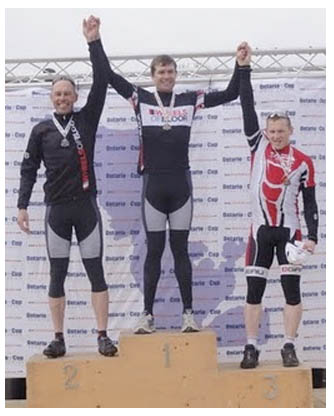