The ninth annual Tour d’Afrique Race and Expedition ended on Saturday 14 May with a double victory for two Canadian racers.

Paul Wolfe, and Tori Fahey, both from Alberta, Canada, took first place in the men and women’s category of the race which consisted of almost 12,000 km of cycling across the African continent.  Dennis Kipphardt of Germany, and Adam Stickler of the United Kingdom, took second and third place respectively in the men’s category.  It is the first time that any Canadians have taken first place in this epic event. 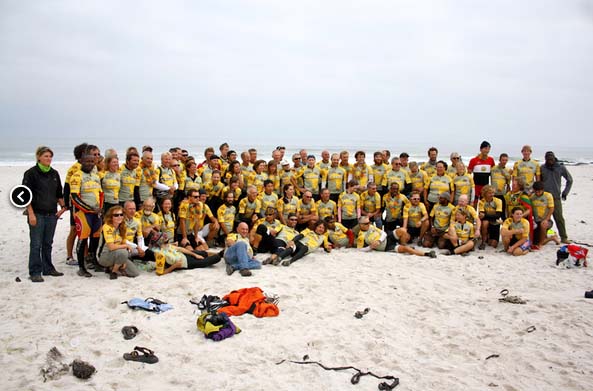 Tori Fahey not only beat her nearest competitor, Carrie Buckmaster of New Zealand, she also won every single one of the official stages of the race.  The race takes participants from Egypt to South Africa via Sudan, Ethiopia, Kenya, Tanzania, Malawi, Zambia, Botswana and Namibia. There are eight different ‘sections’ which are calculated as individual challenges for the racers.  The gutsy Fahey racked in all eight prizes for the various sections along her journey south.

The riders ended their four month journey at Cape Town’s EcoPark, which is situated next to the Green Point Stadium, where many of the 2010 World Cup Soccer matches were held. Tour d’Afrique were joined by nearly 300 riders of the local community from Cape Town’s Civic Centre to the EcoPark.

They were officially welcomed to Cape Town by the Minister of Transport, Robin Carlisle, the Executive Deputy Mayor, Alderman Ian Nielson, and Councilor Elizabeth Thompson from the Department of Transport and Special Projects. The larger Cape Town community was invited to join in the fun and activities at the Eco Park which included a DJ, prize giving and vendors educating the public on their various non-governmental activities.  It is the first time that an international cycling race and expedition is using the city of Cape Town’s new cycling lanes and a small victory for those who favour the bicycle over motorized transportation.