After a quick recovery from a fall at the midway point of the individual time trial, Clara Hughes powered through the rest of the course, beating Ukraine’s Hanna Solovey by ten seconds. Amber Neben, Jeannie Longo-Ciprelli and Julie Beveridge rounded out the top five.

“You’ve really got to win this because you can’t lose because of a crash,” Hughes told herself after her back tire slipped out on her while going around the roundabout. 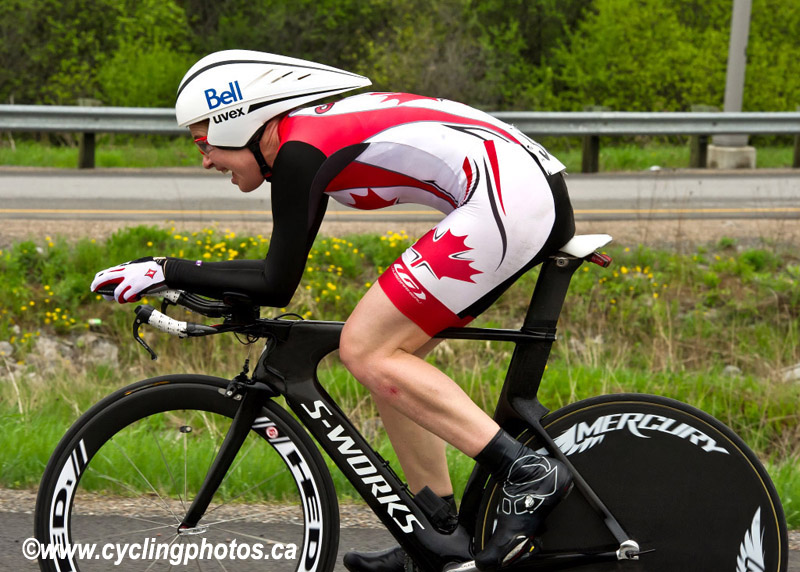 The rain stopped about half an hour before the first women took off for the [first of] two 8.67km laps through the Gatineau park and water on the road made the course slippery. Hughes says that’s not the reason she fell however.

“I just took the corner way too fast. I thought the roundabout was wider. And I came into it and I thought ‘I’m going down.’ I knew I was crashing before I did so I put my foot out and tried to throw my bike and go on my feet but it didn’t quite work out. But that’s why I got up so fast. If I had to fall I probably fell in a good way. It was a lesson for all the spectators watching – how to fall off your bike and get back on,” Hughes said after the race.

Hughes’ mechanic jumped out of the car when she fell and, as soon as she had her foot back on the pedal, he pushed her off.

“You’ve got to get going, don’t even think about it,” Hughes thought to herself as she set off for the second lap, chasing Longo-Ciprelli, who started one minute before her.

No one knew that the young Ukrainian rider, Solovey, would be a threat. She was one of the youngest riders in the race, although it seems that age doesn’t play a part in women’s road racing, with riders in the top five ranging from nineteen (Solovey) to fifty-three (Longo) years old. It was Solovey’s first time racing in Canada. 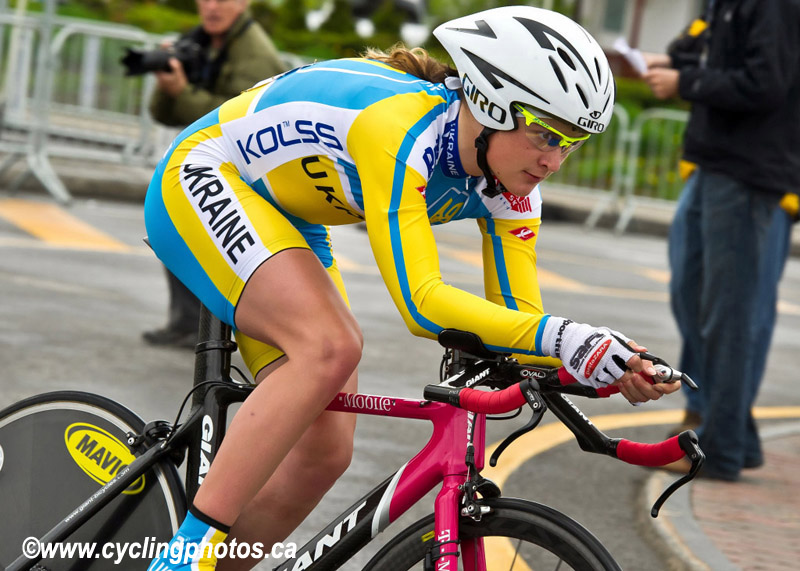 “I’m not happy because it’s second. But it’s ok. I tried. I’m young – I’m only nineteen. There were World Champions and very great sportsmen here,” she said.

One of those great riders was Hughes, who was the rider to beat after her strong performance at the Pan American Championships.

“I knew I was going to have to go really fast to beat Clara – especially being in her home,” Neben said on her way to the podium, before rushing off to the airport to catch a flight to LA.

Neben is racing in the Tour of California time trial tomorrow. Hughes however opted not to do the California race.

“This was a race that was key on my plan leading into the World Championships and my comeback to the sport. I got some invites to the time trial in California tomorrow after I won a few races earlier and I told them that I have a commitment to a race in Canada. I want to support a race at home, especially because the organizer went out of his way after last year to make this time trial a UCI time trial,” Hughes said.


Hughes felt a bit sore after the fall but was happy with her race, her first technical time trial of the year.


“I love time trials like this. And I wanted to win on Canadian soil,” Hughes said.

On Saturday Hughes will have another chance at Canadian gold as she is competing in the Grand-Prix Cycliste Gatineau Hydro-Quebec, a 103.4 km road race.

Clara Hughes not only raced for Canada today, she also raced for Daron Richardson, a young girl from Ottawa whose life ended tragically last year. Today, Hughes raced with a purple bracelet with the letters D.I.F.D. – Do It For Daron – which is the campaign to raise awareness and break down the stigma related to mental illness in young people.

“I wanted to win today in memory of Daron and in support of her family and dedicate this victory to her. I was really inspired me to keep going and put the crash behind me.”