14 Teams and 80 riders will compete on Saturday

Fourteen teams with competitors from ten different countries will be competing in the only UCI-sanctioned women’s road race in Canada, the 103.4 km Grand Prix Cycliste Gatineau tomorrow. The riders will complete eleven laps of a 9.4 km course , with racing starting at 11 am (EDT). 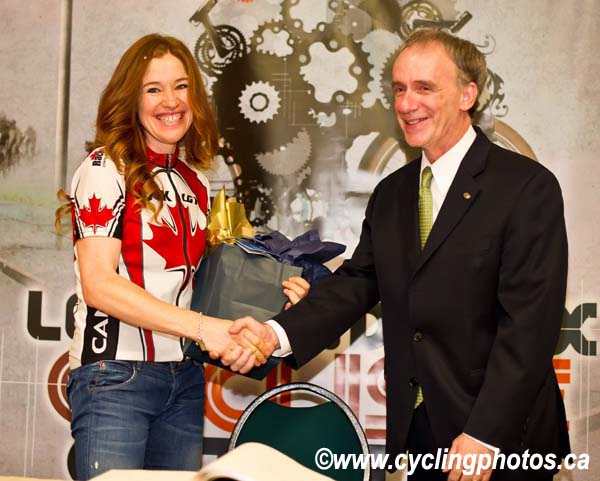 The mayor of Gatineau, Marc Bureau and Clara Hughes 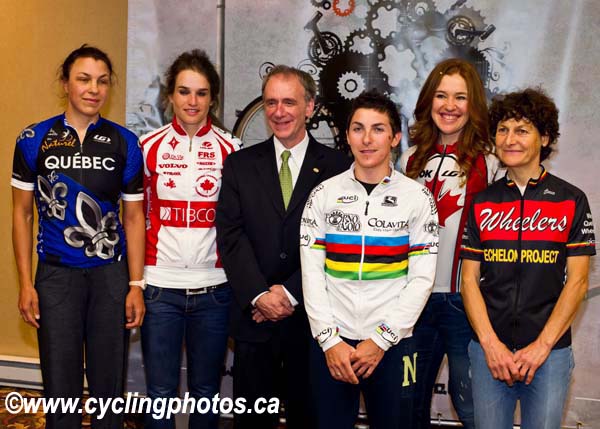 Longo-Ciprelli wore the colours of the West of Quebec Wheelers at team presentation today but it is still unsure whether she will be able to compete with them in the Grand Prix Cycliste Gatineau road race tomorrow.

“The situation is that, for a UCI Level 1.1, you’re not supposed to have composite teams. You’re allowed to have national teams, trade teams, regional teams and club teams,” said John Large, one of the race organizers and a member of the Wheelers.

“They’re all members of the club and their licenses are adjusted to show they are members of a Canadian club, while Jeannie’s license is a French license and there are no affiliations on French licenses other than French clubs. She’s the only one in that situation,” said Large. 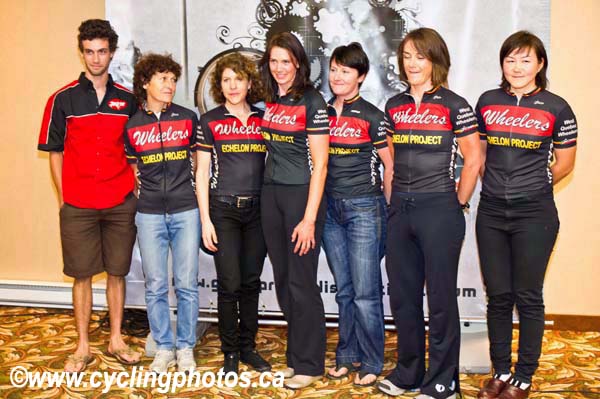 Jeannie Longo-Ciprelli and the West of Quebec Wheelers team

He was discouraged with the bureaucracy of the UCI, saying that it was already hard enough to find enough women to compete in the race.

“It’s a shame to think that she could be on the side of the road tomorrow watching. It just doesn’t make sense. And this is where the UCI rules don’t really apply, and shouldn’t be applied in the same way in Canada as they are in Europe where there are lots of clubs and lots of riders. As it is we’ve had to search the globe to get 75 to 80 riders, as opposed to the men’s circuit where there’s hundreds and hundreds. There shouldn’t be barriers to having any (of the) women participate,” he said.

If the right paperwork is in before the start of the race tomorrow Longo-Ciprelli will be able to race wearing the Wheelers colours. Large said that we won’t know until we see the presence, or absence, of the French rider on the line tomorrow.*

UPDATE:  Longo has been allowed to race