"This is the hardest course on the World Cup," stated defending World Cup women's champion Catharine Pendrel, and her comment was borne out by the number of top riders who struggled at round two of the cross-country series on Sunday in Dalby Forest, in the northeast of England.

The 6.1 kilometre circuit does not have any particularly long, steep climbs, nor is it at altitude, however, it is unrelenting, especially in the gusty wind that made every open section a struggle. 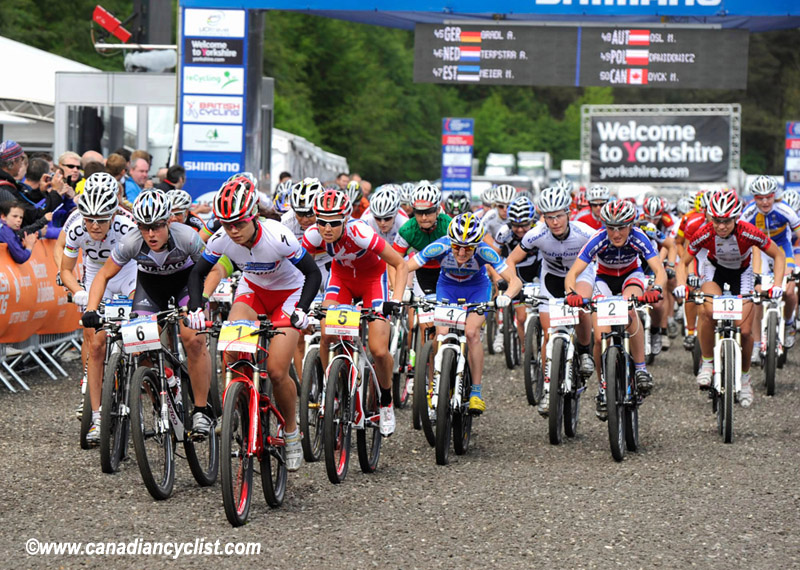 Ren Chengyuan at the front at the start

The five lap (plus start loop) women's race saw round one winner Ren Chengyuan (Specialized) jump into an early lead, with Julie Bresset (BH-Suntour-Peisey Vallandry) leading the chase.  Bresset was joined by Pendrel (after she chased up from being caught behind a crash in the start loop), world champion Maja Wloszczowska (CCC Polkowice), Lene Byberg (Specialized) and Nathalie Schneitter (Colnago Arreghini Sudtirol).

The young French rider bridged up to Ren on the second lap, and the pair worked together to distance themselves from the chase group.  Going into the last lap, Ren had a slight gap on Bresset, and appeared to be on her way to a second consecutive win, however, the Chinese rider inexplicably slowed in the final kilometres, allowing Bresset to ride away to her first world Cup victory, and the overall series lead.

Ren had clearly hit a wall, as the chasers began to reel her in.  First the Danish national champion, Annika Langvad, went by her, then Sabine Spitz (Central Haibike) and finally Eva Lechner (Colnago Arreghini Sudtirol), with Ren unable to hold onto any of their wheels, and barely hanging on for the fifth and final podium spot. 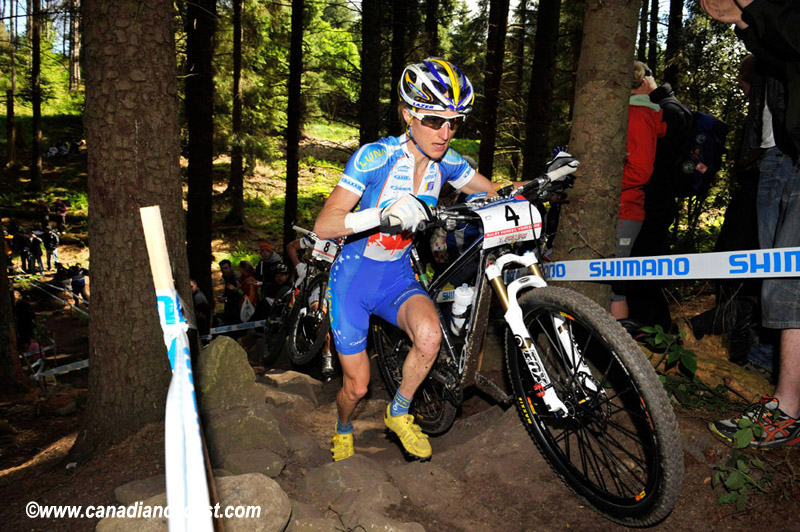 Pendrel, who had been at the front of the chase, suffered a similar lack of power, finishing seventh.  Marie-Hélène Premont (Maxxis-Rocky Mountain) finished 11th, after also being caught behind a crash, and then having a another rider fall on her, damaging her rear derailleur for much of the race.

"I got caught behind a crash at the start," explained Pendrel, "and had to work my way back to the chase group.  On the last lap I could see [the leaders], but I just didn't have anything left, and lost some time at the end.  But this is only the second race [of the series], so I know I can still win one." 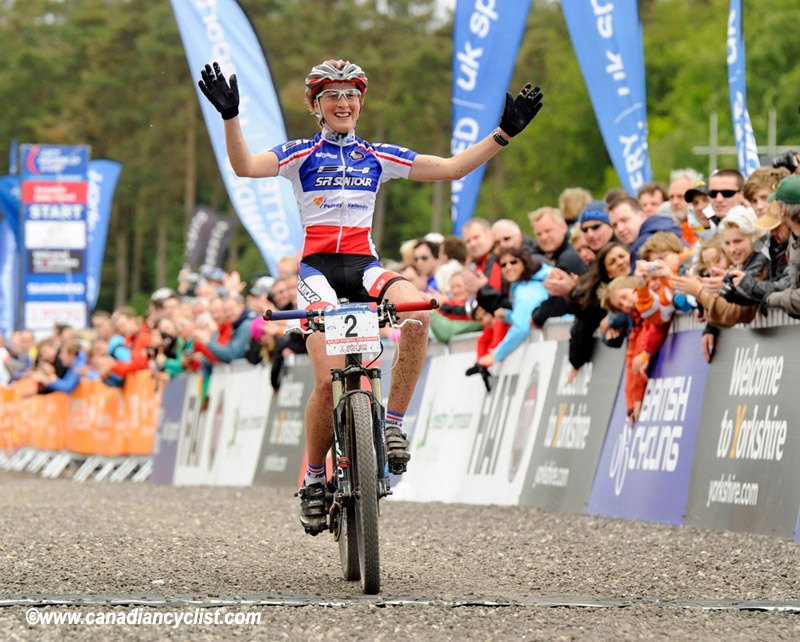 In the Under-23 women's race, Pauline Ferrand-Prevot (Lapierre) was clearly the strongest, leading from the first lap and setting the fastest lap times every lap.  Kathrin Stirnemann (Central Haibike) finished at 1:25, and Barbara Benko (Focus-MIG) took third.  Benko also took the lead in the Under-23 World Cup standings, since neither of the first two participated in the round one.  Mikaela Kofman (Team Canada) finished 13th, moving up steadily all race, while Laura Bietola (Team Canada) was 18th.

The men's six lap race was a one man show, with Kulhavy already in the lead after the start loop.  A chase group formed behind, with Marco Fontana and his Cannondale team mate Manuel Fumic doing much of the work.  Round one winner Nino Schurter (Scott-Swisspower), who won at Dalby last year, was having an uncharacteristically off day, and struggled even to stay with the group. 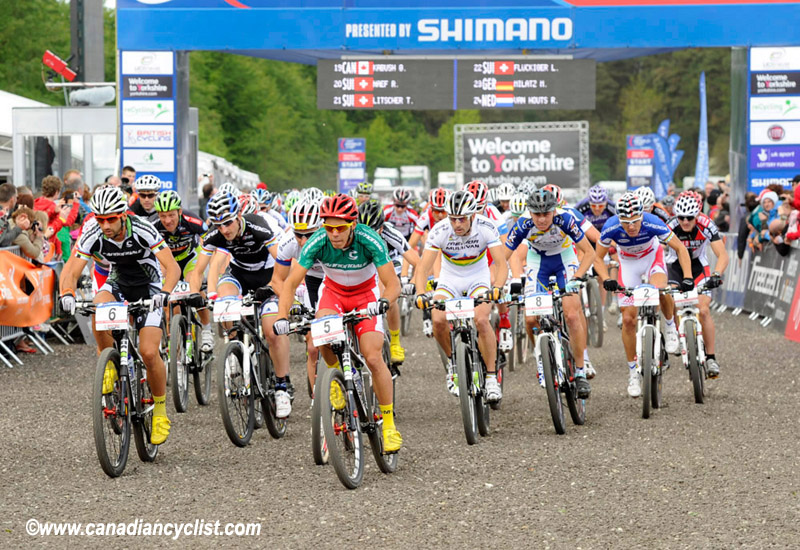 Julien Absalon (Orbea), after a poor start that saw him well back on the start loop, chased back to the group and immediately went to the front, but Kulhavy was gone.  Absalon dropped the rest of the chase group on the second lap, and chased hard or the next two laps, but could only close to within 20 seconds of Kulhavy and, by lap four, was losing ground to the big Czech rider. 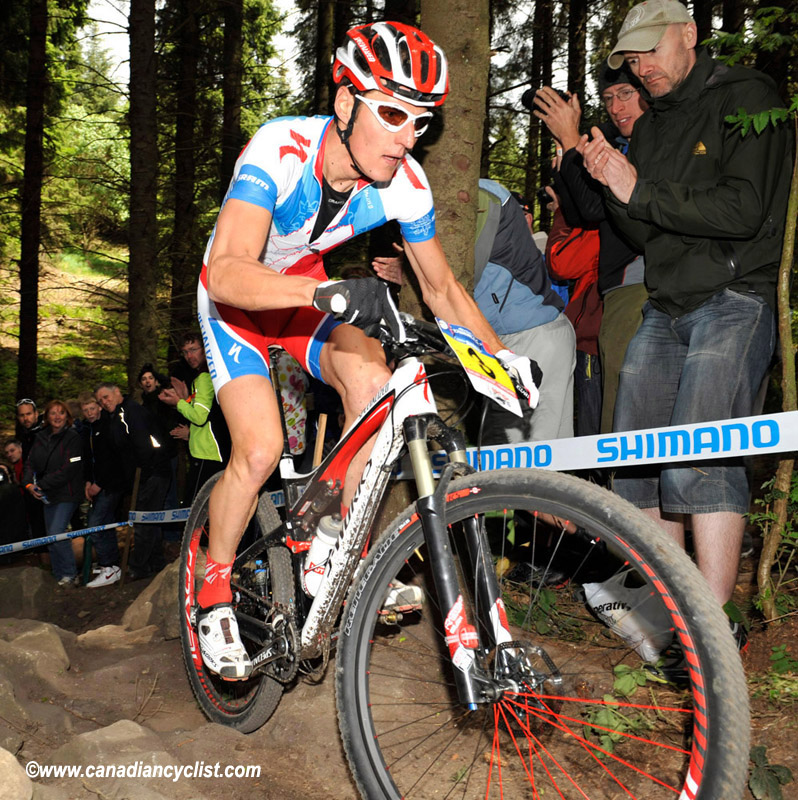 Kulhavy rode away from the field

Kulhavy and Absalon continued to pull away from the rest of the field, and the chase group disintegrated in the final lap, with Fontana outkicking Maxime Marotte (BH-Suntour-Peisey Vallandry) for third, and Fumic taking the final podium spot ahead of Moritz Milatz (BMC).

"This is a course that suits me," said Kulhavy, who took the World Cup lead from Schurter, only ten points in front of Absalon.  "I knew before the start that this would be a good course for me, and it was my plan to attack right from the start of the race."

Absalon was not too upset for coming in second, for the second consecutive year.  "Second is okay, I am happy with second.  I had a bad start, so by the time I got to the front [of the chasers] Kulhavy was gone.  It was a good race for me, and I am only ten points behind, and next week is Offenburg ..." - where Absalon has a perfect winning record for the last four years.

Derek Zandstra (Team Canada) set a personal best for a European World Cup, finishing 27th, six minutes behind Kulhavy.  Geoff Kabush (Maxxis-Rocky Mountain) was 45th and Max Plaxton (Specialized) was 48th.  Both Zandstra and Kabush were caught behind an early crash, and had to work their way through the field, while Plaxton had a worse start position after missing the first round in South Africa.

"I'm definitely happy with this result," said Zandstra.  "Geoff and I got caught in traffic after the start, and lost maybe 30 or 40 spots right away, but I was able to work my way up, and this will give me a better start position next week."  Zandstra had the 14th fastest split for the final lap.