Round Three of the Cross-country Series in Offenburg this Weekend

The Mountain Bike World Cup moves to Germany one week after Dalby Forest in the UK, for round three of the cross-country series in Offenburg.

Offenburg has become one of the modern classics of the World Cup, with a course that combines both technical and endurance requirements for a rider to do well.  This Germany town near the Swiss border has been awarded a World Cup for the fifth year in a row, and twice has been chosen as the best cross-country event of the season (2008 and 2009).  For 2011, the organizers have stuck with the circuit that has worked so well in the past - a 5.1 kilometre course, with a 1.1 kilometre start loop.

After the 1.1 kilometre loop, which will spread the riders out with a climb, the field heads out onto the course proper.  Last year, the women did five laps and a start loop, while the men did two more full laps, but the men's race has been shortened by one lap this year, in keeping with the current demand for shorter races.  It is very dry - Giant Rabobank rider Adam Craig calls it "the driest I have ever seen" - so the course is hard and fast, while rooty sections are more carved out and rougher than ever. 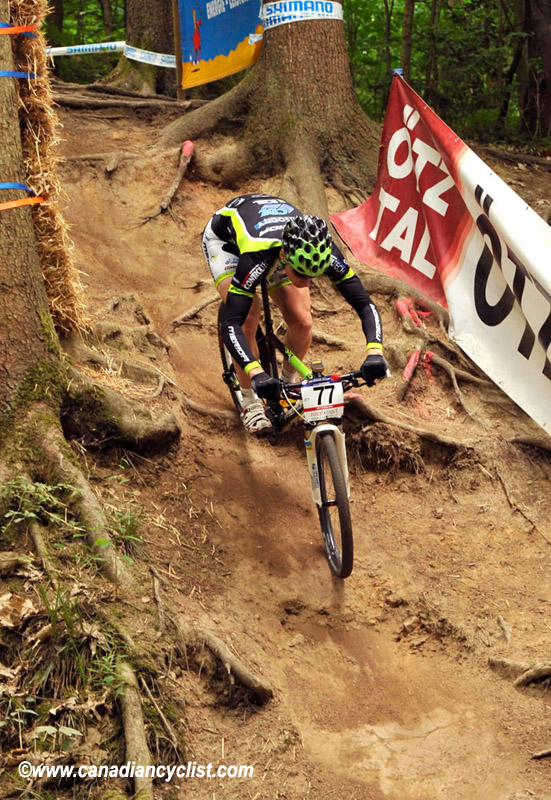 So far, the cross-country World Cup has produced new winners and series leaders at each event, with Julie Bresset (BH-Suntour-Peisey Vallandry) winning in Dalby and taking over the women's series lead, and Jaroslav Kulhavy (Specialized) doing the same on the men's side.  However, the men's series is still tight enough that we could see another change in the lead in Offenburg.

For the women, Bresset will not face competition from round one winner Ren Chengyuan (Specialized), who has crashed in training, injuring her back; the team says that she will not race.  However, she will face the return of Irina Kalentieva (Topeak Ergon), who missed Dalby due to visa problems, and is locally based.  Also likely to be in the hunt will be 2010 Offenburg winner and World Cup overall winner Catharine Pendrel (Luna), plus German star Sabine Spitz (Central Haibike).  Bresset has a 60 point lead on Ren in the overall standings, but the next rider - Danish champion Annika Langvad is 170 points behind, so Bressett looks safe to hold onto the leader's jersey at then end of the spring rounds of racing.

Kulhavy put in a dominating performance at Dalby Forest, but he is only ten points ahead of Julien Absalon (Orbea), who has the unique distinction of being the only man to have ever won at Offenburg; a clean sweep of the past four years.  Can Absalon make it five consecutive wins, after having finished second in each of the first two rounds of 2011?  While the Olympic champion has not won a World Cup this year, he has been the most consistent rider, with a pair of second places.

The action begins Friday evening with the second round of the short track Eliminator series, followed by the Junior and Under-23 men cross-country races on Saturday, and culminating in the Elite races (and Under-23 women) on Sunday.