After a successful introduction at the Dalby Forest World Cup in England last week, the Eliminator short track event returned today for the third round of the World Cup in Offenburg, Germany.  Czech cyclo-crosser Pavla Havlikova beat Eva Lechner (Colnago Arreghini Sudtirol) in a sprint for the women's title, while Thomas Litscher (Felt Oetztal X-Bionic) rode away from the rest of the field to win the men's race.

Unlike in England, where the event took place in the centre of the town of Pickering on an urban course, Offenburg offered a grass course that made the race closer to a short track race.  Rain earlier in the afternoon made the corners slippery, and riders had to take care not to enter them too fast, or risk sliding out.

Organizers changed the format slightly from the previous event, running six at a time rather than four.  This reduced the number of heats and made the races more tactical with the bigger fields.

Women
Havlikova was the fastest in qualifying, and won both of her heats on the way to the Final.  Lechner, on the other hand just squeaked into the Final after finishing third in her Semi.  The Final was just about these two riders, with Havlikova taking an early lead, Lechner then passing the Czech rider to lead for the majority of the race before Havlikova came back on the final grass sprint to the finish.  Both riders threw their bikes on the line, and it took a photo finish to determine the winner.  Annie Last of Great Britain took third. 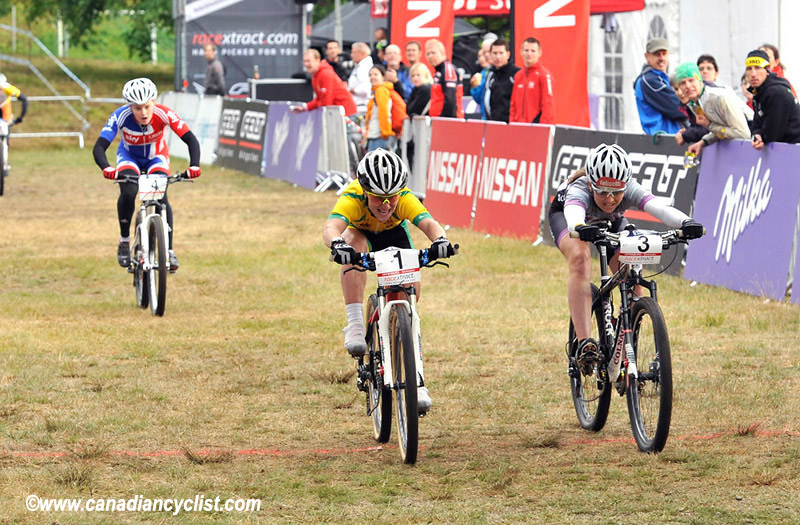 Havlikova defeated Lechner in the Final

In qualifying, Litscher was only third, behind Manuel Fumic (Cannondale) and Brian Lopes (US National).  Litscher won both his first and second rounds to move on to the final.  He was joined by Lopes, Severin Disch (Thoemus), Simon Gegenheimer, Martin Gujan (Cannondale) and Daniel Federspiel.

Lopes had ridden strong tactically in the first two rounds, recognizing that while he had superior speed, his endurance didn't match the cross-country riders.  He took the holeshot in both of the opening rounds, then backed off to conserve energy in second place before sprinting at the finish.  In the Final he slipped his left pedal coming out of the start and was out of the running before the first corner.

Litscher left nothing to chance, grabbing the lead immediately and riding away from the others, to the point that he could coast across the line with his arms in the air, while Disch outsprinted Gegenheimer for third. 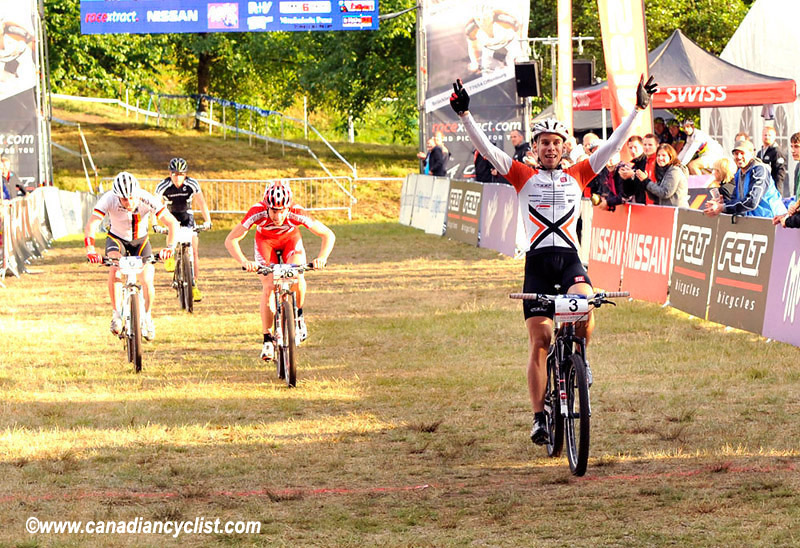 "I like the event," commented Lopes, "but I think they need to add more technical stuff, so it is more mountain biking.  In the Final I got my first pedal stroke, but I didn't get my foot in, so it was over for me.  I needed to get the holeshot because I knew I was already tired after the first two rounds and couldn't come from behind."