Team Garneau Wins with a "Relative" Unknown at Mardis Cyclistes

Given the strong international presence on this evening’s start line, there were guesses that an Australian, a Japanese, an Estonian or even a French cyclist would win the first stage of the Mardis Cyclistes bicycle races in Lachine. But it turned out to be Rémi Pelletier- Roy (Garneau), a 20-year-old cyclist from Longueuil, who won the first stage of the men’s pro Elite race of the Mardis Cyclistes 2011 season.

Pelletier- Roy rode the 50km of this criterium in a time of 1 hour and 32 seconds, giving an average speed of 49.5 km/h. Martin Gilbert (Spidertech), an Olympic cyclist from Chateauguay and former Mardis champion, finished second while Arnaud Papillon (Garneau) completed the podium. 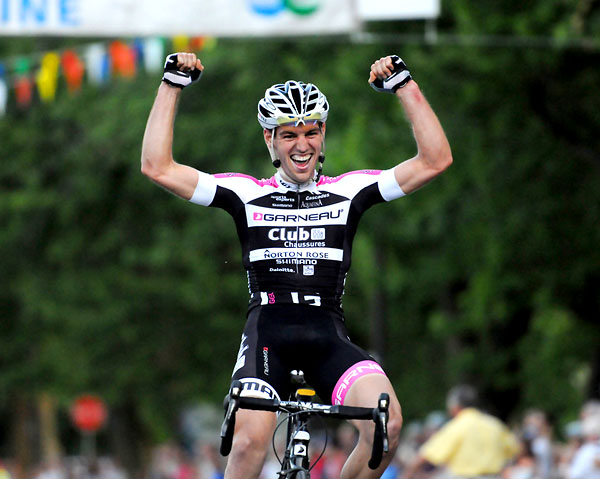 Team Garneau dominated the show for the entire evening. On the 22nd of 31 laps, the guys in the pink Garneau jerseys moved forward. The breakaway group--including Pelletier-Roy, Shaun McCarthy and Papillon -- quickly built up a 20 second lead over the pack. Although Garneau is based in Quebec City, team member McCarthy is from Australia.

A few laps from the finish, Jean-Samuel Deshaies (Rocky Mountain) pulled off a coup by catching up with the breakaway group. The Garneau cyclists, however, quickly neutralized the threat.

“This is my first ever victory in Lachine and that should boost my confidence. In fact, my team mates have perhaps more confidence in me than I do,” explained Pelletier- Roy. “When Shaun (McCarthy) said, ‘Remi, you should go for it’, I wasn’t too sure that my legs could do it. But I went forward and never looked back!”

Pelletier- Roy rode the last lap of the race solo  to win the first round of the 2011 series.   Behind him, other members of the breakaway group were swarmed by the pack just before the finish line.

Martin Gilbert, a four-time champion of the Mardis, was somewhat disappointed with the race. His team, Spidertech, is of a higher calibre than other competing teams and restricted to no more than three cyclists to the Mardis races.

“Yes, it was disappointing not to have finished first. I let my team mates, Guillaume (Boivin) and Charly (Vives) do all the work. But at the same time, I was somewhat less fresh for the sprint. With only three guys in the field, we had to gamble,” said Gilbert. He remained happy, however, to take second place.

Arnaud Papillon led the pack for eight of 31 laps. This earned him the black jersey to distinguish him as the most aggressive cyclist of the race.

Defending champion, Jean-François Laroche (Fantino Mondello – Cycles Régis), went down in a spectacular crash only five laps from the finish. He nonetheless managed to end up in sixth place in this evening’s race.

“A cyclist went down directly in front of me and I tried to pass over top of him. I didn’t manage to get high enough and was catapulted into the air. It was like crashing into a sidewalk at full speed. That was a tough race!” Laroche indicated.

Despite the mishap, Laroche waxed philosophical, saying, “The season has just started. People saw our (team’s) poorest performance this evening. We will only get better from here.”

Among the minimes, it was Édouard Laparé-Morin (Espoirs Laval) and Melyssa Fortin (Vélo Club Longueuil) who won their respective races.

Results for all categories with lap details