Tuesday night's 30 lap race had a total entry of 19 in three categories, with 4 women and 1 youth starting with the men. After the initial 2 neutralized laps, the group stayed together for another 3 laps before the slower riders started to drift off the back.  The first prime was won by Ian Smith from Warren Muir, with the rest of the bunch hard on their heels. The everything settled down until just before the halfway point, when Smith and Muir were joined by Lionel Space and Mike Sevcov to establish a 5 second gap.

By the time the second prime was approaching, the bunch had re-formed and the sprint was won by Muir , with Iain Hay and Charles Hamer close behind. Despite several abortive break attempts, the race stayed together for the next 7 laps.

Just after the bell signaled the third prime, Charles Hamer touched Bryan Rehill's rear wheel and fell heavily. There were no other casualties but a number of the bunch stopped to check out Hamer's condition and the prime was voided. Thanks to Chris Cameron who checked Charles for any breaks or other injuries. A number of the riders had avoided the crash and soon the pace picked up again with a reduced group.

The prime was rescheduled with 4 laps left and Warren Muir took this one too, just edging out Mike Sevcov, who was clearly disappointed. However, Mike did win the gambler's prime with one lap remaining.

The final sprint was a replay of last week's criterium finish, with Muir taking top honours from Ian Smith,with a watchful Lionel Space third and Sevcov rounding out the top four.

In the women's event, Janna Gillick had stayed with the men's group right up to the crash, when she stopped and then joined in again a lap down. She still won, with Cheryl Morch, who had been lapped earlier, a few seconds behind.

Brodie Hay was awarded the youth prize but he would like to see a few more juniors and cadets come out.

Thanks to Ian Smith for donating $20 towards the prizes. 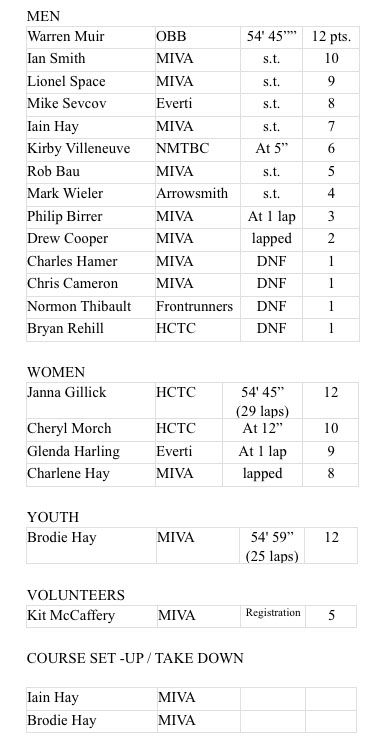 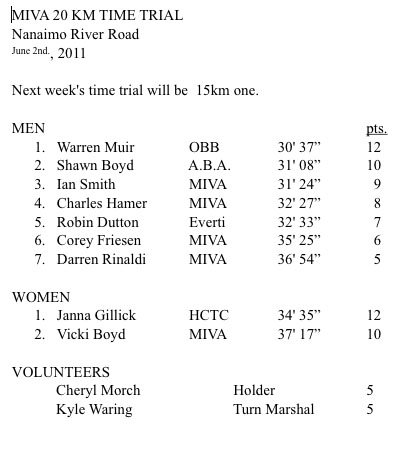