Holland, marked the final one day UCI race on the BC Elite Women's European campaign, the UCI 1.2 Therme Kasseieomloop. This race of 126 kilometres would be the sixth race since the women's team arrived on May 18th and the third race in the past four days.

The Kasseieomloop is translated to Cobblestone Circuit. For those that have raced in Holland, the usual terrain is flat with very tightly interlocking paving bricks on the road and lots of wind. 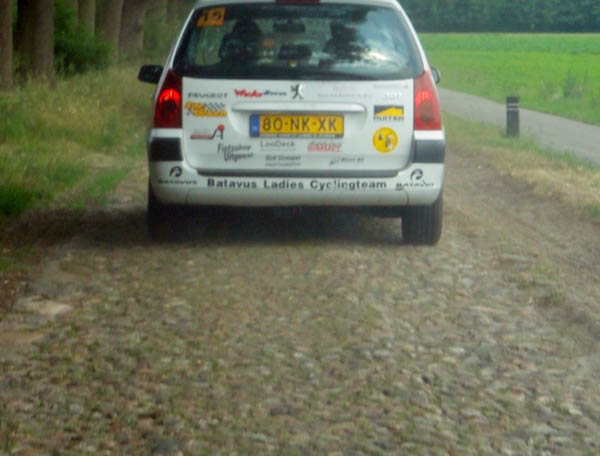 The cobbles of Therem Kasseieomloop

A total of 16 kilometres of cobbles spread over four sections was the order of the day, but added on to this was one seven kilometre section of good old North American potholes. The remainder of the course had some very narrow sections and about 20 kilometres in total of older rough paving bricks. Luckily for the riders, the wind was at a minimum at race start, a rarity in Holland. The tires were aired down to 90-100 PSI, and every nut and bolt was checked by Ronny the mechanic.

9:30 am the first test, only 3 kilometres into the race, with 7 kilometres of potholes. No punctures in the first section. At 33 kilometres, the first 3.6 kilometre true cobbled section came. There was a split in the group but four of our five were on the good side of it. Jessica Hannah paid dearly for tail gunning but had a group to work with.

With little sign of help, Jessica rode across the 45 second gap solo, so we were were all back in the hunt. At just under 60 kilometres, the next section came. This one was 3.7 kilometres. Again Cycling BC riders made it through in the front group (Jessica Hannah had to do some caravan car jumping to stay in the lead group ). Now there was excitement in the follow car. These events can have the best laid plans but the cobbles and crashes can wreak havoc, so even remaining optimistic is difficult.

As we neared the third section Ronny and I did not mention crashes or punctures. We had been passing dropped riders, crashed riders, and probably 25-30 of the 125 starters had punctured by now. Five minutes had passed since the third section was down and still all Cycling BC riders were firmly tucked in the front group. This was the crucial time to wait and see for slow punctures from the cobbles. What was more impressive is the speed and bike handling of all these top women. They were powering over the cobbles at 40-45 kph. 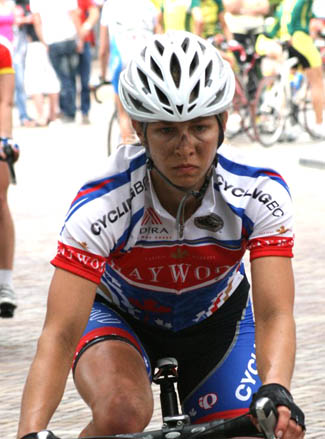 Now we had only 35 kilometres left in the race and one 3.6 kilometre cobbled section left at the 14 kilometre to go mark. Anticipation and optimism ran high. With the finish ever closer, the race to hit the final cobbles first was the fiercest yet of the day. With the group strung out and on edge, and the fatigue of 110+ kilometres in their legs disaster struck Cycling BC. A Batavus rider went down hard one kilometre before the cobbles setting off a chain reaction. Claire went down with a puncture. Britt, Jenny, Jasmin and Jessica were all caught on the bad side of the split which was instantaneously at 45 seconds. The front group of 40 riders did not ease off the gas and left the remaining 40 to chase.

Cycling BC was running out of time and kilometres to play at the front. It was all hands on deck, and Jasmin, Claire, Britt and Jenny were all taking massive pulls at the front of the chase in a last ditch attempt to get someone across. It all went for naught as the gap was too much to make up in the ten kilometres to the finish. All the team finished in the second group, but not without a valiant effort.

Valuable lessons were learned and the team proved that they do very much belong at the top echelon of women's racing. The learning curve has been steep but it has been managed very well by the riders. Next up is a 2-3 day recovery break from racing, then a series of Belgian kemesses, another two day racing break, and with the trip finishing off with the UCI 2.2 Raboster stage race in Middelburg Holland, May 16-18. Then the team flys back to contest the Canadian National Championships in Burlington.

I wish to personally thank the sponsors and supporters of Cycling BC. The program we have been able to put into place from your support for the Elite Women and U23 Men has been outstanding. There is no better place to learn the craft of bike racing than Belgium and Holland. The wind and hard racing teaches these developing riders the most difficult parts of bike racing that will stay with them for the rest of their careers. The experience is invaluable. 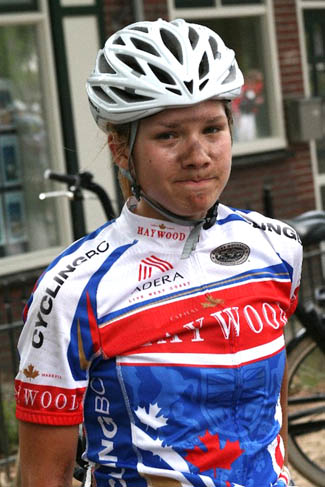 Right top: Jenny right after finish, nothing in tank