GranFondo Canada has announced a new 115 kilometre route featuring a dedicated lane for the inaugural RBC GranFondo Kelowna on July 16th in the Okanagan Valley.

"We are incredibly excited about this route," said GranFondo Canada co-founder Neil McKinnon. He added, "We love the idea of touring the lakes of the Okanagan Valley - the route is spectacularly beautiful."

Cyclists will begin their journey at Waterfront Park in Kelowna riding north on Glenmore Road with great views of the lake. As they merge onto Okanagan Centre Road and Carrs Landing, cyclists will have the memorable experience of riding alongside beautiful Okanagan Lake after which they will start a 6.5 kilometre climb to Predator Ridge. Riders will conquer the much talked about Quasi-Pavé section before topping out at Predator Ridge Drive with views of the notable Predator Ridge Golf Course.

Halfway through the ride, cyclists will enter the City of Vernon and enjoy some local scenery before venturing southbound onto Okanagan Highway (Highway 97), which will showcase Kalamalka Lake and Wood Lake.

During the final portion of the ride, cyclists will find themselves in familiar territory as they make their way through Oyama and Winfield before passing through vineyards on Lodge Road and Glenmore Road. Finally, they will arrive at Waterfront Park to celebrate the victory of their accomplishment with fellow cyclists, volunteers, community members, family and friends.

Cyclists will be provided with a scenic and challenging ride on a dedicated lane through the Okanagan Valley with an approximate elevation gain of 1200 metres. It will be a ride to remember and promises to become a Canadian classic.

"The RBC GranFondo Kelowna is an incredible opportunity to cycle alongside hundreds of other enthusiastic cyclists - beginners to advanced - in one of the most beautiful places in the country," said Karen Borring-Olsen, RBC Regional Vice-President, Okanagan, who is also signed up to ride the event. She added, "RBC is delighted to support what will truly be a world-class event right here in the Okanagan."

There are still limited spots available for the 2011 RBC GranFondo Kelowna, for information on how to register please visit: www.RBCGranFondoKelowna.com. 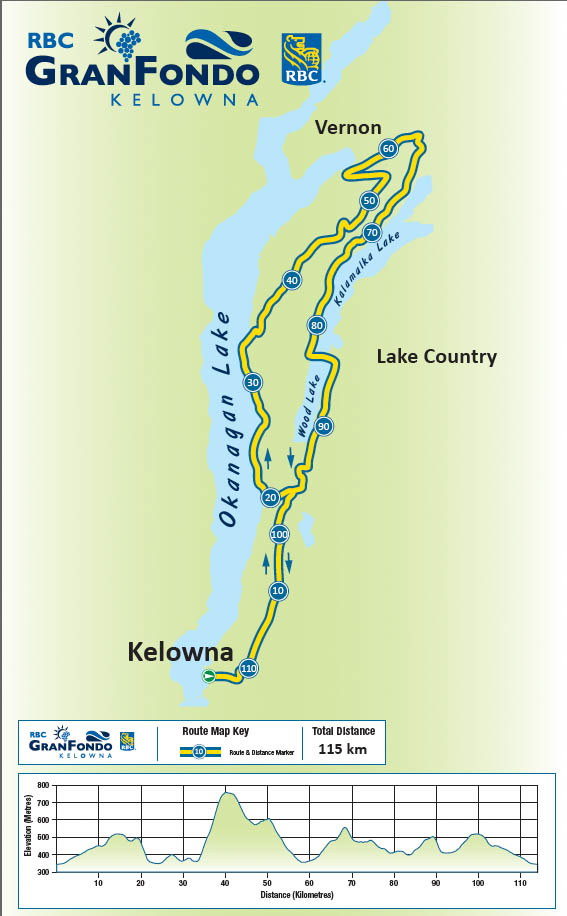