Graves and Labounkova takes wins in Round 3

Despite rain and cold temperatures, the third round of the 4 Cross Mountain Bike World Cup in Leogang, Austria, produced some of the most exciting racing of the season.  Romana Labounkova and Jared Graves (Yeti-Fox Shox) were the class of the field, taking the women's and men's titles, respectively.

Czech rider Romana Labounkova, after missing the opening two rounds of the 4 Cross World Cup for BMX racing, proved her bronze medal at last year's world championships was no fluke with her win at the third round.

Cold temperatures and rain had no impact on the Czech rider, who qualified first and easily won her first two races to advance to the Final, with American Melissa Buhl (KHS) also qualifying from the same half of the draw.

Anneke Beerten (Milka-Trek), the winner of the first two rounds and the World Cup leader, had a similarly easy path to the Final after qualifying second.  Swiss rider Lucia Oetjen was the final rider to make it to the medal race. 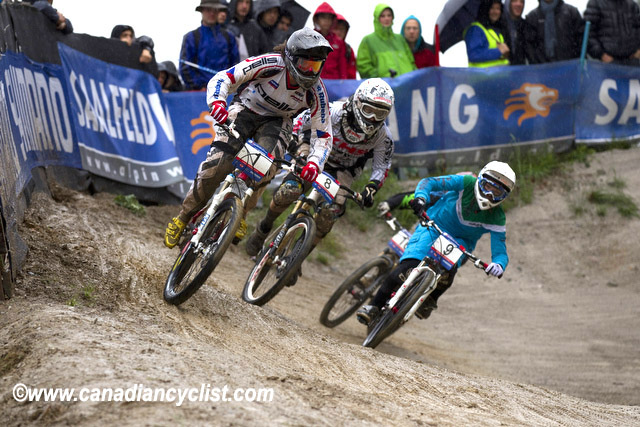 In the Final, Labounkova used her BMX speed to take the holeshot into the first corner and rode away for the win.  Buhl just beat out Beerten for the second spot into the first corner, and was able to hold off the Dutch rider through the rest of the 450 metre run to take second.  Celine Gros (Morzine-Avoriaz/Haute-Savoie) took the fifth and final podium spot by winning the small final.

"I was just fast in the gate, and that was the biggest part of my success," explained Labounkova.  "After that, I just did a clean run, which was perfect.  You have to be first into the first corner, and then you can ride your own race in these slippery conditions."

Beerten continues to lead the overall standings, with 250 points to Oetjen's 130.  Gros sits in third, ten points further back.

After a lapse of concentration last weekend at round two in Fort William, Scotland, saw Graves miss the Final, the Australian was eager to reassert his dominance on the men's field, and did so with authority in Leogang.  Graves qualified first, and advanced through the first four rounds with ease, grabbing the holeshot in every heat, and extending his lead on every section of the course.

Switzerland's David Graf continues to improve at every race, and joined Graves for the Final from their half of the draw, from a hard-fought semi-final containing round two winner Roger Rinderknecht and Romain Saladini.

From the other half of the field, former World Cup champion Michal Prokop was equally strong to advance, while world champion Thomas Slavik (RSP 4 Cross) took the final spot for the Final.

In the Final, it was Graves in the front from the start to the finish, while a tremendous battle was being fought behind him.  Prokop grabbed second place into the first corner, but Graf made a daring move by taking a little-used second line through the middle of the course, which paid off and allowed him to overtake Prokop for second, while Slavik did the same to take third.  Round two winner Roger Rinderknecht won the small final for fifth. 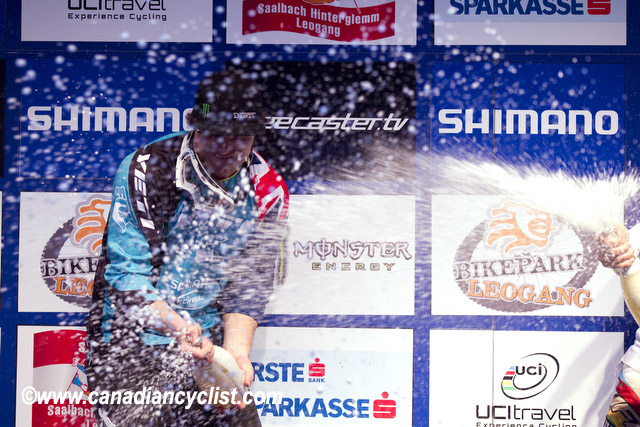 "I had my worst race in about three years last week in Fort William, so to get the win back was exactly what I hoped for," commented Graves.  he also said, that to avoid crashing in the muddy, slippery conditions, "I just tried to ride like I did in practice, not do anything too silly.  When you're in that race frame of mine, you just let it go.  I tried to hold everyone up abit [coming into the first corner], to try and stop that 'high-low' move, and I think that worked really well.  That was a good tactic, and I'm really happy with it."

Graves now leads the men's standings with 300 points, 50 points ahead of Graf, while Rinderknecht and Prokop are tied at 100 points in arrears.