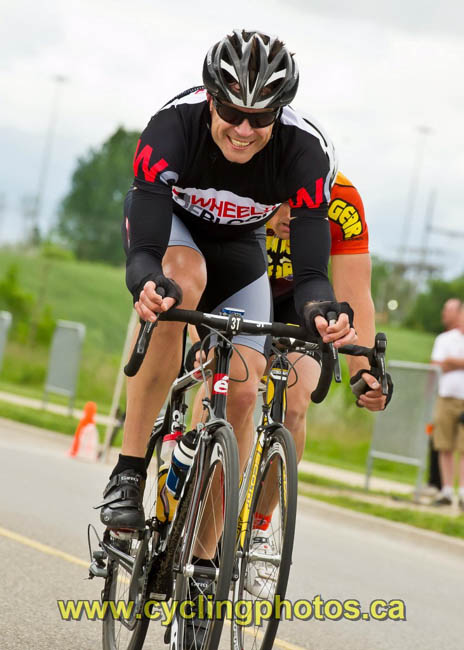 On Sunday June 12th in Kitchener Ontario in the 5th OCUP road race of 2011 season, Wheels of Bloor placed five riders in the top ten. The top three places were claimed by Kevin Davis (Nacsworld) in third, Chris Firek (Gears) in second and I in first.

The race began under overcast conditions with seasonably low temperatures nearing 18 Celsius and gusting winds up to 30kph. Most of the 81 riders who lined up at the start of the Masters 1 race at 1:35pm EDT wore arm-warmers along with their team kits.

In the past the race looped around a 4km fairly technical course. This year thanks to a new wide road having been paved as an extension of the start finish straight, and extra two kilometers were added. The new 2km out and back stretch was perfectly flat but made challenging by the cross wind out of the North-West and a hairpin turn at the end.

The race began on time with an attack by Radek Lukasik (Wheels of Bloor) from the start line. By the time the pack made it to the hairpin for the first time, Radek’s lead was down to just 50 meters. I was at the back of the group as we headed into the hairpin and witnessed Gary Weinstein (Z-Team) clip the right side of the road and fall almost in slow motion to his right. Fortunately Gary was not hurt and was able to rejoin the main pack almost immediately. The group was back together again by the time we turned right after exiting the new 2km section of the course. The pace remained high through the first lap and two riders; one from Z-Team and Bobby Mrvelj (Wheels of Bloor) established a 10 second lead on the peloton.

The time gains of any attacking riders were easy to judge on the out and back section heading into the hairpin. The Z-team rider and Bobby stayed away for an entire lap before being brought back into the fold. Each time a rider jumped off the front they ran out of gas quickly in the punishing wind and were subsequently swallowed up by the group. When more than two riders attempted to jump the group the entire peloton picked up the pace and would not let them gain any time. 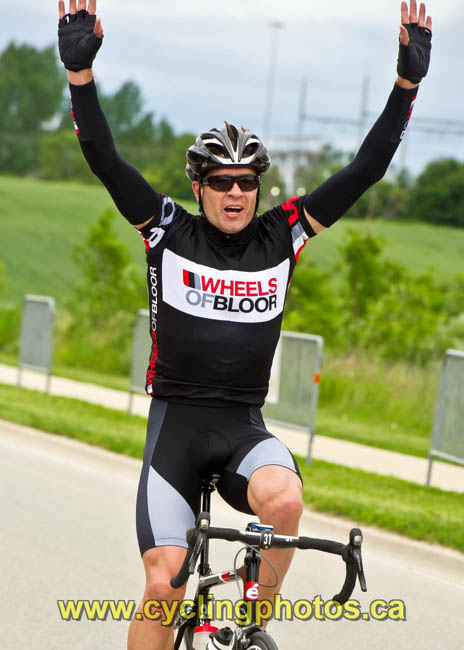 In lap 3 or 4 in the new section of the course the pack was ushered left by a race commissionaire far across the yellow dividing line to avoid a downed rider from the Elite 1&2 race that had begun 5 minutes before our race. As I sailed by the rider I immediately recognized the fallen cyclist as John Stewart. I had spoken with John, his wife and his young daughter before the race and we wished each other well. The accident must have happened very close to where his family had set up to watch the race. John was lying face down on the road and not moving. It is a terrible thing to see a fellow competitor in that condition and it certainly took the racing impetuous out of our group temporarily.

Each lap took about 9 minutes to complete, and by the time we rounded the course again John had not moved but was being attended to by an EMT crew. The next time around the course on the back section a race commissionaire yelled out to us from the lead car’s sun roof that we would be following the old course in order to let the emergency vehicle in and out. I did not see John again. I wish him well I know that all of us do.

The next time around at the top of the climb, I got into a move with my teammate Ian Scott, Steven Baker (Team Cross) and another rider, but we only managed to hold off the peloton for a very brief period of time. I kicked again near the end of the lap but only managed to string out the peloton. I kept waiting for the rider on my wheel to come through but it did not happen. I rode near the front along with Baker for half a lap and then attacked again on the climb. Once again I could not break free. By now I needed to recuperate and faded back into the front portion of the peloton.

The next time out of the hairpin Ian Scott attacked into the wind and quickly gapped the pack. Unfortunately the chemistry of the group did not work in his favor as the few stragglers struggling to bridge up to Ian brought the whole of the peloton with them.

The next move was led out by Weislaw Matuszczak (Wheels of Bloor), but he was only joined by one other rider and was not able to gain much more than 10 seconds on the peloton before being brought back into the peloton after close to a lap on their own.

On the back section, Brent Aquino (Z-Team) took a flier and moved 70 meters ahead of the group. The peloton seemed indecisive for a minute as Aquino increased his lead to 150 meters. Brian Kelly (Nacsworld) responded with a powerful counter move. Ilija Petrovski (Nacsworld) and Ed Makarchuk (Sound Solutions) allowed Kelly to gain 50 meters before they made the next move together. Baker and I rode the front of the peloton and waited for another rider to attack from behind so that we could latch on to their wheel, but none came.

Into the new stretch of road, Petrovski and Makurchuk caught up to Kelly and then quickly dropped him as they worked their way up to Aquino. By the time we rounded the hairpin the three riders had consolidated into a cohesive break. I was not happy about the composition of the break because the three riders were all strong and there was no representation from our team, which meant that we would end up chasing unless we had a rider bridge up. Don Zuck (Z-team) who was riding second wheel just ahead of me in the peloton was intent on working the situation to his teams favor. Don called out to the lead rider to let the Wheels of Bloor team do some work. The pace slowed but fortunately a rider from team IFG attacked up the left side of the road and I sprinted over to his wheel as he zigzagged across the road. I caught up to him and then rode by as I attempted to bridge up to the three-man break. I could hear Zuck just behind be but did not look back to see who else was with us.

I caught up to the 3-man break on the downhill section and looked back briefly to see that Zuck and Chris Firek (Gears) had bridged across making us a group of 6. I rested in behind the lead three for a few moments and then drove the pace up the climb on over the other side. The two Z-team riders were gapped with this effort and Petrovski, Firek, Makurchuk and I settled into a regular rotation in our 4-man break. I stole a glance behind each time I rotated through and could see that the peloton was no more than 20-seconds behind us.

Just after the hairpin it was great to see my teammates at the front of the chase group helping to control the pace and cheering me on. The Nacsworld team also helped to discourage the chase in support of their man Petrovsky. With support of my team back in the peloton I pushed on hard during the next lap hoping to increase our lead. At the back end of the course the commissionaire called out from his car warning us to observe the yellow line rule leading up to the downhill section of the course. As we rounded the hairpin with just fewer than four laps remaining I looked out up the road to see if we had stretched our lead over the peloton, however, the peloton was nowhere in sight. I called over to Ilija stating that something was wrong. As we rode to the end of the new road and turned right, we saw all of the riders in the main group being held up by a commissionaire. The riders were all extremely supportive and cheered for us as they stood straddling their bikes. It was an extremely bizarre scene and felt like a relay race where the four of us carried all the hopes of our respective teams, but it seemed like we were getting support from everyone.

Firek sat up a bit and Ilija called to him to keep racing. I was not sure if the peloton had been disqualified or if they would be permitted to keep racing. I figured that they were being neutralized for yellow line violations. It turns out that the main pack was stopped when they were trailing the four of us by 25 seconds. We rode out and back on the new section for just over 2km and then after we had moved 25 seconds away the officials tried to start the peloton up again without having to ride the extra 2 kilometers. Unfortunately the lead car for the Elite 1&2 riders came through at exactly the same time delaying the Master 1 peloton by an additional 35 seconds.

I did not know any of the details of what was going on with the peloton but concluded that the race was now down to the four of us. I pushed the pace up the hill and dislodged Makurchuk and Petrovski. I kept the pace up and Firek stayed right on my wheel. I kept pushing the pace with over the final two laps.

Back in the peloton my team mates Wieslaw Matuszczak, Tony Abramavicius, Ian and Radek continued to support the break my riding near the front of the peloton. Paolo Dlilecce (Z-team), Mike Shea (Team London), Steve McKee (Nacsword) and Cavanagh all put in efforts to keep the chase alive.

On the final lap I gave a maximum effort on the climb and dislodged Firek and then finished the final 2 kilometers by myself. Firek stayed a minute ahead of the chasers and finished in second place. McKee took a flyer after the final hairpin to soften up the group for his teammate Kevin Davis. Davis attacked on the final riser and held on to take third place. Matuszczak and then Abramavicius bridged up to Davis to claim fourth and fifth place respectively. Stan Blazek (Kuziwinski Coach) led the group sprint to claim 6th place.