Stage two of the Tour de Beauce saw no changes in the overall standings, after the 162 kilometre stage through the environs of Thetford Mines came down to a field sprint won by Martijn Verschoor (Team Type 1), ahead of Shawn Milne (Kenda) and Danny Summerhill (Chipotle).  Dominique Rollin (Team Canada was the top Canadian, in eighth, one spot ahead of Andrew Pinfold (UnitedHealthcare).  Scott Lyttle (Pure Black Racing) continues to hold the Yellow, White and Polka Dot Jerseys. 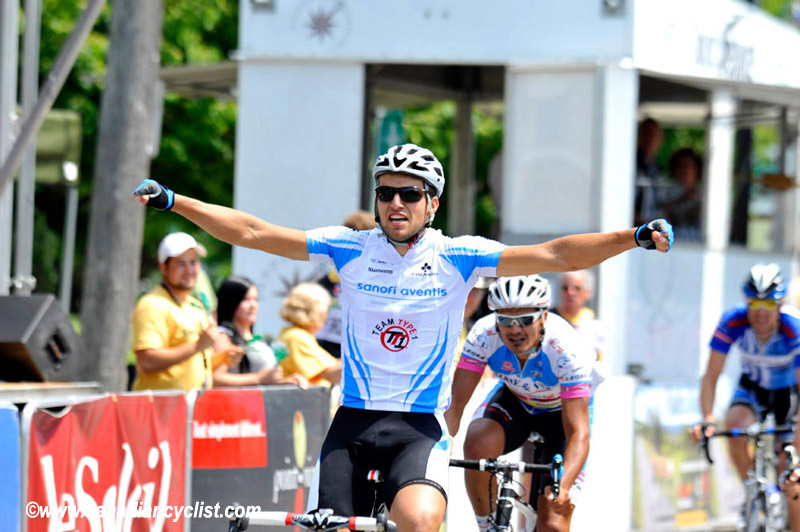 This stage was expected to come down to a sprint - as it did last year - but the obligatory break took a long time to get established.  Riders kept launching off the front of the peloton, but the 60-plus kilometre an hour speed meant they were quickly brought back.  Frank Parisien (SpiderTech) had a scare 25 kilometres into the stage, when hitting a pothole at full speed in the peloton broke both his wheels, but was able to rejoin the bunch after a chase. 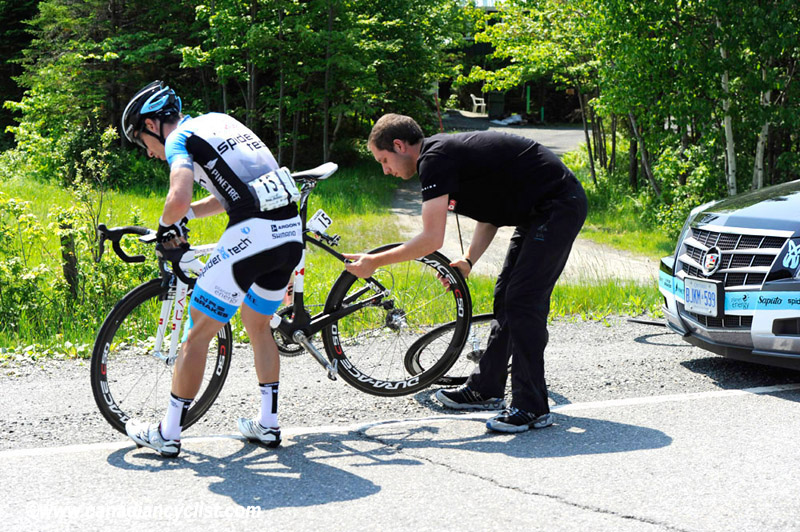 Frank Parisien gets a wheel change

"I was lucky that I didn't crash," commented Parisien.  "I knew as soon as I touched my brakes that there was a problem with the wheels, so I had to stop.  It was a bad time, with the peloton going nearly 70 kilometres per hour."

It wasn't until the 40 kilometre mark that a break finally gained some traction and started to pull away.  Vladisav Borisov (Amore and Vita) and Daniel Dominguez (Fuji-Cyclingtime.com) started the move on a steep climb, and they were soon joined by Christian Meier (UnitedHealthcare), Rob Bush (Chipotle Development), Phillip Mamos (Amore and Vita), Ian Burnett (RealCyclist.com) and Aldo Ino Ilesic (Team Type 1-Sanofi Aventis).  While the gap was still under two minutes, two more riders bridged up:  Matthias Friedmann (Champion System) and Darren Rolfe (Fly V Australia). 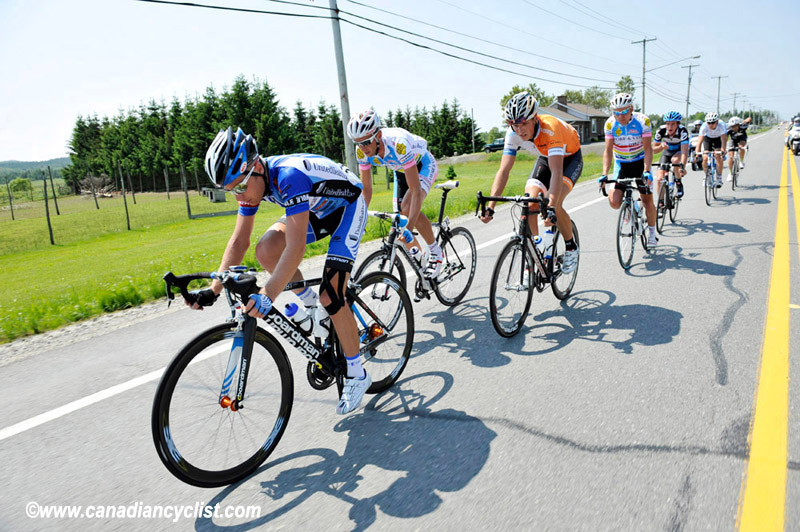 Christian Meier (UnitedHealthcare) at the front of the break

The leaders were all riders that had missed the move on stage one, so they were nearly 23 minutes down, and Pure Black Racing was content to let them go.  The gap began to climb steadily, reaching 4:25 by the 90 kilometre mark.  However, Dominguez, Rolfe and Burnett were dropped in the rolling climbs, and the loss of the Fly V rider spelled doom for the break.

With their chances of victory gone in the break, Fly V went to the front and began pulling it back.  With 32 kilometres to go, the gap was under two minutes, and when the leaders lost Ilesic (along with Friedmann), Team Type 1 started to contribute to the chase as well.

Meier, Borisov and Bush sat up with 20 kilometres to go, when the gap dropped below a minute, but Mamos persevered until caught just as the race was entering the finishing circuit in Thetford Mines at ten kilometres to go.

The bunch rode the three laps steadily, with no team really taking charge until the final lap, when Team type 1 was able to get Verschoor into position to launch in the final straightaway for victory by a bike length.

- Tomorrow is the Mont Megantic stage, finishing with the climb to the Observatory.  This stage is expected to really sort out who the contenders are for the overall title.  While many riders and teams have virtually conceded victory to Francisco Mancebo (Realcyclist.com), Scott Lyttle has been showing good form on the climbs, and shouldn't be counted out.

- Martijn Verschoor is a Type 1 diabetic, and his win is the most prestigious yet by a diabetic rider on the squad