SpiderTech's David Boily came within centimetres of giving the team its second win in two days, in his hometown of Quebec City, no less, but was beaten at the line by Rob Bush (Chipotle),after the pair were away for most of the day in a 16 rider break.  Francisco Mancebo (RealCyclist.com) retained his overall lead, finishing in a small group with his main rivals, 3:44 down on the race winner.

The Quebec City circuit had the potential to upset the standings, if Mancebo's rivals could isolate the Spaniard by launching a series of attacks that his team couldn't cover.  SpiderTech stated pre-race that this was their intention, and they were indeed active throughout the race, with Frank Parisien making multiple attempts to bridge up to the leaders.

However, they were the only team to race aggressively, with the rest content to sit in after the break of riders far down on GC was established 40 kilometres into the stage. 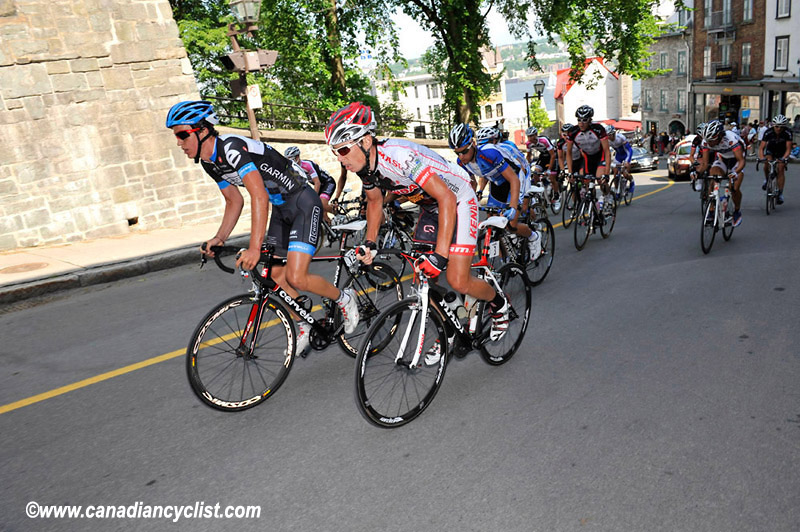 "The break went after the third lap KoM sprint," explained Boily.  "Pure Black put in a really hard effort there [which gained their rider, Scott Lyttle, the Polka Dot jersey].  So I saw the opportunity there with some other riders, and we got a gap pretty quick."

Once it became clear that there was nobody dangerous in the lead group, Mancebo's team was content to let them ride four minutes up the road.  The race stayed like this for the race of the stage, with Parisien, Andrew Randell and Svein Tuft all trying to jump, without success. 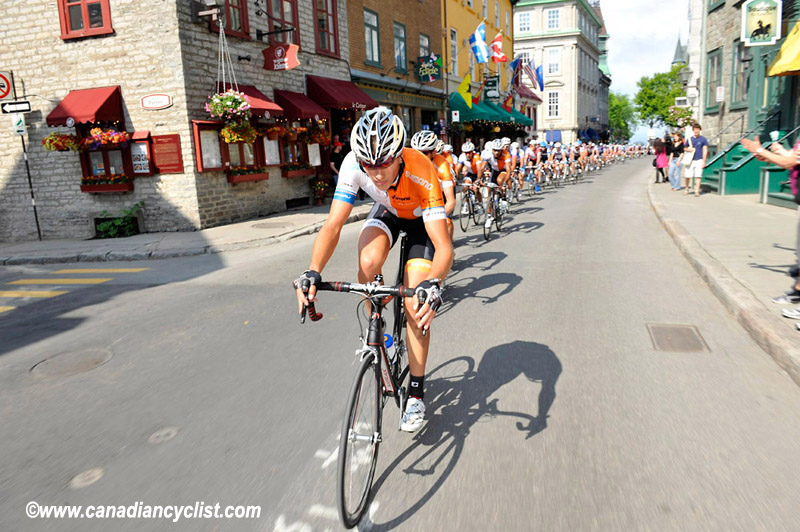 Mancebo's team at the front of the peloton

For Parisien it was frustrating, "We tried to make something happen, but the other teams weren't interested.  We were hoping that they would help us put pressure on Mancebo."

Papillon attacked in the final half lap, but was reeled in just before the base of the climb to the finish.  On the climb, Boily and the other strong climbers upped the tempo, with six riders still in contention in the final 300 metres - Bush, Boily, Sulzberger, Meier, Rytlewski and Papillon.  Bush got the jump on everyone, and Boily got caught up in traffic, with not enough road left to catch Bush by the line. 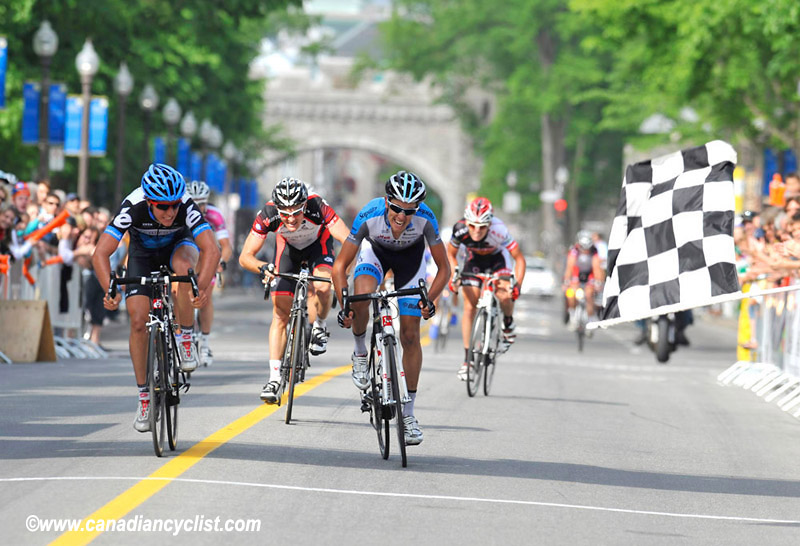 Bush and Boily, close at the line

"I was a little boxed in at the end by another rider," explained Boily, "so I wasn't able to get clear early enough to go for the win.  But this is a great result for me, since I am just back from being injured earlier in the year."

- As mentioned above, Lyttle took the Climbers Jersey (by three points) from Mancebo, who continues to hold the Points Jersey as well as Yellow.  Alex Howes Chipotle) regained the Red Jersey of Best Young Rider from Ben King after a three second bonus for an Intermediate Sprint.  Howes jumped away from the peloton with three laps to go to take the time, and then finished in the chase group with Mancebo, King and the other GC contenders.  Howes is now third in GC, two seconds ahead of his rival King.

- The 26th edition of Beauce concludes tomorrow with the traditional circuit race in and around St-Georges.  This is a very tough circuit of 12.5 kilometres, which the riders complete ten times.  Tuft promises that SpiderTech will once again take the race to Mancebo.  The gap from third to eighth is only 18 seconds, and Tuft is seven seconds off of Howes, so the final standings are by no means secure.