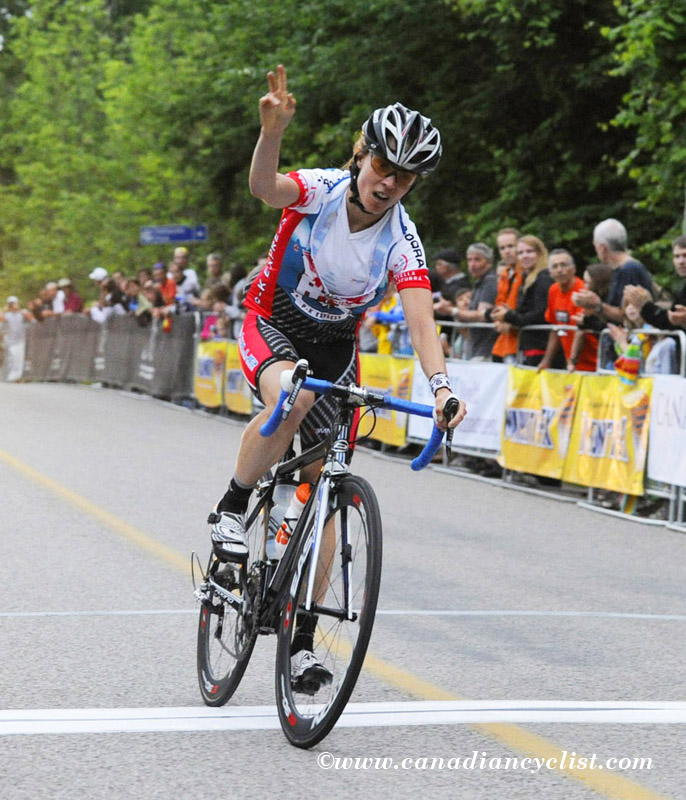 when she became the women's national road cycling champion on Friday at the Immunity-FX Nationals on the selective Rattlesnake Point climb, after breaking clear of an elite group of riders on the final climb of the 103 kilometre race.  Fortin finished with a time of three hours, four minutes and nine seconds.  Lex Albrecht (Juvederm-Specialized) finished 18 seconds behind to take the silver medal, and Erinne Willock (Team TIBCO/To the Top) won the bronze medal, a further two seconds in arrears.  Denise Ramsden (Juvederm-Specialized), was the top U23 rider, in fourth place.

The 12.9 kilometre circuit, on the outskirts of Burlington, Ontario, which the women covered eight times, was dominated by a steep finishing climb up the Niagara Escarpment.  An early break went on the first lap, containing Stephanie Roorda (Cycling BC), Cara Gillis (Missing Link Coaching Systems/Specialized) and Sara Byers (Juvederm-Specialized).

The break didn't last long, with all but Roorda caught before the top of the climb.  However, Albrecht's team mate Moriah MacGregor bridged up, and she and Roorda rode away from the disinterested peloton.  MacGregor dropped Roorda on the next time up the Rattlesnake climb and continued on her own, with the Cycling BC rider eventually reabsorbed by the bunch.

Behind, no one was really willing to take charge of the chase.  team Tibco's Willock went hard up the climb each time, knocking time off of MacGregor's lead and dropping much of the peloton, but then everyone sat up on the descent, allowing riders to chase back on.

This allowed MacGregor to build up a lead of over four minutes by the halfway point.  It wasn't until the last two laps that the time really began to drop, down to one minute as the racers began the last lap.  This was due to some hard work by Albrecht's team mate Sue Palmer-Komar and Tara Whitten of Team Tibco.  MacGregor was finally caught in the last five kilometres.

Fortin, one of the best climbers in the race, upped the tempo on the final climb to the finish line, and when she saw that she had a gap went as hard as she could to the finish line. riding away from the rest of the field to win her first elite national title.

"We were concerned about [MacGregor]," agreed Fortin, "but my team mate Sue Palmer-Komar did a lot of work for me helping to bring her back, and when I got to the climb I was able to make a hard tempo at the bottom.  When it got steep, I saw that there was no one behind, and I went as hard as i could go all the way to the finish  This course suited me, so I knew that I had a good chance here."

Fortin, the reigning provincial champion, had the only goal this season to win this race.

"I really focused on this race. I knew I could do something special, and trained specifically for this course. I am very happy. I don"t think I realize it now. This race was very important for me, and I focussed all my all year for this race. My job [as an anaesthesiologist] does not allow me to do all the races that I would like to do. I planned all my training to be optimal here at the Canadian Road Championships."

"I hired a coach to be able to focus more on cycling. I am able to train, even with my job. What is tough is the racing. This week, I worked 80 hours at the hospital, and didn’t believe I could win. Winning today is simply incredible."

"For me, there is an important proverb. Before conquering the world, you have to be a champion in your own backyard," concluded Fortin.

Pierre Hutsebaut, who is coaching Fortin, as well as david Veilleux (Europcar) and Hugo Houle (SpiderTech), is thrilled with the performance of his athlete.

"She has some very natural physical capacities that I simply polished to attain our objective today, knowing it was possible for her to get the title. She's an athlete who has tremendous potential, at the beginning of what she can do. Last year, she was only racing at the provincial level, and worked hard to get where she is today," said Hutsebaut.

"She works really hard at the hospital, and it was a tough decision for her to dedicate more time to cycling, but it paid off today. She will now touch some international races. She is part of the short-term future of cycling," added Hutsebaut, a former head coach of the Canadian Road Cycling Team.

Note:  We have interviews with MacGregor and all the top finishers here 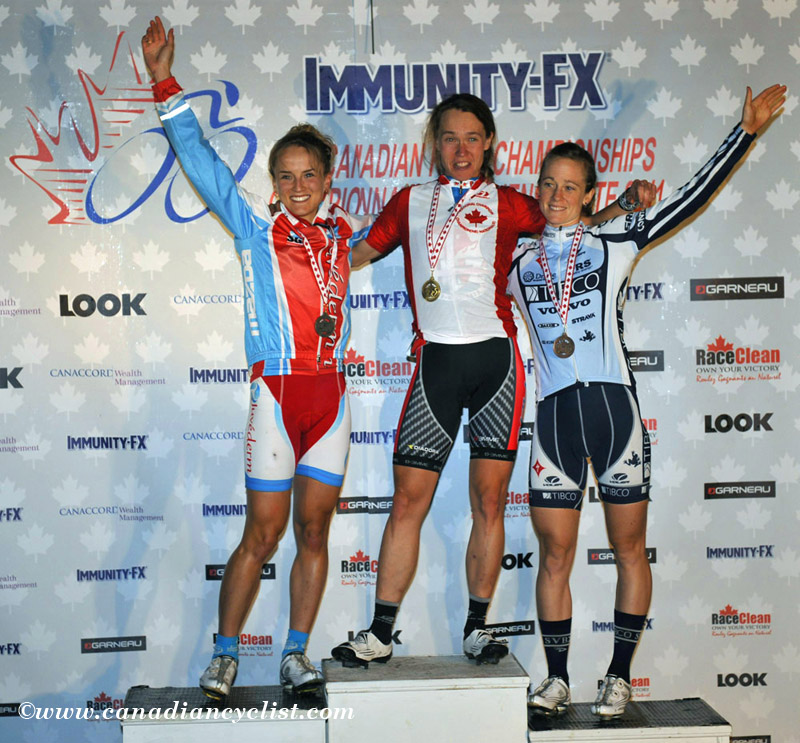