After a week of rain, race day for the cross-country events at the Mont Ste Anne World Cup dawned hot and sunny.  Canada had much to cheer about on this Canada Day weekend, with Catharine Pendrel (Luna) winning the women's race and two other Canadians finishing in the top seven, plus Geoff Kabush (Maxxis-Rocky Mountain) found the form that has been missing earlier in the season to finish seventh in the men's race.

One day after Canada Day celebrations, Catharine Pendrel (Luna) gave Canadian cycling fans another reason to celebrate with her victory at the only Canadian stop of the Mountain Bike World Cup.  World Cup leader Julie Bresset (BH-Suntour-Peisey Vallandry) finished third behind Irina Kalentieva (Topeak Ergon), after crashing while at the front of the race with Pendrel.

Pendrel had a poor start to the five lap, 22.8 kilometre race, and had to chase her way up to the leaders.  But once she caught the front group by the end of the first lap, she and Bresset dropped everyone else on the first climb of lap two.  The two were together until Bresset crashed on the rock garden descent on lap three.

"It was definitely the worst start I've had this year," agreed Pendrel.  "So I had to chase up, but once I got there, Julie and I went on the climb and no one could stay with us.  I was feeling really good today, but Julie was also riding strong.  I heard her crash behind me, and then I was on my own."

Behind the leaders, Kalentieva, Katerina Nash (Luna), local favourite Marie-Helene Premont (Maxxis-Rocky Mountain) and Elisabeth Osl (Ghost Factory) were all within 20 seconds of each other as they battled for the remaining podium spots. 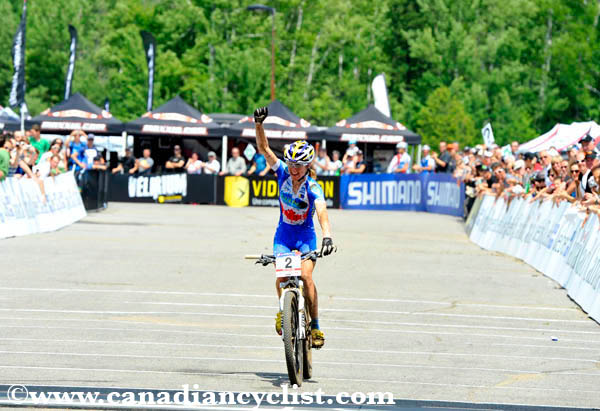 After Bresset's crash, she was slow to get going again, and Kalentieva was able to bridge up to her on the fourth lap.  The Russian then dropped the World Cup leader to move into second, and Bresset briefly lost control of third to Nash when she had to stop into the pit for a rear wheel change, with Premont close to catching her as well.  However, Bresset was able to reel in Nash on the final half lap to hold onto to third, with Nash taking fourth and Premont fifth. 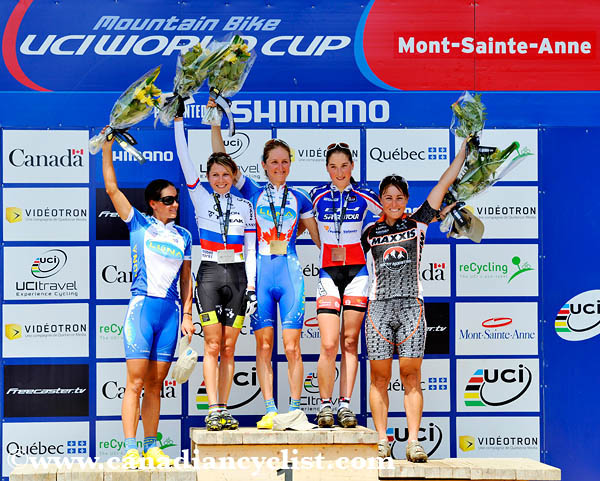 Pendrel remains in second in the overall standings after four rounds, 140 points behind Bresset.  Premont jumped from ninth to third in the standings, at 480 points, tied on points with Lene Byberg (Specialized).

"This was one of my main goals for the season," explained Pendrel.  "I had a poor start, but was able to make my way up to the leaders on the first lap.  Julie [Bresset] and I got a gap on the others, and then when she crashed, I had a clear lead to the finish.  Mont Ste Anne is one of the hardest races in the series, so to win here is very special."

Could she still win the World Cup overall?  "Only if I win all of the remaining races," Pendrel laughed.

- Emily Batty (Subaru-Trek) had the strongest race of her World Cup career, besting the tenth place she had previously recorded in Offenburg, Germany with a seventh place.  In fact, she was only 31 seconds off the podium, and recorded top-three lap times for the last three laps of the race.

- Pauline Ferrand Prevot (Lapierre International) won the Under-23 race earlier in the day, riding away from field on the first lap, and catching half of the Elite field which had started two minutes ahead of her.  She took over the World Cup lead with her win.

- Sabine Spitz (Central Haibike) was one of the women who crashed, landing heavily on her thigh and having to be helped from the course.  The team says nothing is broken, but she will fly straight back to Germany to recover, skipping Windham.

- Video interviews to follow, after we dig our way out of 1000+ images from today...

The fourth round of the men's World Cup cross-country was dominated by Jaroslav Kulhavy (Specialized), who rode away from the rest of the field to win by nearly two minutes.  In the absence of World Cup leader Julien Absalon (Orbea), who had stated that he would not attend Mont Ste Anne or Windham [New York] as he prepared for the world championships, Kulhavy easily resumed the lead in the standings. 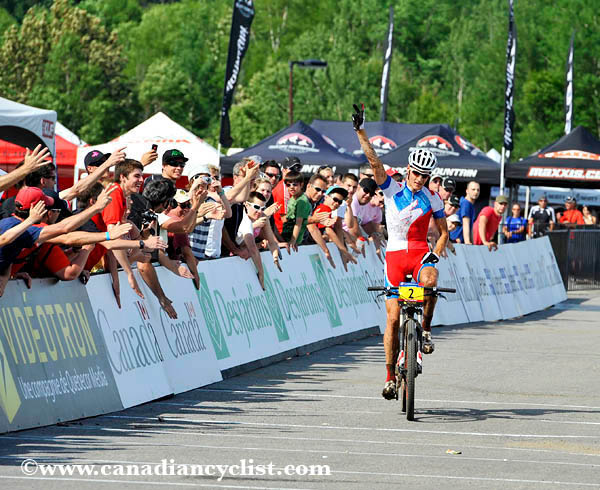 While Kulhavy rode away from the rest of the field on the first lap, behind him it was carnage on the infamous 'Beatrice' rock garden descent, with almost every rider in the top-20 crashing at least once, many suffering mechanical problems, or cuts and bruises as they went tumbling down the rocks.

Hermida, who won the world title here last year, was conserving energy, and attacked very hard with a lap and a half to go, moving into third for the final lap, and almost catching Schurter in second at the line.  Flückiger and Vogel rounded out the top-five.

"I knew that it would be better to be front," explained Kulhavy, "so that I could avoid the traffic that would be a problem at the Beatrice.  So I went hard on the first climb to get in front, and then I could go my own pace.  This is a very hard course, but I like it, and I knew that I could take back the [World Cup] lead here." 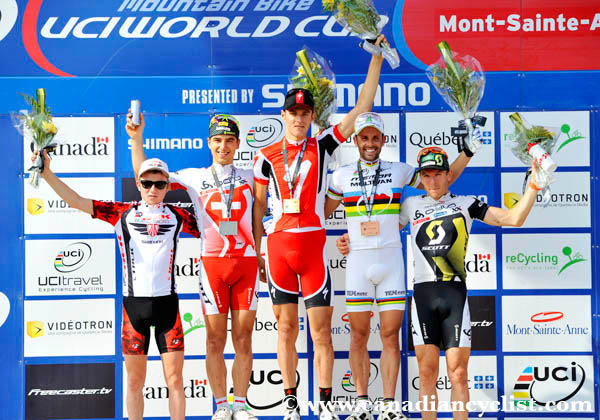 - Kulhavy now leads the men's standings with 860 points, followed by Schurter at 670 and Absalon falls to third with 650 points. 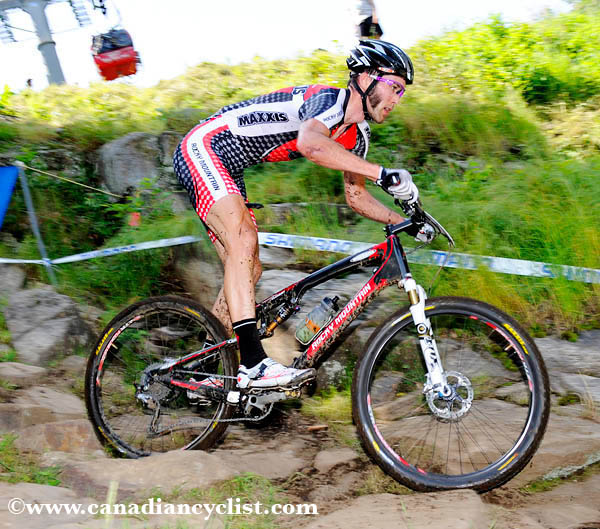 - Geoff Kabush (Maxxis-Rocky Mountain) was the top North American, finishing in seventh after a strong final lap and a half.  Kabush jumped ten spots in the standings, to 25th with 211 points.  "I'm really glad to be back running with the top guys at the front, after a frustrating early season in Europe," commented Kabush.  "I've had a really good month of training in June, and this course suits me well.  I hope this is the start of a strong second half to the season."

- Gerhard Kerschbaumer (TX Active Bianchi) won the Under-23 race earlier in the day, riding away from Fabien Canal (GT Skoda Chamonix) on the third lap.  He took over the World Cup lead with his win.

- Video interviews to follow, after we dig our way out of 1000+ images from today...