Another beautiful, sunny day graced racers as they left Campbell River behind and sailed from Vancouver Island to Powell River with BC Ferries. The beachfront Stage Three Base Camp in Powell River is one of the most picturesque of the week, with the start/finish line arch and racer tents set up mere metres from the ocean’s edge. 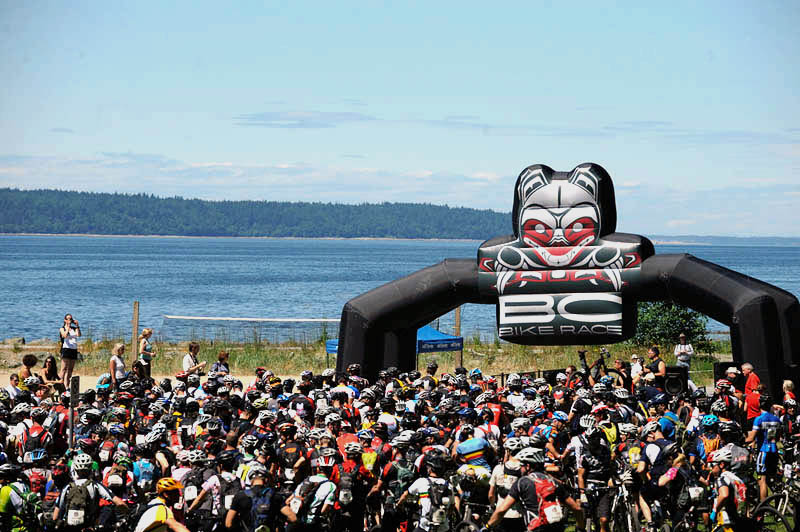 The stage began with an Oceanside lead out winding racers into an extensive trail network that’s meticulously maintained by local riders and includes singletrack affectionately referred to as ‘rolling thunder.’ Trees were the theme of the day, providing swoopy, slaloming trails and undulating rooty sections that lent themselves to strong focus and flow. The reward at the end of the trail was a return to the sun-drenched beachfront finish line where sandy beaches and cool ocean waters beckoned. 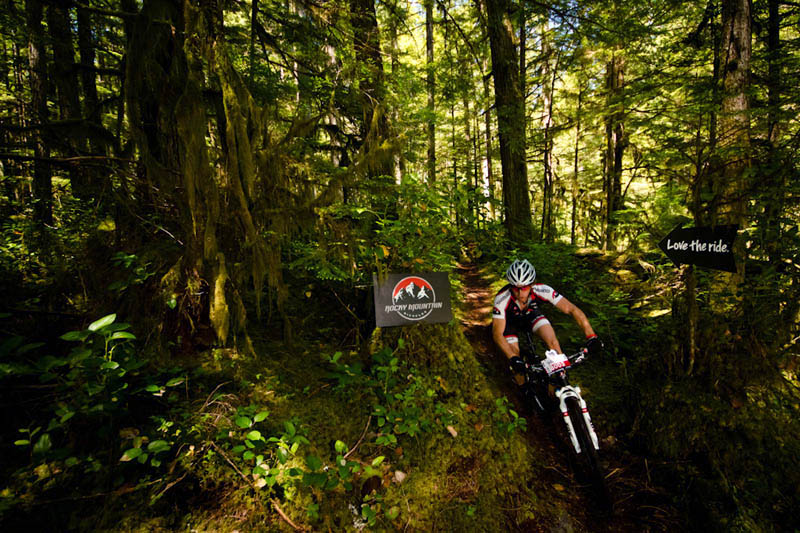 The Kona Factory Team of Kris Sneddon and Barry Wicks won the stage and continue to wear the leaders’ jerseys for the third consecutive day. While the focus often falls on the lead rider, there’s an intense battle shaping up in the Epic Team category. Nativo/Devinci’s Marty Lazarski and Ricky Federau, Clif Bar’s Mitchell Hoke and Brady Kappius, and Rocky Mountain Bikes Colin Kerr and Greg Day are in a fierce battle for the remaining top spots in the GC, with working within a 3 minute spread. This is definitely becoming the race to watch.

One international racer at BC Bike Race is here for more than just an amazing singletrack adventure. North Shore mountain biking legend, Paul Chetwynd, moved to Japan over 20 years ago for a biking career, fell in love with the country and its people and chose to make his life there. Paul was out of the country when the Tsunami struck earlier this year, but the disastrous scene hit hard when he returned two days following. While many people left Japan in anticipation of higher taxes and the cost of recovering from the devastation, Paul and his family opted to stay and do what they can to help rebuild.

That brings Paul to BC Bike Race. He elected to ride the event to create awareness and raise funds to support children who were orphaned as a result of the Tsunami. “At last count, 201 children were orphaned in one five minute wave. They’re going to need a little help for a long time and I want to do what I can,” said Paul. BC Bike Race is supporting Paul in his fundraising efforts and has provided a link on their website for those who wish to contribute www.bcbikerace.com/about-us/charitable-partners

Stage Three wrapped up with an amazing evening dinner and a host of local dignitaries welcoming BC Bike Race participants and staff to Powell River. Most touching was a blessing bestowed upon the group by Tla’Amin (Sliammon) First Nations Elder Honourable Dr Elsie Paul, “This is a prayer that is said whenever someone went on a journey by land or by sea. And I understand that you’ve undertaken quite a journey to be here.” In the Tla’Amin language, Dr Paul connected the room full of BC Bike Race participants and crew together through a warm and sincere prayer for a safe continued journey.

Up next: BC Bike Race’s first point-to-point stage begins at Earl’s Cove ferry terminal. Racers take another scenic BC Ferries ride from Saltery Bay to Earl’s Cove where they will walk off the ferry and straight to their bikes for an 11am race start. Stage Four is the first of two days focused on the Lower Sunshine Coast, which introduce yet a different type of riding to the BC Bike Race story.