After last week's incident with an imbecile truck driver, the caution signs and cones were  carefully located and photographed for the benefit of the city, who issued the permit. The  truck driver had shown up in his car and immediately started hassling the riders who were  warming up. He was reminded that if there was any trouble, we had been instructed to put  in a 911 call to the RCMP and that seemed to shut him up. He did stay for a while but,  when he saw that the organiser was riding shotgun behind the bunch, he finally took off.

As there were only eleven starters for tonight's event, including a welcome visitor from the  Yukon, it was decided to shorten the race to 45 minutes plus five laps. The bunch stayed  together until 8 laps, when Warren Muir shot up on the inside at the last minute to steal the  first prime. He repeated this for the second prime at 18 laps (must have been inspired by  watching Cavendish and Greiple).There were a few abortive attempts to break away, notably  by Rob Russell but, after letting him sit in the wind for a while, the group had no trouble in  hauling him in. Prime 3 at 23 laps was taken easily by Mike Sevcov who seems to choose  this sprint every week to show his mettle. Then the bunch regrouped and at the final prime,  Warren Muir again showed his top end speed. With two laps to go, Rob Russell again took  off and established a ten second lead but he had no fuel left in the tank and he was again  absorbed just prior to the bell lap.

At the finish, Muir again showed his superiority with Lionel Space, who had remained almost  invisible for most of the race, coming in second. And Ian Smith rounding out the top trio.

Thanks to Iain Hay for course set up and take down, and to Kit McCaffery for registration and  officiating (her first commissairing assignment in over five years).

MIVA Sunday Criteriums
MIVA is pleased to announce the inclusion of two Sunday criteriums on the popular Nanaimo Boxwood circuit. Dates as follows: July 31st., August 21st. Both events will consist of 3 ability-based categories plus a women's event if numbers warrant it. BCMCA members who enter will be given points according to their relative finishing positions. Registration opens at 12pm and first event starts at 1pm.

Wednesday is the regular Cedar Training Race organised by Nanaimo Road Club. Start is at 6.30pm at North Cedar Intermediate School on Gould Road. Make sure you have UCI licence or Cycling BC Citizens' permit. 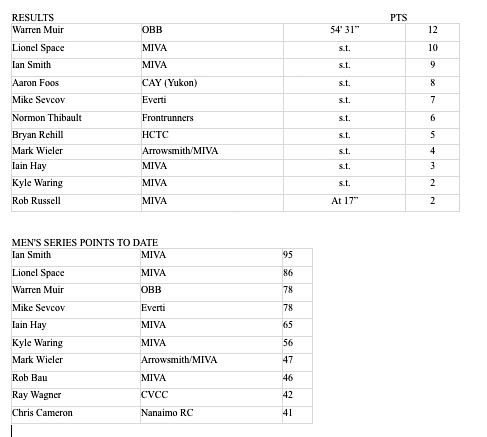