It took a photo finish review, but Cameron MacKinnon threw his bike to narrowly edged out Bailey McKnight of at the line to win the $15,000 2011 Giro di Burnaby on Thursday, capping a great night for the local teams at BC Superweek. 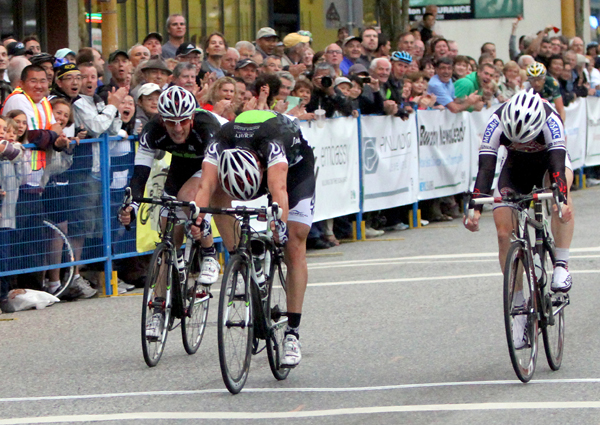 Justin Kerr, MacKinnon’s teammate on locally based H&R BLOCK, finished third in the mad dash to the finish line, less than a tenth of a second ahead of a group led by Ryan Anderson of Steve Bauer’s SpiderTech squad and an impressive international of top professionals like USA criterium  champ Daniel Holloway, former Canadian road race champion Will Routley, one-time track champions from Denmark (Michael Smith Larsen), and Australia (Tommy Nankervis).

That MacKinnon won the final sprint shouldn’t be that shocking. The 26-year-old Calgary native has gold and silver medals at the Pan-American Championships on the track in 2007, and has a couple of national titles as well. The challenge in his first year of competitive road racing has been setting up for that finish.
“A sprint finish is kind of home territory but the process of getting to that finish is brand new,” said MacKinnon, “And a lot of hard work so the boys on my team have really helped me a lot and helped me develop on the road this season.”

MacKinnon completed 30 laps around the 1.85-kilometer loop of North Burnaby in one hour, 12 minutes and 51.80 seconds, with a crowd of 4,000 cheering the sprint finish after the Ferrari pace car pulled ahead down the last straightaway.

McKnight, who lost by a wheel’s width, rides for the local amateur Trek Red Truck amateur team, which also produced the winner and third place finisher in the 20-lap women’s race. Julia Garnet won by almost a minute ahead of Jenny Lehman of the Local Ride Racing team, with Trek Red Truck’s Karlee Gendron winning a pack sprint more than two minutes later to claim third place.
“This is huge, probably the biggest event I have been to this year,” McKnight said of the 2001 Giro di Burnaby, which returned to the BC Superweek calendar after two years off. “It’s very well organized, the crowd was nuts, and to be able to roll the breakaway like that with the guys we’ve had, it was just awesome.”

The six-rider break built its lead as high as 25 seconds. But in the final four laps it slipped to 18, to 13, to 12, all the way down to eight seconds for the final time around the closed street circuit. For a while down the back straightaway it looked like they’d got caught, but they managed to stay ahead – by one second.

“It’s tough not to worry when you see the gap coming down and with the boys on the break sprinting for primes it got a little unsteady,” said MacKinnon. “I just wanted to keep it rolling smooth and try to conserve and carry it to the finish.”

McKnight, also from Calgary, wasn’t far behind, a feat that’s more impressive given he is coming back from breaking a clavicle and collapsing a lung back in April. It’s McKnight’s third year on the road, his first on Trek Red Truck.

The 21-year-old knows how important BC Superweek is to a local team that has graduated riders like Svein Tuft, Routley, Anderson, Marsh Cooper (Kelly Benefit Strategies_OptumHealth) and Nic Hamilton (Jelly Belly presented by Kenda) to top North American teams – and Europe -- over the past decade plus.

“It’s huge,” McKnight said. “We’re definitely looking for a big result his week and looking for a win, but photo finish with a millimeter of a tire length at the line is pretty close and to have our name on the podium at BC Superweek is great.”

Trek Red Truck has been a fixture on the women’s stage so far, winning four of the first five events and the overall title at the Tour de Delta as well.

On Thursday night, it was Garnet’s turn to shine.

The 19-year-old Saskatoon native won the 20-lap women’s race by nearly a full minute, jumping into a two-rider break four laps in and pulling away with four laps to go. Garnet, who won the 2009 and 2010 Canadian National Junior Time Trial championships, finished the 37-kilometer race in 54 minutes, 50.6 seconds. 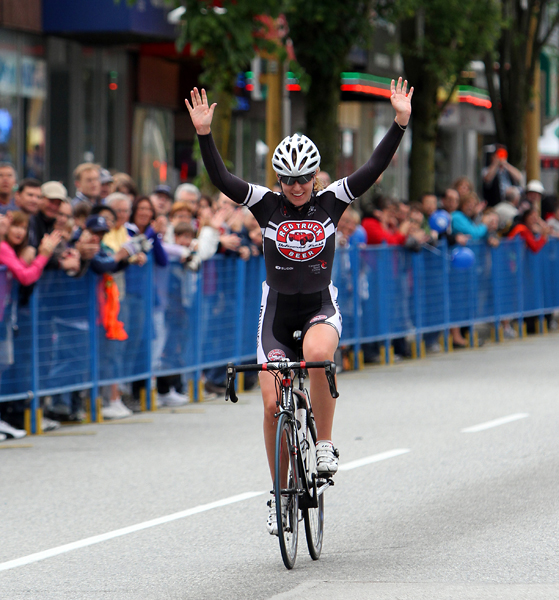 Jenny Lehman, who led the attack, finished alone in second place just over 44 seconds behind for the Local Ride Racing/Dr. Vie Superfoods+ team.

“That wasn’t the game plan for me to get away, it was just cover moves and keep on Local Ride,” Garnet said. “(Lehman) went first after a good attack from one of her teammates and then she went through to counter and I just followed on her wheel. We worked pretty well together for probably a good 10 laps, trading off.”

Then Garnet took off, turning the final four laps into one of those time trials she is so comfortable in, following the bright red Ferrari all the way to the finish line.

“It’s a great car to chase around – I’ve never seen a Ferrari lead a race before,” said Garnet, a 19-year-old in her fourth year of cycling, and first on the Trek Red Truck team. “I just didn’t want to finish in a sprint because I wasn’t sure how I was sprinting and I thought she could out-sprint me so I attacked her.”

It caught Lehman, a 23-year-old from Kamloops, off guard.

“I’m pretty new to this, definitely a lack of experience played a part,” Lehman, in just her second year of racing, said. “It was hard for me because I am not the best time trial rider and that’s’ what it is riding out there on your own, so I was hoping it would be left later and out sprint her or attack her over and over again. She just got the best of me at the end I was dying a thousand deaths.”

Gendron won a sprint for third place, adding to her third place finish at the UBC Grand Prix on Tuesday, and a pair of criterium wins – and the overall title – at the Tour de Delta last weekend. Gendron -- and the rest of the pack -- was more than two minutes behind Garnet, her teammate on Trek Red Truck, which has won all but one of the first five events at BC Superweek.

“It’s huge for our team,” said Garnet. “To win as a home team feels real good.”

BC Superweek continues with the 32nd annual Tour de White Rock, a three-stage race that starts Friday night and continues through Sunday morning.