Tuesday night's race saw 14 riders start. After the two neutral laps, the group  stayed together until lap eight, when Iain Hay, Warren Muir and Ron  Hewitson rolled off the front. Within a lap, they were joined by Lionel  Space and Kirby Villeneuve but the break was hauled in by a fast moving  bunch. Immediately, Muir broke again, this time taking Rob Russell with  him but the duo was soon caught and at the bell for the first prime, the bunch  was all together again. The prime was taken by Muir, with Space and Russell  in hot pursuit.

This trio stayed at the front for another lap and then Ian Smith tried to get away,  followed by Space and Russell. Within a lap, Lionel and Rob eased off the pace  but Rob was then joined by Mike Sevcov and the pair took ten seconds out of  the rest of the pack. This move looked dangerous with two strong riders off the  front and several riders attempted to bridge, with Muir, Sevcov and Smith getting  across the gap. This proved to be the vital move and the quintette steadily pulled  away from the main group.

The evening was very warm and humid and this resulted in three riders abandoning  in quick succession. The remainder of the chasers gradually split apart and were  lapped by the hard-working break with only Iain Hay managing to latch on to the  leaders and Rob Bau, a further lap down able to draft until the finish.  Thanks to Iain and Brodie Hay for course set up and take down, to Kit McCaffery  for registration, prime recording and to Mrs. Hay for lap board. 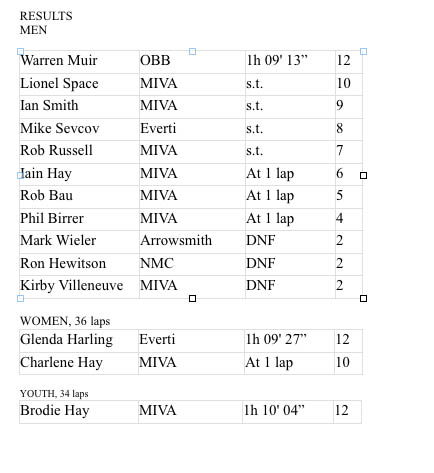