Straight from the Windham World Cup, I headed west to Monterey, California, for the Specialized 2012 press launch.  Fittingly, Specialized had just finished 1-3-4-11 in the men's cross-country, and had taken their first stage victory of the Tour de France with HTC-Highroad's stage 5 win by Mark Cavendish.

Specialized, like most bike companies, refines their bikes every season, but certain years offer a more significant revision to either the mountain or road line.  Last year it was Mountain, with the 29er Epic the highlight, but this year it is Road, with the introduction of the Tarmac SL4 and the Venge.

I had a chance to test out the SL4 in a three-plus hour ride along the Pacific coast (this is one of the better aspects of my job), and took the Venge out for a shorter ride for comparison.  We will be doing a long-term test on the SL4 through the fall, but here are some initial impressions. 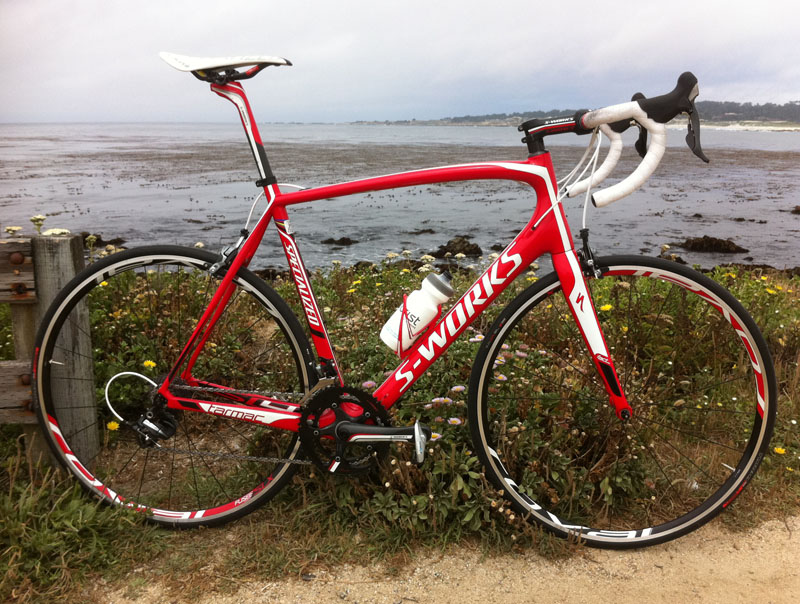 The Tarmac has, up until the introduction of the Venge, been the full-on, hard core race bike for Specialized.  Compared to the Roubaix, it was a stiffer, harsher ride, with faster steering, stiffness and lighter weight as the pluses.  Both the Tarmac and Roubaix have been used to win races at the highest level but, for me, the Roubaix was the bike I would prefer for all day riding, and last year the Roubaix received a big upgrade with the SL3 version, which quickly became my favourite bike to ride.

So, when Specialized said that the new Tarmac SL4 was the bike I would be riding in California, I was predisposed for a less than favourable comparison.  The engineers and marketing department at Specialized have both been touting the increased stiffness of the SL4 over the SL3 (a claimed 19%), which just made me more concerned about being bounced about on the cracks that abound on the oceanside roads.

But a funny thing happened on my ride (which was out into a headwind, back with a tailwind):  I didn't get beaten up, and I was noticably less fatigued and faster on the climbs - which are short, steep ones as the road weaves along the coast.

The Tarmac has a long cockpit, which stretches the rider out into a more efficient position.  Despite that, I felt completely comfortable and well fitted to the bike.  The ride, while certainly harsher than the Roubaix (which is fitted with shocking absorbing inserts in the fork and stays), was not unduly so.  Steering was noticably crisper than the Roubaix (which is no slouch, by any means).

But it was in climbing that the Tarmac really shone.  This bike literally scooted up the climbs, both in seated and standing positions.  The one fault that I have had with the Roubaix has been when climbing out of the saddle; it can feel unbalanced in the front end to my perspective.  That is not the case with the Tarmac SL4; it encouraged me to attack the climbs, and I would hit them in at least one bigger gear than I normally would.

Keep in mind that this is one ride on (relatively) unfamiliar roads, so it will be interesting to see if I still feel that way once I get some kilometres in on my regular routes, and can decide whether the Tarmac replaces the Roubaix in my affections. 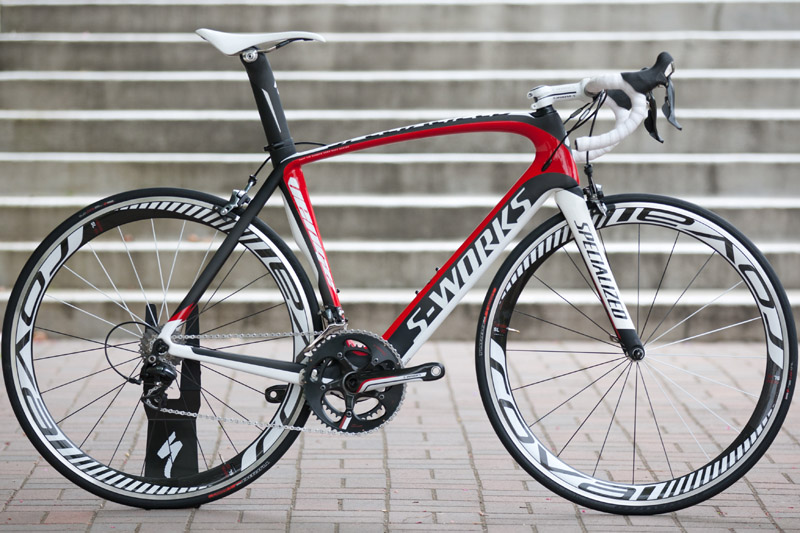 Now the Venge.  This is a brute of a bike.  You could almost say it was specifically designed for the pros like Cavendish (particularly the MacLaren version).  It is a tighter, almost cramped cockpit, with even faster steering and acceleration.  As such, it is a demanding ride, and one that most riders will likely feel requires too much attention.  While it is tremendous fun to ride, it is not a bike that I would enjoy on a daily basis.

Canadian pricing is not fully decided, but we were told that you can expect to see the Tarmac SL4 carry a 5% - 10% premium over the SL3, and it will be available in store by mid-September.  The Venge will appear in stores over the next few weeks, with pricing $8,800 to $9,200 (depending on compnent group).  This pricing is for the non-McLaren models - the McLaren that Cavendish rides is five figures (and pretty much sold out...). 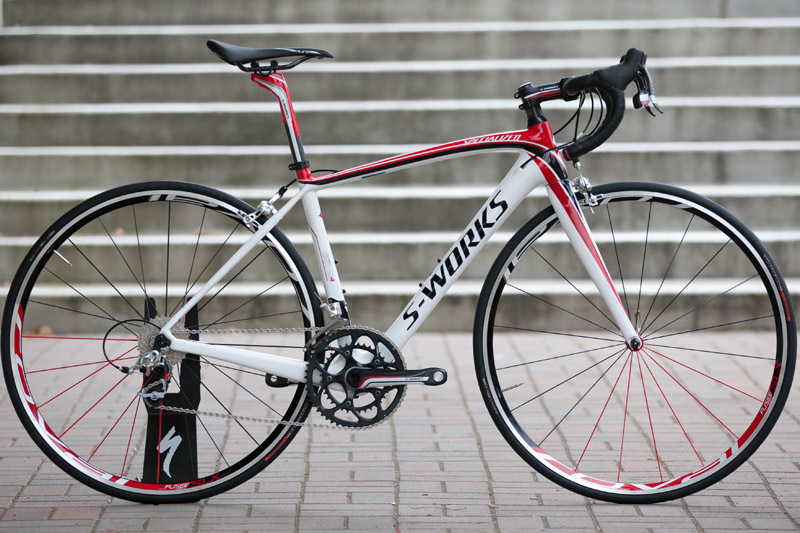 For the women's market, Specialized has introduced the Amira - a full-on race bike that uses the same materials and technology as the Tarmac SL4.  This bike has been raced successfully by the HTC-Highroad women's squad, and the TIBCO/To the Top team that includes Canadians Erinne Willock, Tara Whitten and Joelle Numainville.  Our only beef is that Specialized cuts their women's models off at 56 cm, meaning taller women are still forced to use men's models.  To be completely fair, Specialized is no different than other bike companies in this regard - when will the bike industry realize that there are lots of women who need a 57 or 58 cm frame?

While the focus in Monterey was on the Tarmac SL4 and the Venge, there were a host of other new introductions that caught my eye, and that you will be seeing at your local dealer over the next few months.

Four interesting items here - the proliferation of 29ers through the entire Specialized line (both men's and women's models); the Autosag suspension adjustment system on the Stumpjumper; the mid-priced Carve 29er series; and the Fate women's bike.  Note that at this point we have not tested any of these models. 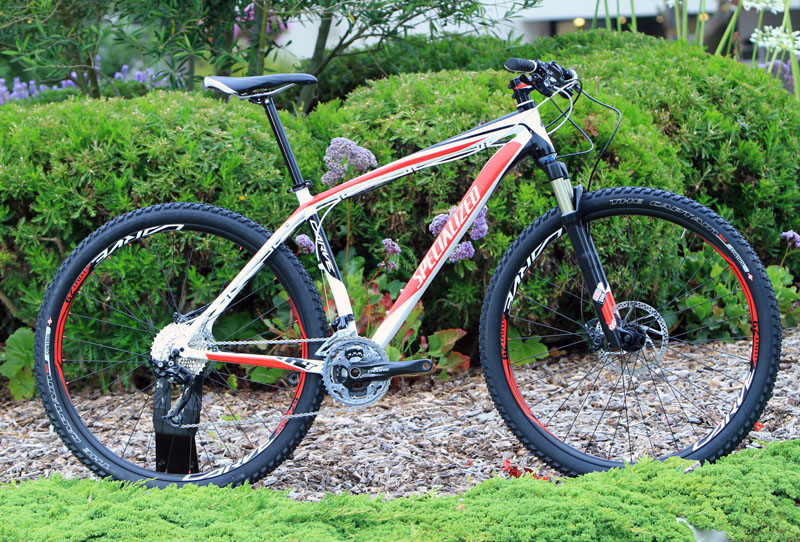 The Stumpjumper is Specialized's most storied line, although it has been overshadowed recently by the Epic.  It has developed into the high end, all mountain-cross country series, for riders who want something more robust and versatile than the race-focussed Epic.  There are both hardtail and suspension (Stumpjumper FSR) versions, and Autosag is, of course, on the FSR model.

Getting the suspension setting right is always a hassle, so Specialized worked with Fox to come up with a valve system that enables the rider to quickly and easily adjust the rear suspension pressure to a level appropriate for their weight.  Now, the purists will say that this is not the same as fine tuning suspension sag by an expert; and they are correct.  However, how often do you have a suspension expert on hand at the start of a ride?  For most of us, Autosag offers a reliable and simple way to get your suspension adjusted correctly. 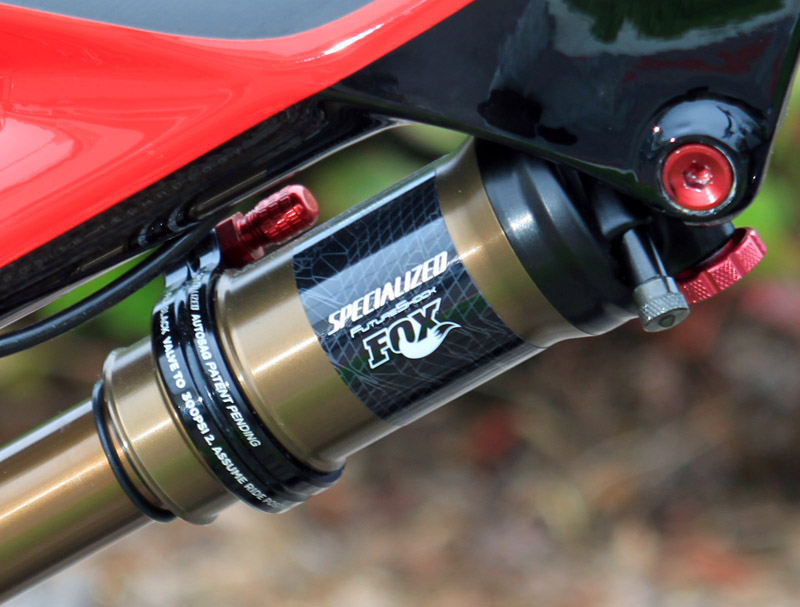 The system is simple - pump the shock up to about 50 PSI over rider weight, sit on the bike and press the release valve, which bleeds air out until it automatically stops at the correct setting.  So far, it is only for the rear shock on the Stumpjumper FSR line, however, we are sure to see this extend to other models and, possibly, to forks.  Specialized would only say 'not at this time', when asked if it was coming for forks...

Another cool little item on the Stumpjumper is the Dangler chain retention system, which snaps over the chainstay and stops chain slap.  Very simple and effective.  Right now it is only designed for the Stumpjumper chainstay shape, but it is sure to appear on other models (and hopefully as an aftermarket item).

The Carve is a new mid-priced, raceable 29er hardtail, available in two models.  It fits between the Rockhopper and the Stumpjumper lines, and comes with an aluminium frame and an expected sub-$2000 price tag.  It is fitted with an 80mm travel fork and hydraulic disc brakes, and the spec makes this a strong value for an entry level race bike, or for the rider looking for a lightweight and affordable all-round bike.

The Fate was introduced to the cycling world in late May, when racer Lene Byberg raced it at the Offenburg World Cup.  The Fate brings pro-level quality to a women's 29er race bike; a first.  The full carbon frame use the same technology as the World Cup Stumpjumper hardtails ridden by the Specialized men's squad, however, the geometry, front suspension and componentry are all designed and sized for women.  There are two models - Expert with SRAM XO and the Comp with SRAM X9.  In a side note:  the Myka full suspension women's bike has also received considerable upgrades for 2012.

As always, Specialized had lots of refinements and new goodies in their non-bike stuff.  Below are a few of the items that caught my eye:

Shoe retention system - Specialized has been using the BOA system for a few years now - a thread that is tightened by twisting a dial.  It offers even tension and pressure, and is easy to adjust on the fly.  What is new is that there are two dials on the S-Works road and mountain bike models for the upper and lower portion of the foot, so you can really get the optimal amount of pressure.  I've been using it for a couple of weeks now, and it really works.  Also, Specialized has changed the release mechanism - the old system required pressing a button to get it to release, and it didn't work so well at times.  The newer version is much simpler - twist one way to tighten and the other to loosen. 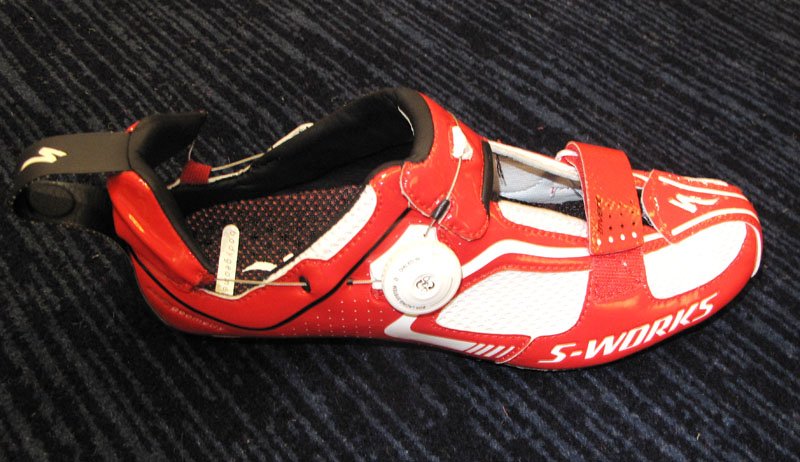 Wiretap gloves - Anyone who uses an iPhone has likely had this happen while riding in full finger gloves:  a call or text comes in, and you are making a spectacle of yourself trying to swipe the unlock button with your nose, because the touchscreen requires physical contact (in the winter, this can get really gross...).  Wiretap puts a thin contact on the tip of the thumb and forefinger of the glove, which allows you to access the phone features while wearing your gloves - it works!  Available in both a lightweight summer glove and a cold weather model. 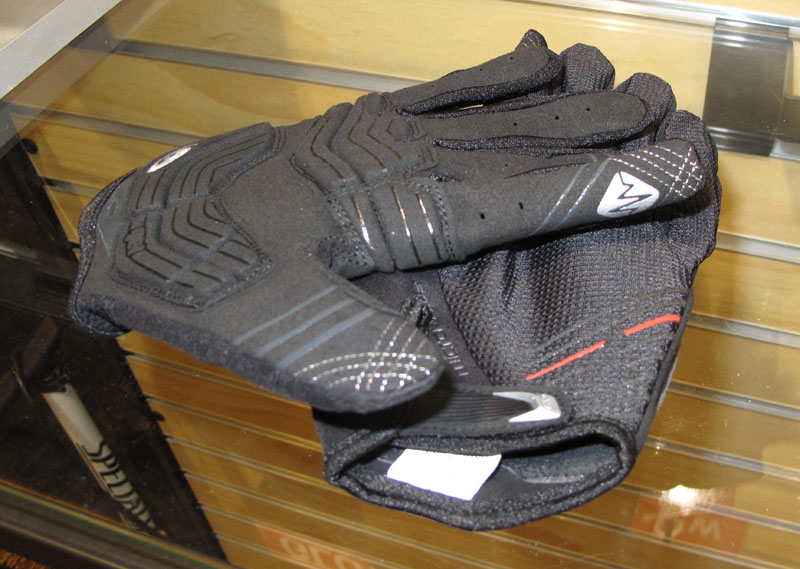 74 Shoe - This is for nostalgia buffs.  Specialized has brought out a shoe and glove combo that harkens back to the days of the all leather Detto shoes and leather gloves.  However, these versions make full use of current technology, with a carbon sole and the BOA retention system for the shoes, and proper padding in the gloves. 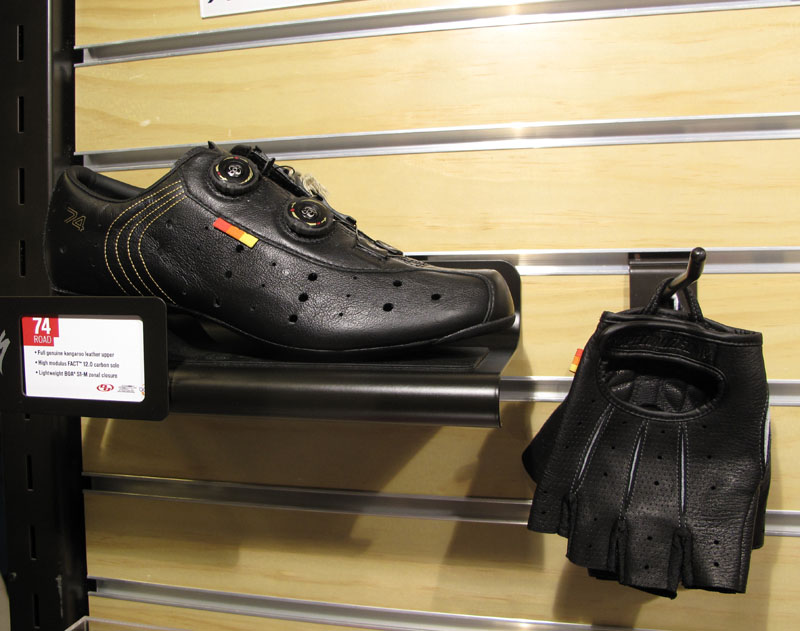 Dissident helmet - Specialized will be the first to admit that their previous full-face helmet was not particularly well-received.  So, they went back to the drawing board, and brought in Bob Lakes, one of the top motocross helmet designers to produce the Dissident.  Made out of a carbon-kevlar-fibreglass weave, the Dissident hits the 1000g weight mark.  It has been designed so that it can be removed in the case of a crash without disturbing the rider's neck position, using an airbag system.  A new ventilation system has also been designed.  Look for a review to follow. 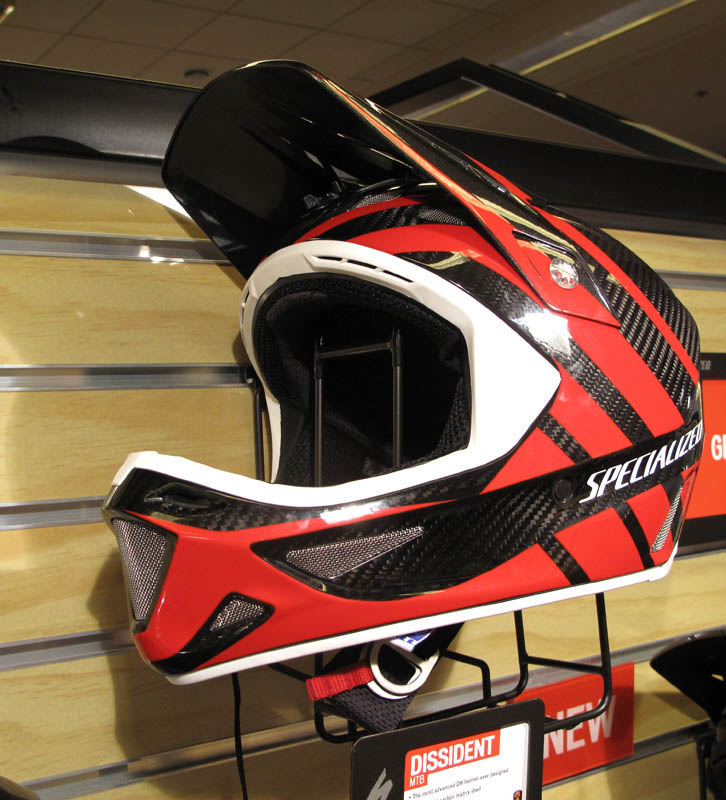