MIVA Tuesday Criterium on the Boxwood Circuit, in Nanaimo on August 9th

A good race to watch last evening. Immediately after the second neutral lap, Warren Muir and Rob Russell snuck off the front of the pack and steadily gained twelve seconds per lap while the pack watched them pull away.

By lap twelve, the duo had a lead of forty seconds and worked steadily to increase this to over a minute by lap twenty-eight. In the bunch, Mike Sevcov was trying to organise a chase but those who wanted to work were interspersed with others who were just along for the ride and the gap to the break continued to increase.

As the bell rang for the final sprint to the line, Kamstra was still about a hundred metres off the front but during the final lap, Muir towed the pack up to the Whistler rider and overtook him just before the line. However, Kamstra jumped again and just edged Warren to take the chequered flag and third place overall. Muir and Russell being a lap up on the rest of the group, took first and second.

Thanks to Kit McCaffery for registration and bell, to Sharon Hay, lap board, and to Iain Hay and Rob Russell for course set up and take down.

Results and Remainder of 2011 schedule below 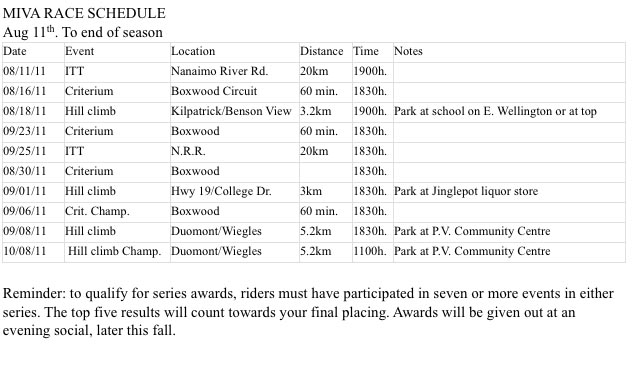