The Canadian U23 Team is taking part in the Tour de la Province de Namur from Saturday, August 6th to August 10th. The race on the Belgian National schedule takes place over five days. Stages range from a distance of 135 to 160 km, with more than 150 riders from 28 teams, including the U.S. national team as well as Luxembourg.

This race is part of a preparation program offered to certain U23s who are eligible for selection on the Canadian team for the upcoming UCI Road World Championships.

Here are the five riders on the Canadian team: 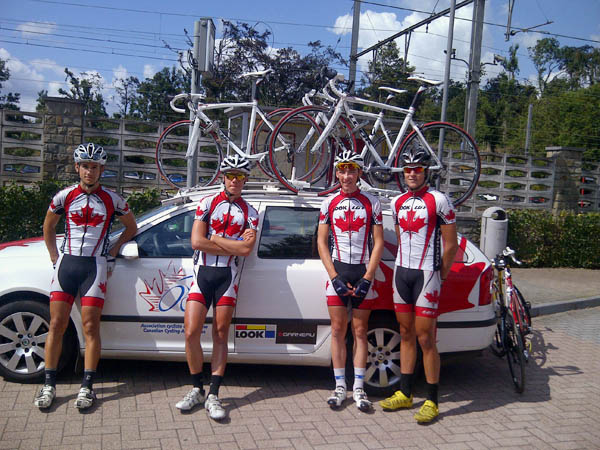 The first stage took place over a distance of 153 km between Namur and Ciney. From kilometre 20, Pierrick Naud was part of a breakaway that lasted over 80 km. Garrett McLeod arrived only two days before the tour with a difficult trip overseas, and could not keep up a very high pace. Unfortunately for him, having found himself alone behind the caravan, he lost his way and was eliminated from the race. After the break was caught, Pierrick had gastrointestinal problems and was not only able to stay in touch with the pack. Stuart Wight, and Jamie Riggs, Spencer Smitheman finished in the main bunch.

The second stage took riders from Philippeville to Florennes over a distance of 160 km. Jamie Riggs distinguished himself on this stage,which was swept by strong winds and a hilly course. Riggs was in the first group going for the King of the Mountain title. He then found himself in a chasing group of nine riders, going after a group of 15 riders. With about 10 km to go, Jamie was not able to follow the group and finished with the pack. Stuart Wight has managed to slip in with a few chasing riders with a few kilometres to go to, and finished 44th at 1:19 behind the winner.

The third stage of 134 km was between Bievre and Gedinne in the beautiful Ardennes region. No less than five King of the Mountain climbs, including three Category 1 climbs, were to be tackled by the group. The Canadians were patient, and the objective today was to be well positioned for the King of the Mountain. The temperature was very difficult today, at 15 degrees and with storms throughout the day.

The peloton was traveling at high speed to catch the break with about 5 km left in the race and Stuart Wight had managed to stay with the main peloton. Unfortunately, Jamie Riggs suffered a puncture 5 km from the finish, and ended his race one minute behind. Pierrick Naud, who also suffered a puncture, and Spencer Smitheman finish in a group more than 10 minutes behind the winner's time.

After the Tour de Namur, some U23 will head over to London for the test event of the 2012 Olympic Games, on the Olympic course. This is an opportunity for them to ride alongside some of Canada's best, including Christian Meier, David Veilleux and Dominique Rollin. The U23's will then start in three races on French soil: the GP Beuvry La Forêt on August 20th, the GP Bavay of August 21st; both events on the French national calendar. After, Canadians will participate in the GP Marbriers, UCI 1.2, on August 23rd, a race won by Keven Lacombe in 2010. Antoine Duchesne will join the other five Canadians for the three races.

Finally, the final selection of the Canadian team will race at the final round of the U23 Nations Cup, held August 24th, and Tour de l'Avenir (September 4th to 11th). The athletes competing at the UCI Road World Championships in Copenhagen will be selected September 12th.