The 2011 UCI Mountain Bike World Cup presented by Shimano concludes this weekend in Val di Sole, Italy, with all three disciplines coming together for the final round.  While a number of titles have already been mathematically won, there will still be intense competition for individual victory in this final lead up to the world championships in ten days time.  Val di Sole has attracted more than 900 participants from 43 nations, making it the best attended World Cup in history. 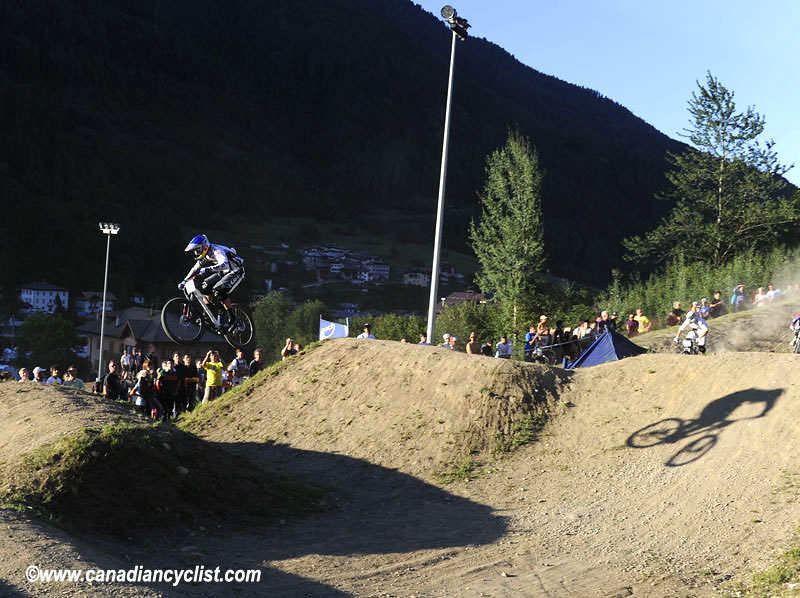 The 4X course requires a lot of pedalling, with a first corner that is critical for a good run

Jared Graves (Yeti-Fox Shox) wrapped up the men's title in round four, in Mont Ste Anne, Canada, however, there is still a three-way battle for second place in the overall standings between Swiss riders Roger Rinderknecht and David Graf, plus former world champion Michal Prokop from the Czech Republic, all of whom are separated by 50 points.  There are at least five other riders also in contention for a top-five in the final overall standings, depending on the outcome here in Val di Sole, so expect some very aggressive racing. 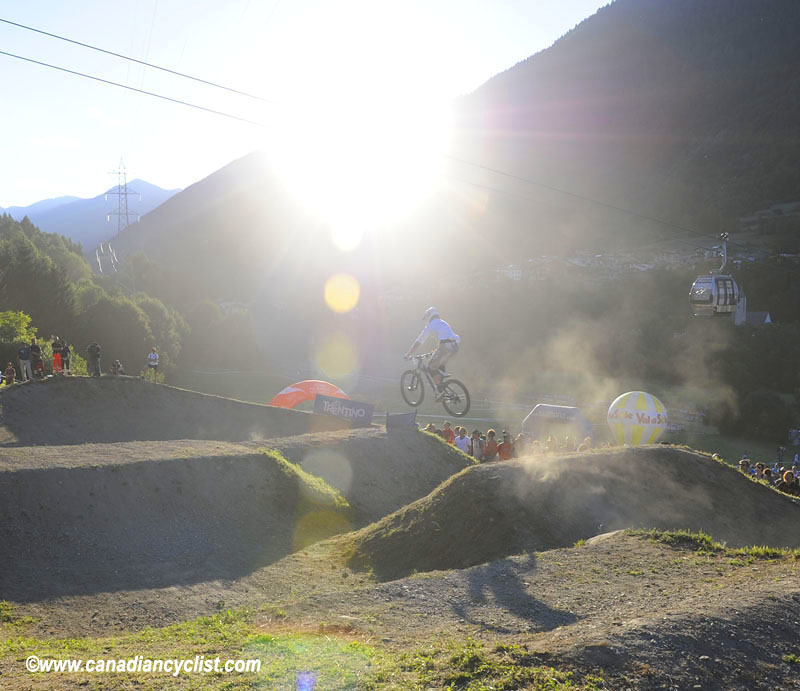 It is called the Valley of the Sun for a reason

In the women's series, Anneke Beerten (Milka Trek) has successfully defended her World Cup title, with an insurmountable lead of 160 points over second place Melissa Buhl of the United States.  Buhl could still be bumped out of second by Switzerland's Lucia Oetjen or Celine Gros (Team Morzine-Avoriaz/Haute-Savoie), and there are a total of seven riders who could still make the final podium for the overall standings. 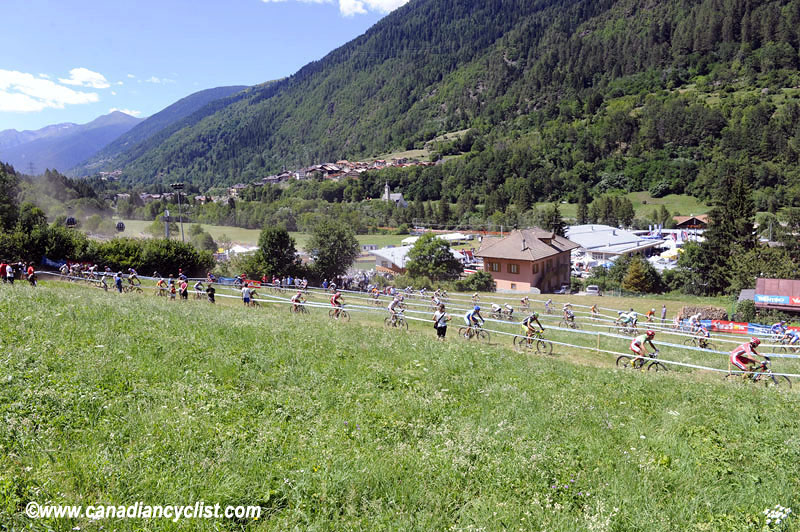 Last weekend, at round six in Nove Mesto na Morave, Czech Republic, the defending World Cup champion, Catharine Pendrel (Luna) cut into the points lead of World Cup leader Julie Bresset (BH-Suntour-Peisey Vallandry) by taking her second victory of the season.  Bresset still leads Pendrel by a significant 140 point margin, but this battle is not over, and a bad day for Bresset could see an upset in the final round.  Behind the two leaders there is a cluster of riders who are fighting for the three remaining top-five spots in the standings.  Irina Kalentieva (Topeak Ergon) and Marie-Helene Premont (Maxxis-Rocky Mountain) are separated by ten points only in the battle for third, with four riders having a real potential to take the fifth and final spot on the podium. 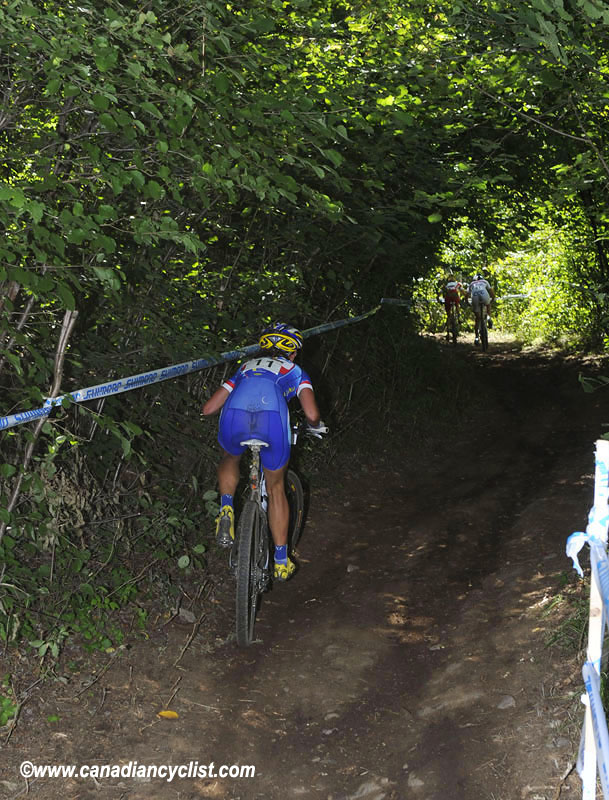 Jaroslav Kulhavy (Specialized) became the men's cross-country World Cup champion last week after taking his fourth win of the season before a very enthusiastic home crowd, while Nino Scurter (Scott-Swisspower) also wrapped up second place in the final standings.  The battle for third, fourth and fifth is much tighter, with Julien Absalon (Orbea) facing competition from Maxime Marotte (BH-Suntour-Peisey Vallandry), world champion Jose Hermida (Multivan Merida) and Burry Stander (Specialized) for third.  In total, there are seven riders vying for the final three spots in the overall standings. 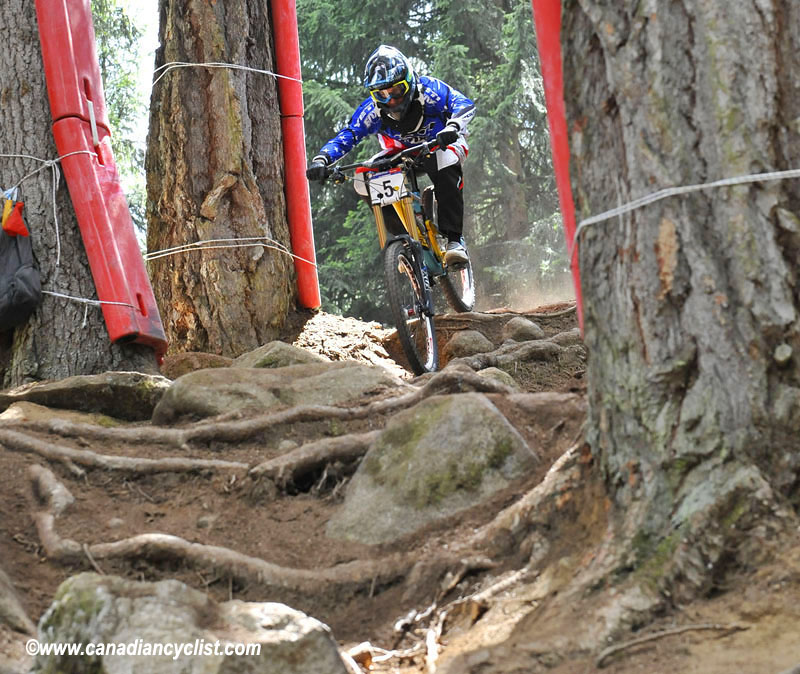 The DH course is a favorite of many riders, making use of the natural terrain for a flowing run

World champion Tracy Moseley (Trek World Racing) holds a commanding 150 point lead over second place Floriane Pugin (Scott 11) going into this final round, but in the downhill discipline, one mechanical or crash could change things drastically.  While these two battle for the title, Rachel Atherton (Commencal) - who has only the slimmest of chances to move into second - will have to fend off challenges to her third place ranking from Sabrina Jonnier (Maxxis-Rocky Mountain).  Jonnier, in turn, will be pushed by Myriam Nicole (Riding Addiction Commencal) and Emmeline Ragot (Team GR).

In the men's competition, Aaron Gwin (Trek World Racing) became the first American man in over a decade to win the World Cup downhill title, with his third place at La Bresse, France, two weeks ago.  Greg Minnaar (Santa Cruz Syndicate) has a 151 point lead over Gee Atherton (Commencal) in the fight for second but, as Atherton knows from his flat tire in round four, one problem can quickly change the standings.  Minnaar, if he makes the podium, will set a new record of 53 World Cup podiums, as would his team mate Steve Peat.  Below the top three, Steve Smith (Devinci), Danny Hart (Giant) and Brook MacDonald (MS Evil) are all in contention for the final two spots on the podium. 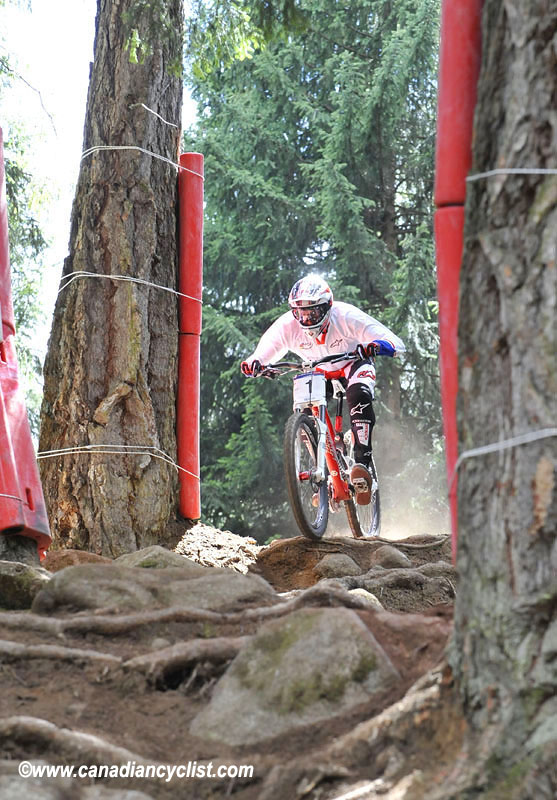