On Sunday, August 14th, the Niagara Classic Road Race was held in Fonthill, Ontario. This race was the seventh and final Ontario Cup (OCUP) event for 2011, worth double OCUP points. Historically this event was held in May but, in an attempt to extend the season, this hallmark event was moved out to August to allow less established races a chance to gain in popularity during the heart of the Ontario racing season (April - June). The course featured a 12.3 kilometre circuit that finished with a climb up Saylor's Hill, which is part of the Niagara Escarpment. The Masters level 1 event covered eight laps for a total of 98.4 kilometres. 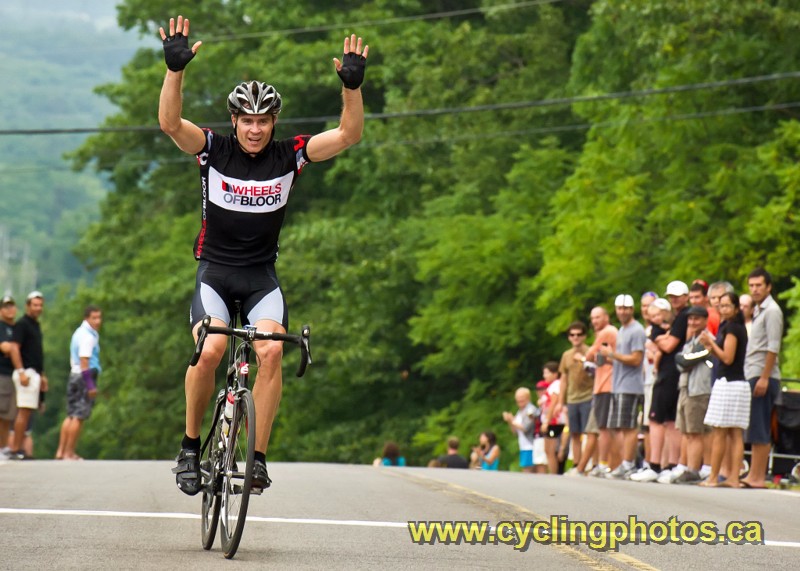 The weather conditions were ideal for racing, with virtually no wind and temperatures around 23C. A rain cloud passed through the area 30 minutes before the start, but the race itself was dry and safe. St Catherine's Cycling Club and a fantastic group of volunteers helped to once again make this a great event. The Masters 1 field was once again the largest group of the day, but still consisted of just 47 riders, which is considerable less that the 80+ that attended the last few Road Races in the OCUP series. It certainly was not the weather or hospitality that kept the riders away, but may have been the time of year combined with the Saylor's Hill; 68 Masters 1 riders took part in the event a year ago on May 23rd, 2010.

With seven riders in attendance, the WOB (Wheels of Bloor) team had the most riders in the race; Sound Solutions had 6 riders, Chain Reaction at 5, and Team London and Z-Team with 4 each. I lined up in what I thought was a mid-pack position, but after looking around I could tell that I was clearly closer to the back. I did not see any other teammates in the front but teammate Bobby Mrvelj was over on the left poised to move up a soon as the lead vehicle came through. We made eye contact, it was clear that he was ready to monitor the front of the race from the start; if we missed out on any of the early moves the rest of the pack would surely look to WOB to lead any chase.

The race began on time at 1:34 pm with a long decent down the escarpment, where speeds reached the mid 70's (kph). I thought that I was maintaining my position in the pack but by the time we flattened out I found myself in dead last position along side Ed Makarchuk (Sound Solutions), as per usual. Ed and I shared a laugh at being at the back again. As we rounded the first corner and headed North I could see one rider 100 metres out ahead of the peloton, up with the lead out motorcycle, it was Bobby. It is always a great relief to see a teammate in the lead and I enjoyed a free ride for the entire first lap at a brisk pace, thanks to Bobby's solo selfless effort.

As we neared the first climb at the end of Lap 1 on Effingham Street, the pack began to cut into Bobby's lead, reducing it to just a few metres. Antonio Goncalves (Team London) closed out the final gap as he took the lead at the steepest point of the climb. We were 'groupo compacto' at the top of the hill.

I rode past 15 guys on the climb but then lost all of my gains on the descent. I watched Ed Makarchuk move up through the pack midway through the second lap. I was glad to see a few of my team mates close to the front, so I stayed near the back for the second lap.

On the second climb up the hill I found last year's Niagara Classic winner Blair Purvis's (Newworld Cycle) wheel and studied his climbing style as I made the ascent. As we descended at the start of lap three I could see a group of five riders out in the lead with no WOB riders amongst them. I moved up to the front end of the peloton just in time to watch teammate Wieslaw Matuszczak launch an attack.

In an impressive display of power, Wieslaw made bridging up look easy. Other riders who hesitated for even a second missed out on the opportunity to leverage Wieslaw's power. When other riders did try to bridge the ever increasing gap, teammate Victor Pwu was on them like a cat pouncing, as he raced up to their rear wheel, discouraging their moves. Two more riders, Mike McKee (Racer Sportif) and Jeff Weber (Chain Reaction) were able to escape from the peloton, but by the time they got away they had some work ahead of them to bridge up to the lead six riders.

Greg Cavanagh (SUL) was one of those who had missed out with no teammates in the break. Greg waited to see who would organize the chase at the front of the peloton, but it seemed like there was absolutely no one interested in chasing the six man break with two riders in between. Some time passed as the break extended their lead to 90 seconds. Justin Rogers and Bob Tomsic (Canhear Uganda) came up to the front of the peloton and completely committed themselves to chasing down the break, not deterred in any way by a lack of assistance from anyone else. Cavanagh joined in the chase efforts but quickly realized that reinforcements would be needed so he faded back through the pack trying to recruit volunteers. The gap grew to close to two minutes.

Carmine Caravaggio (Z-team) moved up to the front and my teammate Ian Scott took notice, not allowing him to escape. Greg Cushing (Z-team) then launched a solo move in the lead up to the climb at the end of lap four. I closed down Cushing's move and Steven Baker (Team Cross) moved up to my wheel. Baker led the field up the hill and I stayed right on his wheel while Ian moved in close behind me. By the time we crested the hill the peloton was all strung out behind us, thanks to Bakers effort. As we turned right towards the descent we could see the break not more than one minute out in front of us. I was now amongst a select group of 6-10 riders with another small group chasing to catch us. I called over to Ian that it 'looked good' and the two of us drove the pace down the descent as we executed on a race plan.

Despite keeping the pace high our group was caught by the small pack behind us. Noting that our chase group of about 15 contained several riders not represented in the break, I moved back as Bob and Justin (Canhear Uganda) diligently returned to their task of pacing the chase. Cavanagh was extremely vocal as he moved through our group encouraging the chase. Midway into lap number four Cavanagh came up to the front with Don Zuck and Ed Maset (Z-team) in tow and our pace sped up. Scott Greene and Mark Mazer (Chain Reaction) moved up to the front to start contributing to the chase as well, as they were unsure if their rider Jeff Weber had been able to bridge up to the break or what toll the bridging may have taken on him.

As we neared the hill at the end of lap five we could see the riders in the break struggling on the climb. Baker took over the lead and steadily drove up the climb with Ian on his wheel while I followed in third. I noticed a gap beginning to form between Baker and Ian so I moved up to close it down. I continue the climb locked onto Baker and then took the lead near the top of the hill.

Baker and I had ridden away from the other riders in the chase group. As we turned West we rode up to Stan Blazek (Kurzawinski) who had been detached from the break on the climb. Despite being tired and traveling at half our speed, Stan was able to accelerate in no time at all and join us on the descent as we closed in on the break which was now broken into two groups of three riders each.

Baker, Stan and I bridged up to the first group of three riders and then continued on to catch up to the leaders, including my teammate Wieslaw Matuszczak. There were now nine of us in a lead group with only Baker and myself being new to the group, while one of the original eight had fallen behind. It did not take me long to realize that there were few workers in this group, since many were spent from their previous efforts. Cary Moretti (Team IFG) took regular turns in the front and provided pleasant banter.

After having taken a turn in the front, I looked back to see when the next rider would come through. I noticed Wieslaw on my wheel and a bit of a gap to the third rider so I put my head down and pushed the pace. I continued riding hard until I turned onto Effingham Street and then asked for some help from Baker who had moved in right behind me. Baker, Wieslaw and I had separated from the group of nine while Moretti was fighting to join us about 30 metres back. I did my best to keep the pace high to prevent Moretti or any other riders a chance to catch on as we headed up to the hill.

Baker took over at the base of the hill while I once again followed closely. Unfortunately Baker's effort detached Wielsaw. As we rounded the corner at the top I looked back to see Moretti and Wieslaw fighting to join us while the rest of the riders had been gapped. We waited for the two riders and then continued down the hill as a group of four. We worked together until we hit the hill again at the end of lap number seven, where Baker once again took over at the front. I rode up the hill a half a wheel's length behind Baker while Moretti and Wieslaw faded a little . I attacked just as the gradient became less severe near the top. Fortunately, I was able to open up a 20 metre gap on Baker by the corner and then extend it on the decent, taking advantage of the additional momentum an extra 50 pounds affords while going downhill. 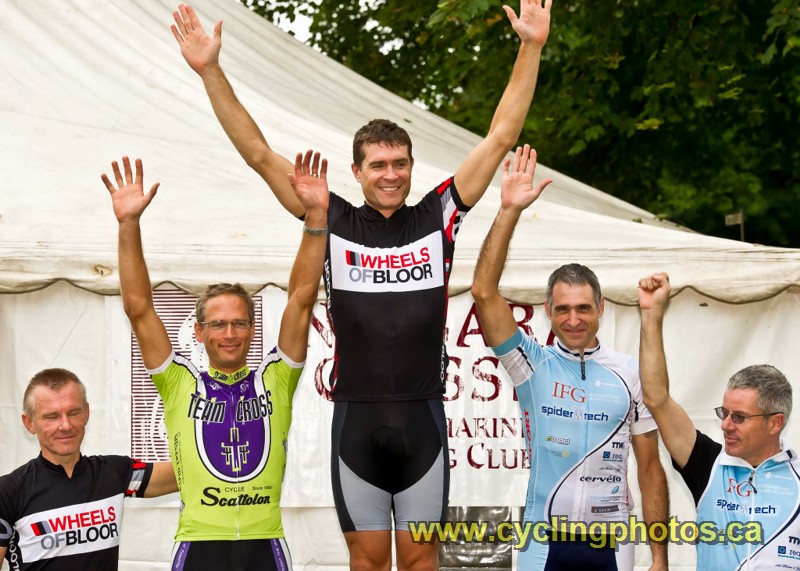 All four of us who had ridden together for the previous lap rode solo for the final circuit. I finished in the lead while Baker took second, Moretti third, Wieslaw fourth and Andrew Stewart (Team IFG) finished in fifth place.