The final team for Canada has arrived in Champery, Switzerland, in time for the start of competition tomorrow.  There have been some changes to the riders here, primarily due to injury, plus some injuries that could affect the start list.

In the Cross-country, Andrew Watson will be racing in Elite Men, in place of Neal Kindree, who withdrew.

In the Downhill, as we previously reported, 2010 silver medallist Steve Smith withdrew from Elite men after breaking his leg in training at the final World Cup.  Elite woman Micayla Gatto, injured at the BMX Nationals, will also not compete.

National Elite men's champion Andrew Mitchell and Yann Gauvin both declined their invitations for the national squad, however, Remi Gauvin has been added to the Elite men's team.

In the Elite women's Downhill, Anne Laplante (who was also the only woman selected for 4-Cross) decided not to attend the Worlds, as did Danice Uyseugi.

For men's 4-Cross, Harold Woolnough will be the only Canadian, since Matt Zdriulk and Kye Walstrom decided not to attend.

Canada has one entrant in the Trials competition - John Webster in the 26" men's category.

There have also been a couple of injuries since the team arrived in Champery.  Under 23 women Mikaela Kofman and Rebecca Beaumont are 'day-to-day' for starting their cross-country race on Thursday after crashes in training.  Kofman broke her nose and a rib, while Beaumont suffered a shouder injury. 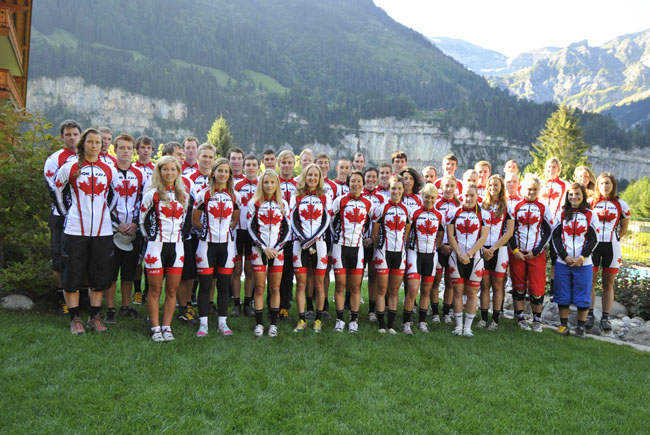