The 22nd edition of the Mountain Bike World Championships begins tomorrow in the Swiss alpine village of Champery, 90 minutes south of Geneva.  Champery has played host to the World Cup three times, and is known for its extremely technical cross-country trails, and its very steep, fast downhill. 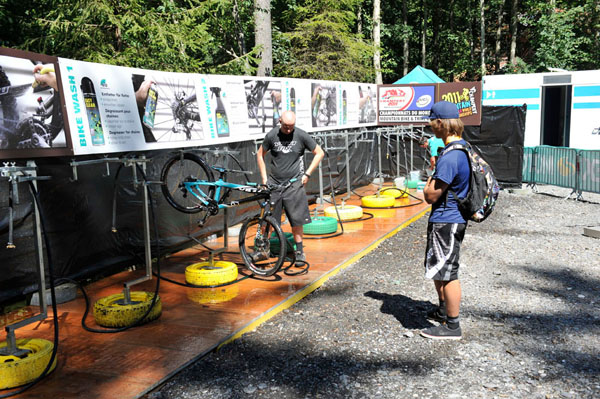 Organizers have set up a fancy bike wash

The action begins tomorrow with the Junior Women's Cross-country, followed by the Team Relay.  Switzerland is a favourite for both events, with Jolanda Neff easily winning both of the last two World Cup Challenge races for Juniors.  In the Team Relay, Switzerland is going for a record fourth title, but their biggest competition is likely to come from Canada - also going for a fourth title.  The Canadian team is headlined by Catharine Pendrel and Max Plaxton. 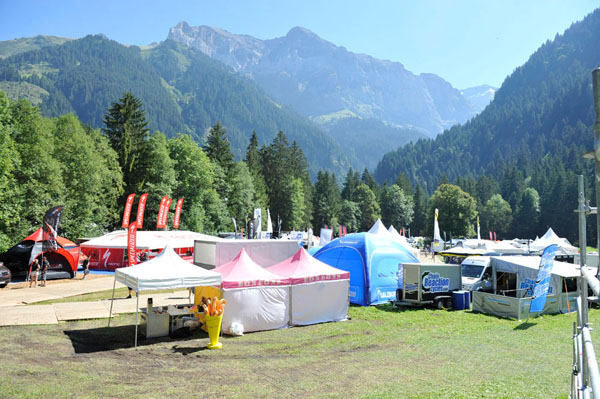 The Expo is beginning to take shape beneath the Alps

Thursday, the Junior Men and Under-23 Women compete for their cross-country titles.  Anton Cooper, the phenomenal first year Junior from New Zealand, is the clear favourite for the men's race.  In the last two World Cup Challenge races he dominated, riding the rest of the field off his wheel on the first lap.  The Under-23 women also has an overwhelming favourite, in the form of Julie Bresset (France), who won the Elite World Cup title in Val di Sole, Italy last weekend.  Bresset is required to race in her age category for the world championships.  Another World Cup rider dropping down to her age category who should medal is Great Britain's Annie Last. 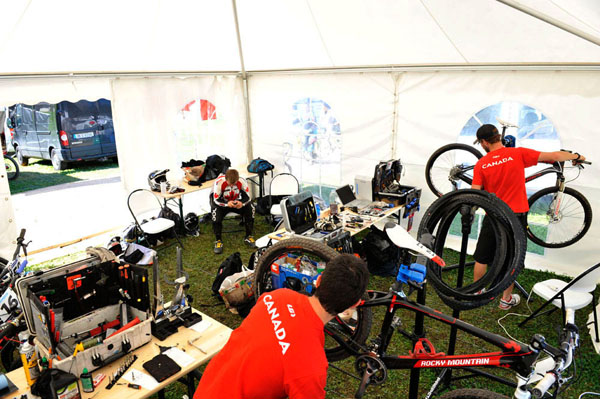 Friday, cross-country competition continues with the Under-23 Men and, in the evening, the 4-Cross championship will take place on a newly-designed track.  Gerhard Kerschbaumer (Italy), the World Cup champion, has been almost untouchable this season, although he will get some competition from Alexander Gehbauer (Austria) and Thomas Litscher (Switzerland).

For the 4-Cross, organizers decided to go for a less 'BMX-y' style, and included a creek crossing and a wooded section, to make it more of a mountain bike course.  In the men's field, World Cup champion Jared Graves (Australia) will try to take back the title he lost last year to Tomas Slavik (Czech Republic).  Others to watch include Michal Prokop (Czech Republic) and the Swiss pair of David Graf and Roger Rinderknecht.  On the women's side, Anneke Beerten (Netherlands) has dominated the World Cup, winning her fourth title.  However, the Dutch rider has never won the world title, something she desperately wants to do.  Others to watch are defending champion Jana Horakova (Czech Republic), Switzerland's Lucia Oetjen and American Melissa Buhl, the 2008 world champion.

The cross-country events conclude on Saturday with the Elite Women and Men.  In the women's race, Canada's Catharine Pendrel has been battling all season on the World Cup circuit with Julie Bresset - who is racing Under-23.  However, the world number-1 ranked rider will face strong competition from the defending world champion Maja Wloszczowska (Poland), who finished second to Pendrel last week at the World Cup final.  Others to watch include the resurgent Gunn-Rita Dahle Flesjaa (Norway), Italy's Eva Lechner and Russia's Irina Kalentieva.

The men's race comes down to one question:  can anyone beat Jaroslav Kulhavy (Czech Republic)?  Kulhavy won five out of seven World Cups this year, including the final two this month leading up to the Worlds.  He faces a formidable field, led by 2009 world champion Nino Schurter (Switzerland) and four-time champion Julien Absalon (France).  Both riders are the only ones to have beaten Kulhavy in World Cup competition this year, and both have made winning the world title their major goal of the season.

The world championships conclude on Sunday with the Downhill.  In the women's field, the competition all season has been between three riders - defending champion Tracy Moseley (Great Britain), Floriane Pugin (France) and Rachel Atherton (Great Britain).  Others to watch include Myriam Nicole (France), the winner of the final round of the World Cup on a similar technical course, and Emmeline Ragot (France), the winner of the World Cup here in Champery last year.

American Aaron Gwin has dominated the men's Downhill World Cup this season in the same way that Kulhavy dominated the cross-country.  Gwin took a record five World Cup victories out of seven races, often winning by large margins.  Others to watch include Greg Minnaar (South Africa) and 2010 Champery World Cup winner Gee Atherton.  Missing from the field is the 2010 Worlds silver medallist, Steve Smith (Canada), who broke his leg in training at last week's World Cup final.  Returning to racing, after missing much of the season with a shoulder injury, is defending world champion Sam Hill (Australia).  Hill said today that after three easy runs his shoulder is still painful and weak.

Race Note:
The cross-country races will all begin with a three kilometre start loop and then laps on the 4.8 kilometre circuit.  The Junior Women will race three full laps after the start loop, the U23 Women and Junior Men four laps, the U23 Men and Elite Women five laps and the Elite Men six laps.  Other than the junior Women, the distances are subject to change, based on weather conditions.