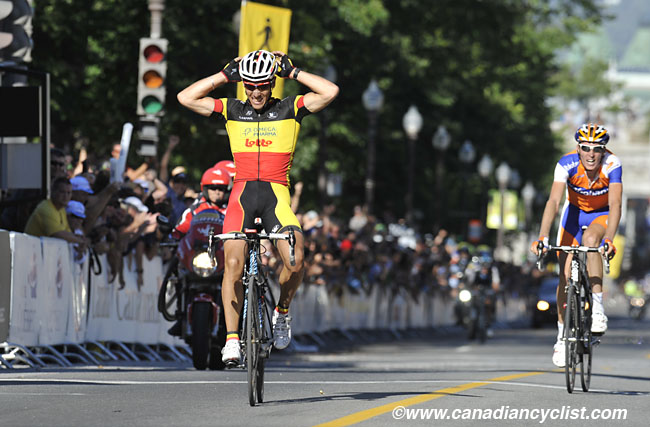 The 16 lap, 201.6 kilometre race saw an immediate attack by Canadian Will Routley (SpiderTech p/b C10) and Michael Morkov (Saxo Bank-Sungard).  The pair couldn't gain more than 12 seconds before being chased down.  Multiple efforts to get away ensued, but nothing stuck until three riders broke clear on the second lap - Jesus Herrado Lopez (Movistar), Cristiano Salerno (Liquigas) and Tony Hurel (Team Europcar).

This trio was acceptable to the peloton, and they quickly built up a significant lead; up over five minutes by the end of the lap.  They continued to pad their advantage, to seven minutes before Team Sky decided the advantage was getting too much, and began to reel them back in.

"In our team meeting, we had decided that we didn't want a break to get more than about seven minutes out," explained Barry.  "So Jeremy [Hunt], Christian [Knees] and I were at the front quite a bit bringing it back down.  Unfortunately, it came back a little quicker than we had hoped for."

The steam was going out of the break as the laps piled up, with Lopez quickly building up an insurmountable lead in the Mountain competition.  as the distance dropped below 100 kilometres to go, the gap was down to 3:30, and at 55 kilometres it fell below one minute, with the catch being made at 40 kilometres to go.

A group of 11 broke away shortly after the original break was caught, including potentially dangerous riders Christian VandeVelde (Garmin-Cervelo), Jurgen Roelandts (Omega Pharma-Lotto) and Matteo Trentin (Quick Step).  However, they were quickly brought back, and Trentin attacked again with 28 kilometres remaining.

Hesjedal and Gilbert were at the front of the shrinking peloton as the group crested the main Cote de Montagne climb behind Trentin, and stared across at each other, waiting for the other to chase.  Neither did, and it was up to Team Sky and Rabobank to do the work to bring him back.

Canadian national champion Svein Tuft (SpiderTech) then jumped, and was joined by six others, but the peloton was not willing to let anything get away at this point and they were reeled back in.  This was the status as the riders headed towards the start-finish to begin their final lap, when Gilbert launched what would prove to be the key move, attacking up the gradual climb towards the line.

He began the lap with a six second advantage, then slowed slightly to wait for a select group of nine riders join him for long, flat ride along the base of the course.  Gesink, Rigoberto Uran (Team Sky), Levi Leipheimer (RadioShack), Bjorn Leukemans (Vacansoleil-DCM), Fabian Wegmann (Leopard-Trek), Simone Ponzi (Liquigas), Marco Marcato (Vacansoleil-DCM), Simon Clarke (Astana) and Gerald Ciolek (Quick Step) were the riders to make the lead group; significantly, Hesjedal did not.

"I just didn't have the legs when it went," Hesjedal admitted.

The group quickly took 35 seconds out of the peloton with seven teams represented, and the race was clearly down to these ten riders.  Gesink opened the battle for the win on the steep Cote de la Montagne climb, and Gilbert immediately responded, and then counterattacked, opening a six second gap with two kilometres remaining.

Gesink chased valiantly, steadily closing in on the Belgian champion, but ran out of road, crossing the finish line just behind Gilbert.  Uran took the final podium spot, nine seconds back, with the remainder of the lead group trickling across the line in ones and twos.

"It was a very, very difficult race today," agreed Gilbert.  "Sky imposed a very high tempo from the start; along the river it was as much as 60 kilometres an hour and everyone was getting very tired.  Six laps from the finish the Rabobank team took over and kept it very hard.  In the final lap there were ten of the strongest riders together at the front.  I went on my own at first, but then I waited for the others and saved my attack for the final climb."

"Gesink was chasing me, and when a rider can see you as you are climbing to the finish, you are like a target and it is easier for them, so with 700 metres to go I had to go hard again, and it wasn't until 100 metres were left that I knew I had won, and could relax and enjoy my victory."

"This can't compare with any other classic I won this year, because today i had to ride on my own, with no team to support me.  I was pretty stressed about this.  If I had started to ride hard earlier in the race, like Ryder Hesjedal did, well you saw Ryder - he was not there at the finale.  So it was impossible to take the whole race on my shoulders.  So it was different from other races because I did not have a team."

Gilbert also admitted that the six points he needed to win the World Tour ranking was very much on his mind.  "I was under pressure, because I had six points to take, but they were six very difficult points to try and get.  But as the race went on and evolved things were getting better and better for me.  The peloton came down [shrunk] and then there were only ten of us.  I knew that I could probably finish fourth or fifth and get the six points I needed.  So in that sense I could relax and concentrate on victory.  For me to win here and get the points is mission accomplished."

Robert Gesink now has three podium finishes in three World Tour races over the past two years, in Canada.  "This is the start of the end of season.  I glad to have great shape at this time of the year, and I think I am in even better shape than last year.  Last year I could only follow the guys on the steep climbs and this year I could make the race happen.  I'm happy with the result, although when I crossed the line I was not so happy ... One lap more than last year made it a better race I think."