Canadian riders just missed the podium in the women's time trial at the Road Cycling World Championships on Tuesday, finishing fourth, fifth and seventh after spending most of the day in the leading positions.  Judith Arndt of Germany won the world title, with a time of 37 minutes and 7.38 seconds for the 27.8 kilometre race against the clock.  Tara Whitten was fourth, 26.16 seconds behind, and only two seconds out of the bronze medal position.  Clara Hughes, who returned to cycling after an illustrious speedskating career, was fifth, 36.79 seconds behind the winner, and Rhae Shaw, a newcomer to the national team attending her first world championships, was seventh, 39.23 seconds in arrears. 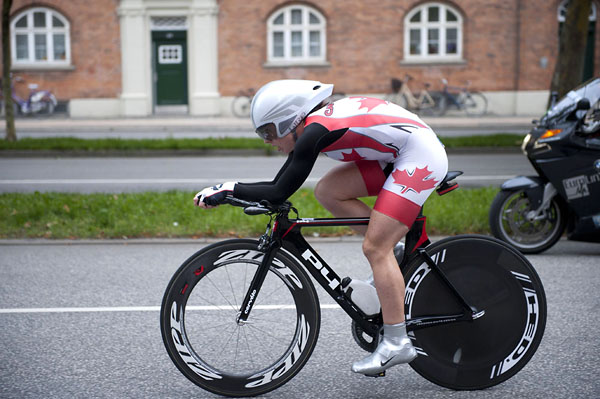 Shaw, a former triathlete who left a career as an engineer with Microsoft to be a bike racer, came into her first world championships with no knowledge of how she could finish.  "I'm rooming with Tara [Whitten], and I said to her last night: 'I hope I don't finish last'."  The 35 year old was the seventh starter in the 51 rider field, and held the leading position until her team mate Hughes supplanted her, 13 riders later, by a slim 2.44 seconds. 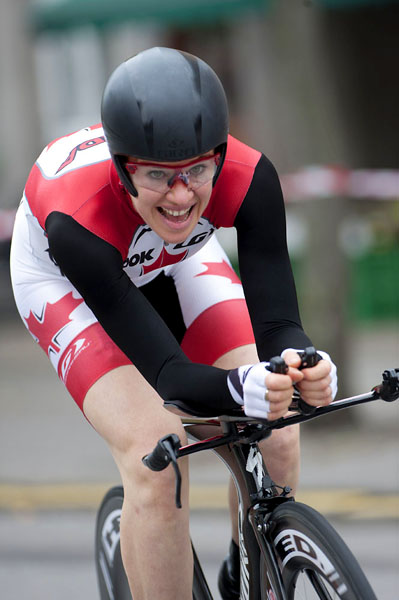 Clara Hughes (For more photos scroll to bottom of page)

Hughes, a double bronze medalist in cycling at the 1996 Olympics, left the sport for speedskating after the 2000 Olympics, winning four medals in her winter sport, including gold in the 2006 Games.  after retiring from speedskating following the Vancouver Games last year, Hughes announced that she was returning to cycling, with hopes of competing in the 2012 London Games.

The 38 year old rider, who turns 39 in one week, became the Pan Am champion, and then the Canadian champion earlier this season, confirming how serious her bid is to return to the upper ranks of cycling.  Hughes' result was all the more remarkable given the rain storm that swept the circuit during her ride.  For the first half of her race, Hughes recorded the fastest split of the day - nearly a minute faster than the next fastest rider.  The rain and the slippery road conditions that resulted slowed her considerably - 12th fastest for the second half of the race.

"It was hard.  There was a huge storm that blew in on the second lap of my race.  But I'm really satisfied with my ride; it's my first time back at the world championships in a decade or more, and I did everything I could and I didn't crash.  I think this was a good sign that things are going in the right direction, and I know that I can do better than I did today.  I knew coming in that I could be top five and with the conditions I did everything that I could, and I have to be satisfied with that." 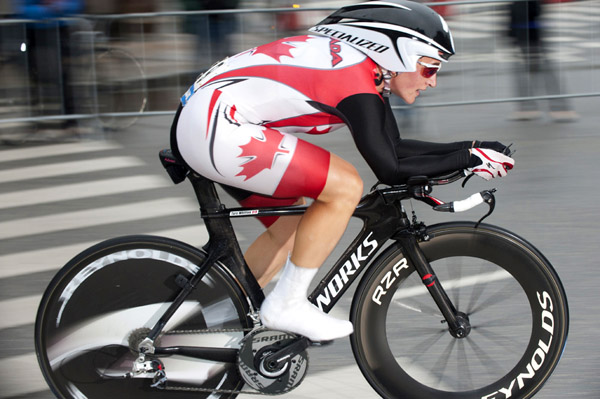 Tara Whitten (For more photos scroll to bottom of page)

Whitten, the reigning track cycling world champion in the Olympic Omnium event, started ninth from last as the storm conditions were easing, but with the roads still wet and slippery.  Whitten was 4.59 seconds behind Hughes after the first lap, but steadily improved through the second half of the race to finish 10.63 seconds ahead and take the lead.  She was bumped from the lead by New Zealand's Linda Villumsen, then to the bronze medal position by second to last starter Arndt, and finally lost the bronze medal to defending world champion Emma Pooley of Great Britain, the last rider on the course.

"I'm known for starting to hard and then fading, so it was something that I was focussed on; just being really controlled on the first lap, and having something left to push on the second lap.  I know that conditions played a role today - Clara had wetter conditions on the second lap, and i had it worse on the first lap - but I'm really happy with how I rode my second lap today.  Fourth is tough, especially when it is really close, so I'm just re-living a lot of my ride, and thinking about where I could have gained time.  But at the same time I have to be happy; It's my best result ever at Road Worlds." 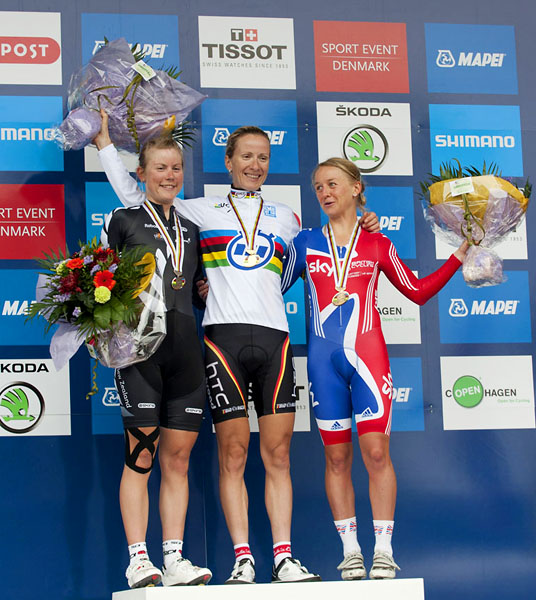