Canadian riders did not fare as well as hoped today on the first day of road race competition at the Road World Championships. The Junior women's race was marred by crashes, with three of four Canadians affected, while Canada's lone entry in the Under 23 men's race, Guillaume Boivin suffered a broken saddle early in the race and had to chase back to the peloton, wasting valuable energy. Great Britain's Lucy Garner took the Junior title, and France's Arnaud Demare the Under 23 one.

The racing moved from downtown Copenhagen north, to the town of Holte in the Rudersdal region. The 14 kilometre circuit has many very narrow sections, and only two small climbs per lap - the final one to the finish line. The Junior women raced five laps and the Under 23 men 12 laps.

Gusty wind and patchy sun made it a chilly day, with many of the Junior women racing in armwarmers, jackets and vests. Multiple crashes on the first lap took out a number of riders, including newly-crowned time trial champion Jessica Allen (Australia), who broke her wrist. Also affected were Canada's Allison Beveridge and Alizee Brien. Beveridge banged her knee when she went down, but reportedly suffered no serious injury, and eventually pulled out of the race. Brien came close to catching the peloton with a chase group, before fading to finish 61st. 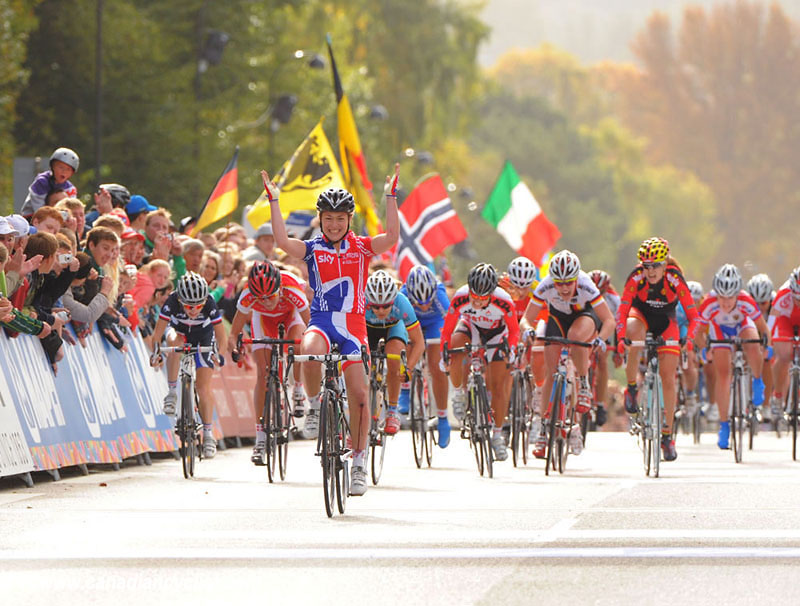 Great Britain's Amy Roberts broke away early into the race, spending two long laps out on her own, never gaining more than 15 seconds before being reeled in. A number of attacks were launched in the remaining lap and a half, but none were allowed to gain more than few seconds, setting the stage for a sprint up the final climb. Garner timed her move perfectly in the final 150 metres to open a couple of bike lengths on Jessy Druyts (Belgium) and Christina Siggaard (Denmark) at the line.

Gabrielle Pilote-Fortin was the top Canadian in 19th place, with the same time as Garner. Annie Ewarts was also in the bunch, but was caught behind a crash, eventually rolling in 50th.

Interviews with Pilote-Fortin and Ewart are posted Here

In the Under 23 men's race there was an early attack by Brazil's Carlos Manarelli, which didn't gain much traction until Gianluca Leonardi bridged up on the third lap. The duo then took the lead to over four minutes before the Brits, Aussies and Danes decided to start pulling it back. The catch was made with about two and a half laps to go. A counter attack saw six riders briefly go clear - Louis Meintjes (South Africa), Eugenio Alafaci (Italy), Christopher Juul Jensen (Denmark), Natnael Berhane (Eritrea), Philip Lindau (Sweden) and Maxat Azazbayev (Kazakhstan) - but they were caught just before the start of the final lap.

The Australians seemed to take immediate charge on the final lap, but were bumped by the Italian squad and Great Britain, leading to mass scramble up the final climb, with the French duo of Demare and Adrien Petit moving to the front in the final 150 metres to capture both first and second. Great Britain's Andrew Fenn took the bronze medal. 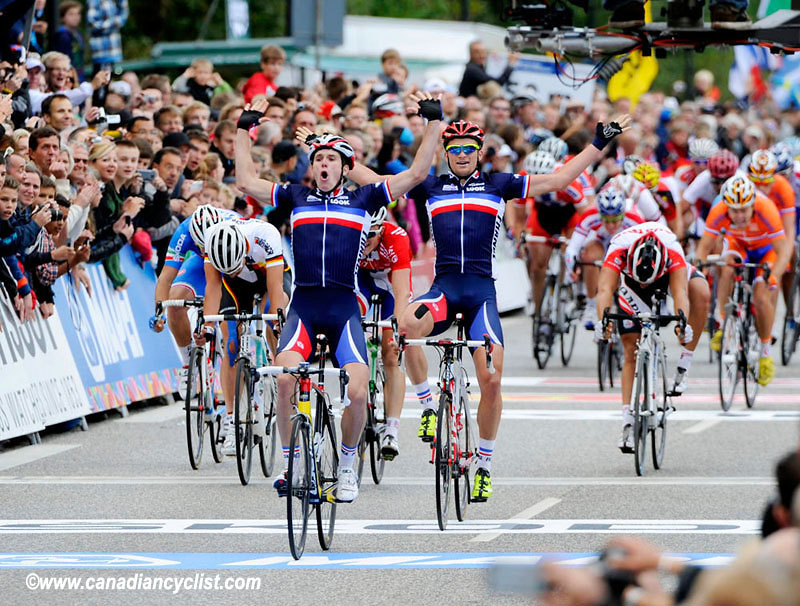 Canada's Boivin, the bronze medalist last year, came into the race without much racing in his legs after requiring surgery earlier in the year for a leg problem. On paper, this was a good course for the SpiderTech rider, but he suffered a number of mechanical problems, which ultimately knocked him out of the peloton before the final corner.

"It's the continuation of my season," commented Boivin philosophically. "I wasn't too lucky this year. I had good legs for the win today. I had to deal with several mechanical failures. I also miraculously survived a near-fall, and it knocked the front wheel. I had to chase hard to get back in the group, and in the chase I realized that my bike had a problem. The seat was broken, the rear wheel was in not turning right, and I had to change my bike. All this ended in style, with a wheel missing about 10 spokes with less than a kilometer to go. It ended all my hopes of a victory."

"I knew the course was easy enough, and that many countries wanted a sprint at the end. I really played the race low-profile, staying behind because it is not hard to be safe at the back. I wanted to save my energy as much as possible for the finish. It's pretty hard being alone, without teammates, to position yourself. I had to hide behind and wait until the last minute. It certainly increases the chances of a fall and contact with other riders."

"I came here with one goal in mind, and that is to win the race. I felt good throughout the race, I was never really in the red, and my legs were great. I was really confident for the final. It's sad, because it was my last chance in U23. [But] I now turn the page on 2011 and the focus for the 2012 season, and hopefully find my way to victory next year."

"I like it when the races are difficult; they are beautiful races. It motivates me to participate in renowned races with impressive palmarès. I hope to perform well during the spring classics and have good races. Riding in the Elite category does not scare me because I already race at that level. I will be looking to start next season with the ambition and intention to win races."