In Burlington, Vermont, New England’s best got some real cyclocross conditions at the Nor’Easter ‘Cross powered by Eastern Mountain Sports and two British racers who live in Belgium powered their way to big wins. The course, which only a day earlier had been tacky, technical and fast became a long, slow mud slog after a night’s worth of rain.  For British Champion Helen Wyman, the slog was good. “I prefer when the going is hard,” said the Kona Factory Team racer. For fellow Brit, Ian Field (Hargroves Cycles), who moved to Belgium in order to race on the Continental circuit, the slow going of the course suited his strength.

Elite Women  Photos
The field for the Elite Women was easily one of the best to ever toe the line in New England. In addition to the British Champion and eventual winner, Wyman, spectators were treated to Wyman’s compatriot, Gabby Day (Renner Custom Cyclocross Team), Mid-Atlantic superstar Laura Van Gilder (C3 p/b Mellow Mushroom) and former New Zealand National Champ Linnea Koons (Embrocation Cycling Journal). Also at the starting block were locals Amy Dombroski (Crankbrothers Race Club) in her final stateside appearance of the season and Lea Davison (Specialized Racing) who is coming off a top-10 at the Mountain Bike World Championships and is gunning for a place on the US squad for the 2012 Olympics. 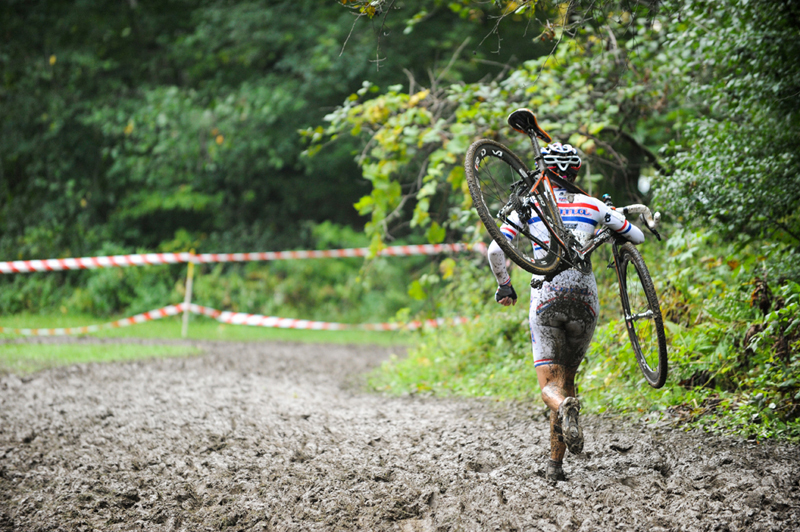 From the starting gun, Wyman showed that she was the class of the field. Taking the holesot, she started to extend a lead immediately. Wyman proved the adage “smooth is fast” by riding completely smoothly and putting almost two minutes into the remainders of a shattered field. On the first lap, there was a bit of a pile-up coming off the first beach section, and Van Gilder fell behind, allowing Dombroski to take second position alone. It looked like it would be a race for third between Van Gilder, Andrea Smith (LadiesFirst Racing), Day and Sally Annis (crossrestults.com p/b JRA Cycles). From the back, because she didn’t have a ranking coming in, Davison came roaring through the Van Gilder group. She seemed right at home in the thick mud. “I had a blast out there today, “ said the Olympic hopeful. Able to drive hard, Davison looked like she had third place wrapped up until Dombroski got caught up in the course tape and had her derailleur break shortly after the first pit, forcing her to run the balance of the final lap. Gamely though, and to the delight of her supporters, Dombroski didn’t give up and ran through to the finish, visibly upset by the mechanical, but still in 8th place. 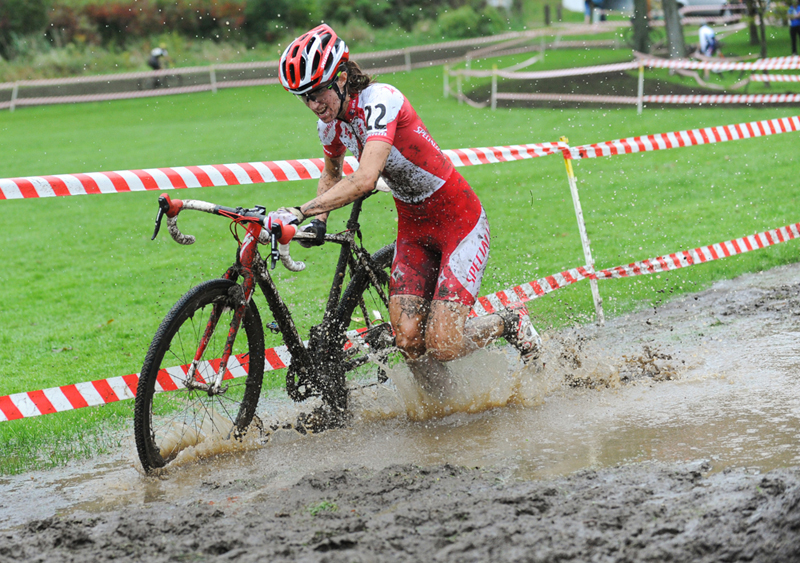 With Dombroski out of the picture, Davison turned up the throttle, further opening the gap to Van Gilder and the Pennsylvania rider couldn’t bring back. Van Gilder held off a hard-charing group of Smith, Annis and Day for third. With the other three rounding out the top six. 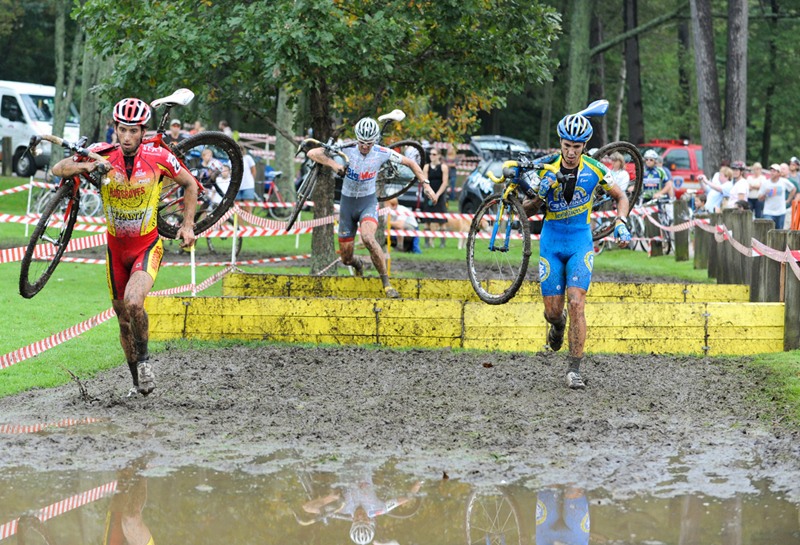 The start of the race saw third-year cross racer Dylan McNicholas (cyclocrossworld.com) take the holeshot and put the hammer down hard for the first two laps. McNicholas, who is a second-year elite, drove the field through the long thick straights and was only brought back after putting a foot down during a technical descent. Once McNicholas was caught and left behind, Bazin and Field took to the front. Bazin, who is coming off a very intense road season, had the power while Field, whose specialty is racing in the muck, drove through the corners. Behind, Van Den Bosch and Lindine separated themselves from the group and took up the chase together. By the fourth lap, these two groups had come together and it was clear that the winner would come from this newly minted group of four.

Behind the leaders, several groups formed, broke up and reformed; Parbo, Myerson, Dillon, Luke Keough (Champion System p/b Keough Cyclocross) and Richey came together in all possible iterations, with none able to get away for any length of time.

At the front, Lindine was the first to lose the pace, with three laps to go, by taking a spill on a long off-camber. Bazin, who had been yo-yoing off the back of the group – catching on the straights while losing time in the deeper sections also dropped the pace. Field and Van Den Bosch, then, were left to determine the winner. Each put in attacks over the final two laps. Repeatedly, Van Den Bosch would attack but make a small mistake, giving Field the opportunity to get back on. Field made his decisive move early in the final lap, pushing hard and putting Van Den Bosch into difficulty, ultimately forcing his hand and driving on for the win. Van Den Bosch came across the line second with Bazin third. Justin Lindine came across the finish line for fourth and to the cheers as the top American. Lindine has quickly become the crowd’s favorite for his full-out, hard racing style and his calm, approachable manner off the bike. 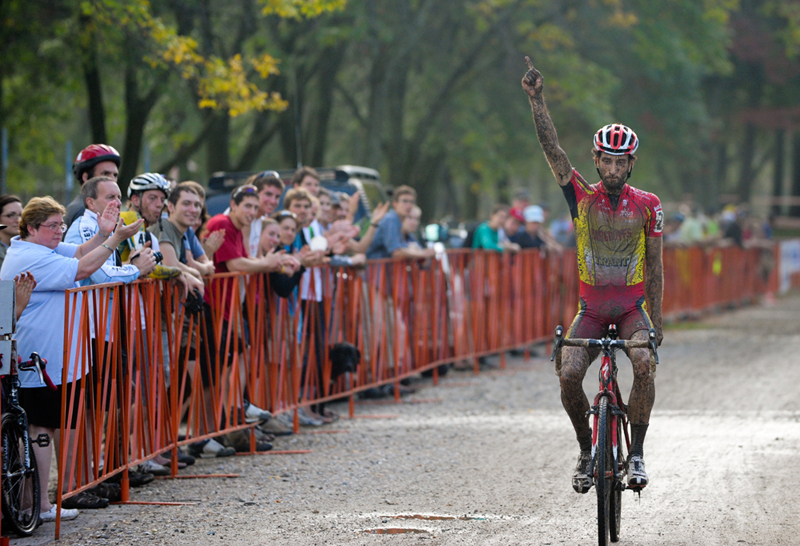 Parbo separated himself from his group and came across the line fifth. “I am very, very happy with this result. It’s been a difficult time getting my season organized and I’m happy to have this result to show to my sponsors,” said the many times Danish Champ. The Canadian, Craig Richey came across sixth ahead of Dillon. Adam Myerson came in eighth and, while he had hoped for a better result, was quick to praise the Nor’Easter Fest staff and Eastern Mountain Sports for supporting a great and unique event like Nor’Easter ‘Cross.

Also of note, finishing tenth was RGM Watches/Richard Sachs racer Christian Favata, who battled back from a broken chain in the start that had forced him to run the first half of a lap.

Liz Lukowski of NYcross.com, her third victory of the young season, won our Amateur Women’s race. She won ahead of Vickie Monahan (Expo Wheelmen) and Christin Christoph (Competitve Edge Cycling). Lukowski and Monahan were our top two Masters Women as well. That podium was rounded out by Amanda Bedard (Cycling Concepts).

Kevin Hines (Corner Cycle) used his prowess as a motocross racer to slog through the mud and get back to the top step of the Masters 35+ podium. Brian Wilichoski (cyclocrossworld.com) came close to taking the top step after being twice runner up last weekend, but it was not to be as he finished second ahead of Todd Bowden (Expo/Superior Energy).

Once again, the Amateur Men’s race was dominated by junior Nate Morse (cyclocrossworld.com). He rode smoothly away from the rest and held Competitive Edge Cycling’s Sean Kennedy at bay. Third place went to Brendan McCormack (Hot Tubes Development Team), who is flying the New England heritage flag high this season.

The Verge Series picks back up next weekend at the Great Brewers Gran Prix of Gloucester. That race will also be the kickoff for the new Shimano New England Professional Cyclocross Series. We’ll have lots more coming this week about New England Worlds and the New England Holy Week of ‘Cross.

For all registration and schedule information, head here: .

The Verge New England Cyclo-Cross Series includes fifteen races in eight venues. The opening weekend is in Williston, Vermont on September 17th and 18th with the Green Mountain Cyclocross Weekend. The following Saturday, September 24th brings Nor’Easter Cross at the Nor’easter Festival in Burlington, Vermont. The Great Brewers Gran Prix of Gloucester comes next on the 1st and 2nd of October followed by the Providence Cyclocross Festival presented by Interbike on October 8th and 9th.  Rounds 8 and 9 bring the series back to New Gloucester, Maine for the Downeast Cyclocross weekend on the 22nd and 23rd of October. The series hits the home stretch on November 5th and 6th in Northampton, Massachusetts for the Cycle-Smart International. After a two-week break, the series pays its annual visit to Sterling, Massachusetts for Tom Stevens’s Bay State Cyclocross on November 26th and 27th. The series finale comes the next weekend with the NBX Gran Prix of Cyclocross. For more information, visit www.cycle-smart.com/neccs