Canada's David Veilleux finished a strong 19th in his first attempt at the Elite men's road race in the Road Cycling World Championships on Sunday. Veilleux finished the 266 kilometre race in five hours, 40 minutes and 27 seconds, the same time as the winner, Mark Cavendish of Great Britain. Cavendish's win was the first for a Brit since the great Tommy Simpson won in 1965. Canada's two other participants, Svein Tuft and Michael Barry, were caught in a crash with 70 kilometres remaining. Tuft finished 139th while Barry was forced to drop out. 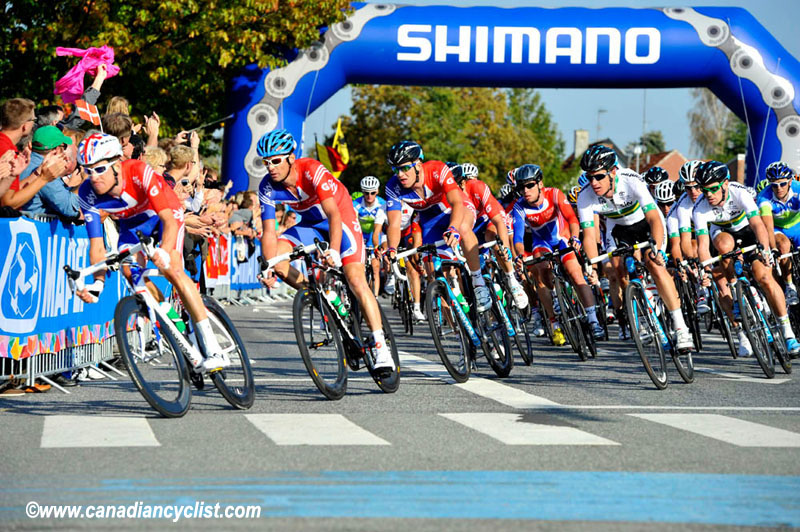 Cavendish came into the race the overwhelming favourite, but there were numerous contenders who could deny him the title - Andre Greipel (Germany), Matt Goss (Australia), Philippe Gilbert (Belgium), Oscar Freire (Spain) and, of course, defending champion Thor Hushovd (Norway). The finish did not particularly suit Cavendish, with a long uphill drag to the finish, so his victory was by no means assured.

Unlike the rest of the races, the Elite men started in downtown Copenhagen and rode approximately 30 kilometres along the coast to the 14 kilometre circuit in Holte, where they did 17 laps. The weather was the best of the week; sunny and mid-20s. 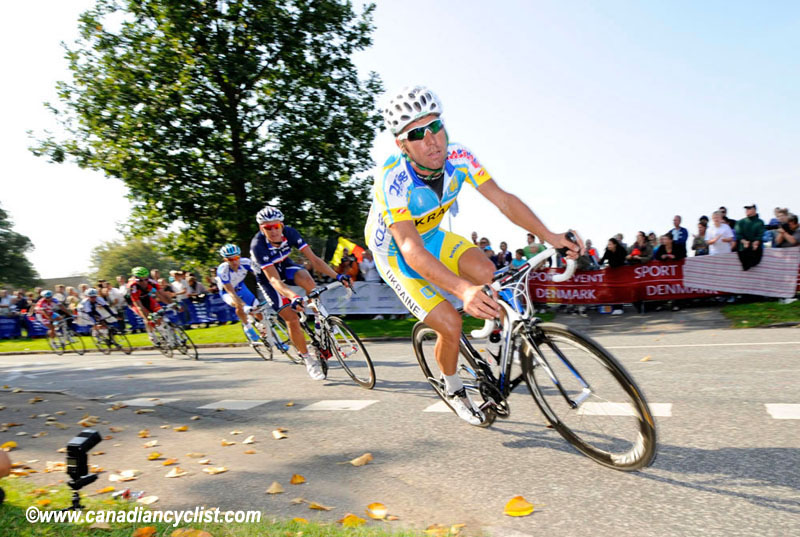 The narrow circuit was well suited for the tactics Great Britain chose: set tempo for the entire race. After a flurry of attacks, a non-threatening break of seven got away on the lap circuit - Pablo Lastras (Spain), Anthony Roux (France), Christian Poos (Luxembourg), Maxim Iglinskiy (Kazakhstan), Oleg Chuzhda (Ukraine), Robert Kiserlovski (Croatia) and Tanel Kangert (Estonia). Iglinskiy was the rider who put the most work into driving the break, eventually taking it up to eight minutes.

It was at this point that Britain took full control of the race, looking like a team time trial squad at the front of the race. Germany assisted a bit with former time trial champion Bert Grabsch, and young Ben King from the U.S. also spent time at the front. 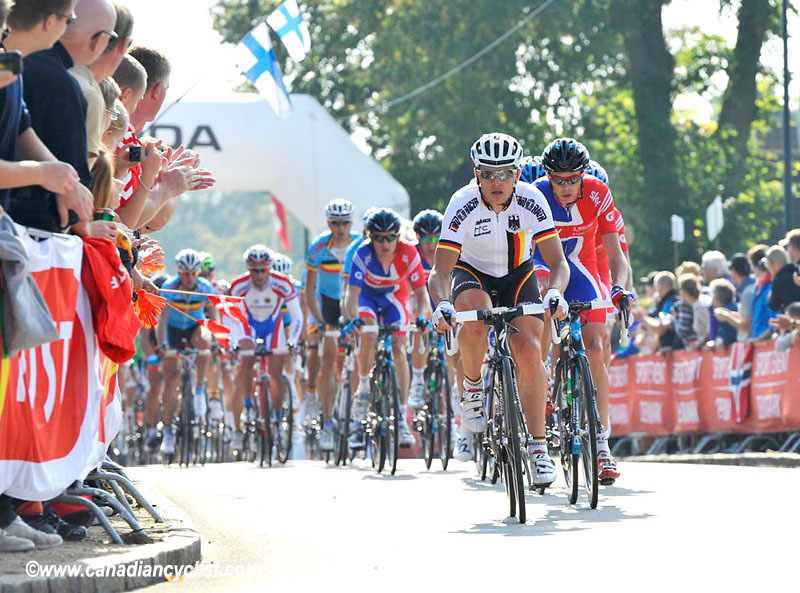 The gap was coming down steadily when Belgian made their first effort with six laps to go, an attack by Johan Van Summeren that also took his team mate Oliver Kaisen, Simon Clarke (Australia), Yoann Offredo (France) and Luca Paolini (Italy). The group scooped up the original break, but Britain did not falter in their relentless steady effort to pull them in.

The crucial event of the race occured with five laps to go, when a huge crash took down or held up at least 50 riders. Michael Barry went down hard, wrenching his knee and breaking his bike. Tuft did not go down but was caught up for a couple of minutes, as was Hushovd, ending his chances for a repeat win. Greipel's lead out rider, time trial champion Tony Martin was also caught behind the crash. 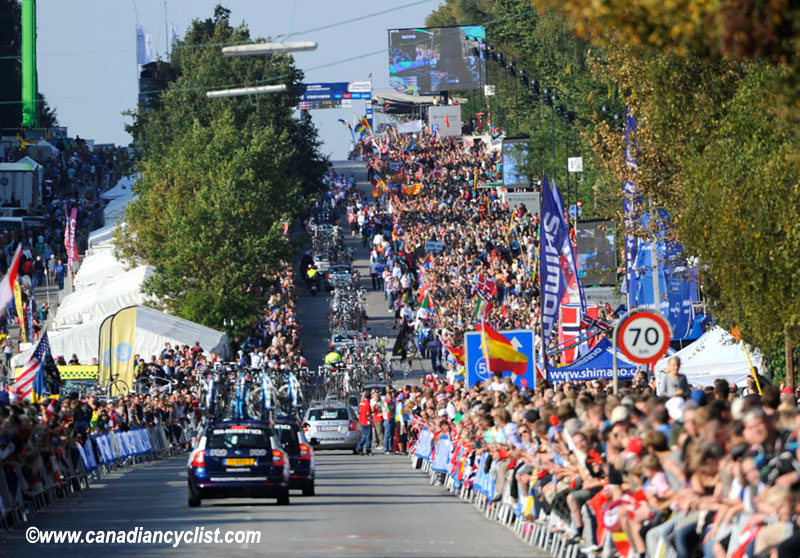 The remaining 65 or so riders in the peloton caught the break with three and a half laps to go, setting the stage for a sprint finish. A flurry of attacks tried to get away, including Thomas Voeckler (France) , but they were all brought back. Britain looked to be tiring as the race went into the final lap, and Australia and Italy both challenged with sprint trains, but the Brits regained control in the final two kilometres, before losing it to Australia in the last 500 metres. Cavendish got on the tail end of the Aussie train for Goss and swept by in the final 200 metres to win by a bike length. 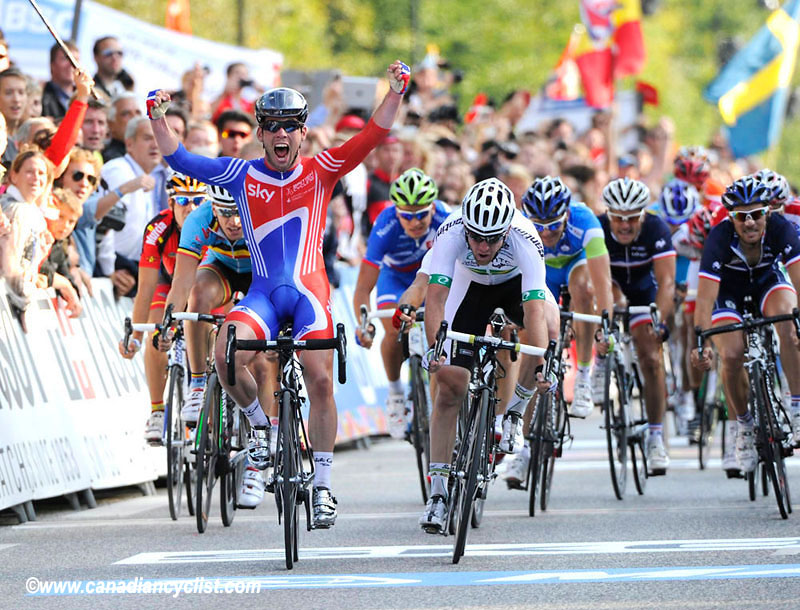 For Veilleux, at his first Elite Worlds, it was an excellent finished, only marred by the lack of a team mate to move him a bit higher. "I was happy to be there in the final selection," commented Veilleux. "I don't really know what happened, I think a crash split the group. It was perfect for me, the group came down to 55 guys or so. I only had one bullet, so it was wait, wait, wait ... be conservative, be smart, and it paid off great. I gave it everything I had, but I was pretty tired. I like to have a lead out guy, but unfortunately I was the only one left from the team."

See our interviews with Veilleux, Tuft and Barry Here.

The photo gallery from the men's race can be found Here.