On September 17th, under the lights of the Red River Co-op Speedway in St Adolphe, MB, a large crowd of cyclists and spectators gathered to take part in the inaugural DarkCross Cyclocross Race, presented by Wallace + Wallace.

“What a night! The buzz from the event continues, even days later,” reported Chris Huebner, DarkCross Race Director. “Despite the success of DarkCross, my head is already spinning with ideas to make DarkCross 2012 better.” 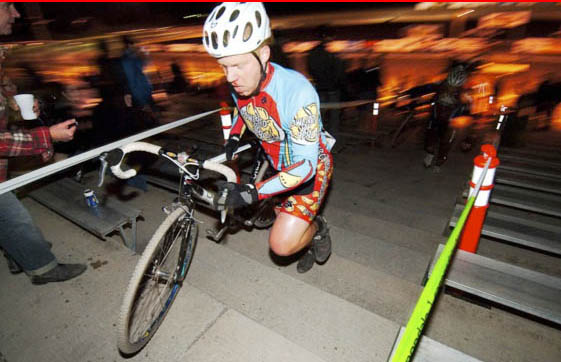 The cyclocross course, which featured a pair of stair run-ups, and surfaces consisting of grass, gravel, and dirt track, provided many opportunities for spectators to get into the action and cheer on the racers, creating a festival-like atmosphere for all. “It was like Disneyland,” exclaimed one racer, while another added, “the fans made me feel like a rock star running up the grandstand!”

“The aim of DarkCross was to come up with something that was far more than just a bike race. We wanted to throw a big cycling-themed party, featuring a beer garden and live band, “psychobilly” act, Farrell Bros. The wild cheering and focused racing combined to create an atmosphere similar to what is seen in cyclocross hotbeds like Portland,” stated Andrea Tetrault, race Co-organizer.

The racing itself served up of plenty of excitement as well. In both the top Mens and Womens races, spectators were treated to hotly contested battles between high-level racers that went right down to the line. Anna Schappert edged out Karlee Gendron at the finish line to win the Women’s 1/2/3 Race. The Men’s Cat 1/2 race featured an intense duel between youngest and oldest riders in the race, with 17 year old Chris Prendergast holding off seasoned veteran Don Sawatzky to take the win. Full results for all races are available at race website (darkcross.ca).

After hearing their event touted as ”the best cycling event in Manitoba in 20 years, maybe ever,” the organizing committee was quick to give credit to its sponsors and army of volunteers. DarkCross Director of Marketing, Kevin Kilbrei said, “An event like this does not happen without significant resources and energy. We are thankful for all our supporters.”