Using cyclo-cross racing for training and fitness to complement her mountain biking, Sin’s race strategy was simple.  “I go out and race as hard as I can” she said.  Starting after the Master 2 Men, Sin (3 Rox Racing) caught all but three of the male riders who began one minute before her.  “My goal was to work my way up as high as I could in the men’s field, and to ride well technically.” 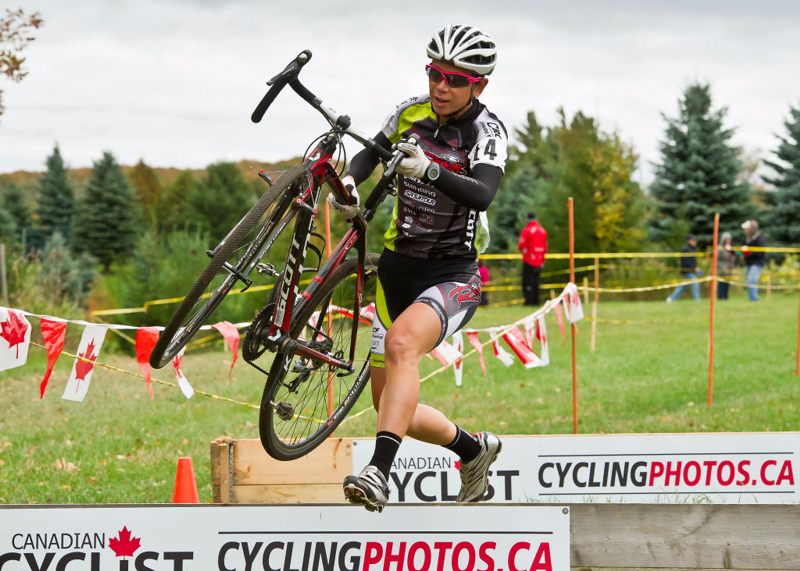 The Collingwood resident plans to contest the National Cyclo-cross championships before indulging in any downtime. Julie Marceau (Lap Dogs) and Briana Illingworth (True North) rounded out the podium.  Conditions during the women’s race were cool and windy, with the twisty course nicely tacky, allowing for fast cornering.

The weather changed just prior to the Senior Men’s race, with a steady rain combining with the cold air to create challenging conditions.  With Belgian ‘cross music serenading the starters, Stafford (Norco Factory Team) and Chown (Team CF) quickly created a gap over the field as they raced for the $100 awarded to the first rider to the barriers.  Chown had a minor fall approaching the double barrier, allowing Stafford to take the prime and establish a small but relatively comfortable lead. 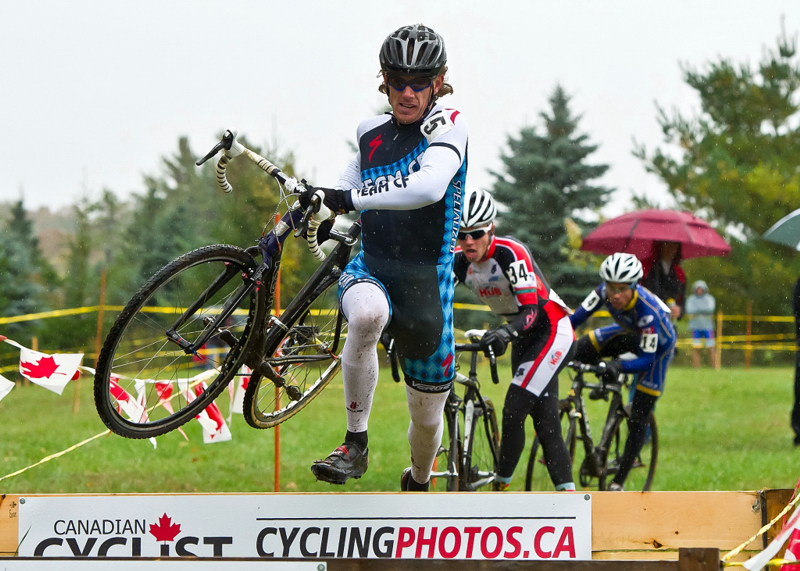 The 20-year old Newmarket resident appeared to be in control and on his way to victory until about halfway through the race when he rolled his rear tubular on an off-camber turn.  Quickly shouldering his bike, he was forced to run 500 metres to the pit area to switch bikes, during which time he was passed by both Chown and Zach Hughes (Norco Factory).

Under way again, Stafford was unhappy with the tire pressure on his replacement bike, and paused to release a bit of air.  According to Stafford, the sudden stop caused his muscles to “lock up”, and he could no longer control his bike properly, and decided that withdrawing was the proper course of action.  “As long as I was going hard I was fine, but that issue with the tire killed me” he commented post-race, while still noticeably shivering.

Stafford’s loss was Chown’s gain.  “Jared and I were at 15 seconds for the longest time” said the eventual winner.  “Then I saw him running.  After that I just kept it clean.  The last lap I was just frozen, I could barely hold the brakes, it was just survival mode.”  Asked what the outcome might have been had Stafford not suffered misfortune, Chown responded: “It would have been....it’s hard to say.  He was holding me off pretty good.”

Despite suffering mechanical problems of his own, and not having a spare bike, second place Hughes was pleased with his result.  “That was my third ‘cross ride of the season.  It wasn’t that bad.  I had some bike issues; It was skipping in the big ring.  I just tried to ride a steady pace so I didn’t make any mistakes.”

Although he works 45-50 hours per week as an assistant site superintendent for a contracting company, the 21-year old Hughes is motivated for the ‘cross season.  “Sometimes my training rides end around 9 at night.  Hopefully I’ll be ready to go full-tilt for nationals.”

The Senior Men’s podium was rounded out by Simon Wagler of Two Wheel Express.  Four-time Hillbilly Hustle winner Andrew Watson made a brief appearance in order to return the Hillbilly Jacket, but did not take part in the race.

Race winner Chown was philosophical about both his age (38) and his reasons for racing.  “If I have a good day I can compete with the local guys no problem.  I’m still fast enough to race elite.  When I’m not fast enough I’ll start golfing.”

Both Chown and his wife Lesley ride for Team CF in order to help bring attention to cycstic fibrosis, a disease his two young children are battling.  “It’s the most common genetic disease for North American children” says Chown.  “The average life expectancy is 30.  I’m just trying to keep my kids around as long as possible.”