MIVA (Mid Island Velo Assn) is holding a four week series of evening cyclo-cross clinics in Nanaimo. Venue is Beban Park BMX track times are 4.45pm - 6.30pm. Dates are: October 13th.,20th. 27th. and November 3rd. Each clinic will commence with a skills development session and practice and conclude with a 30 minute race. No charge for MIVA members, Others pay $5.

This morning, it was about 10 degrees C. colder than in the last few days, with a strong wind adding to the chilliness. Despite this, we had one of the better hill climb turn-outs for the championship. Sole womens entry, Cheryl Morch was first to finish, with a time just 14 seconds slower than her August effort on the same hill. Then Phil Birrer, who started off third, was the next to complete the course, posting a personal best of 13' 58” and this turned out to be a portent of things to come. Masters E, Dave Kenny was next over the line, beating his previous effort on the hill by a scant three seconds. The next three finishers all posted times in the 13 minute range but then Paul Auton surged into view, over a minute faster than the others. He was well ahead of his previous effort on Wiegles and crossed the finish in 12 minutes flat, beating his own previous record by 20 seconds and claiming the $50 prize offered for this feat!with only three riders left on the course and the last starter not yet in sight, Paul was declared the winner. 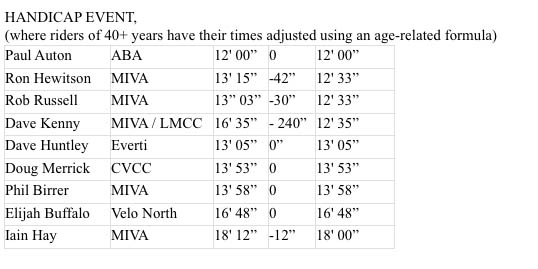 It was good to see Elijah Buffalo from the North West Territories return to ride a club event. Elijah was a regular participant in the Thursday time trials a couple of years ago.
Thanks to Bryan Rehill and Ross Palfery for volunteering.

Now the series has finished, MIVA's next event is the Island Cyclo-cross Championship on October 15th. The club is also running a weekly CX clinic and competition for the next four weeks and will be holding home trainer nights later this Fall, dates and time TBA 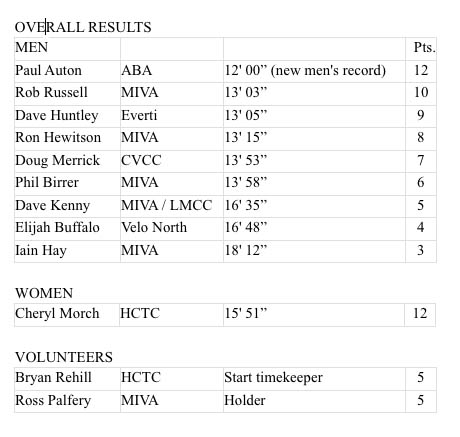