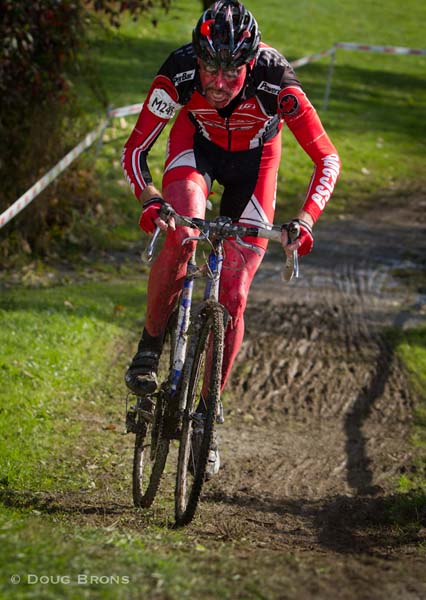 “For Pumpkin Cross’s fifth anniversary, we were treated to uncharacteristic sunny skies – not overly spooky, but definitely appreciated,” said race organizer Barry Lyster. “The dead salmon strewn around the part of the course closest to the river did add some scary, stinky ambiance to our Halloween décor.”

The event saw over 150 racers in a wide range of categories from beginner to elite, navigate the challenging and fun course, which featured slick grassy corners, dismounts over equestrian jumps, and spooky Halloween-themed obstacles like the Spooky Forest, the Coffin, Lezyne Lake, and the Giant Leap of Faith. Twenty excited kids between the ages of two and 12 took to their very own kid’s course located right by the start/finish and the MC for maximum visibility.

“We succeeded in making this edition of Pumpkin Cross better than ever. In addition to record attendance, the costumes were fantastic. I really thought that was Gene Simmons out there racing a cyclo-cross bike. And the ironic giraffe made everyone smile, not to mention the horse,” said Lyster.

“Local Ride mechanic Dave added a great atmosphere to the team tent area on the far side of the course by the barriers with his congo beats.” 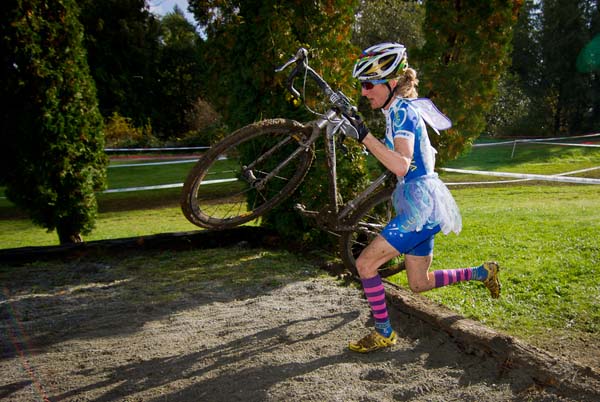 Epic battles unfolded in the feature races of the day: the Open Women’s and Elite Men’s competitions. In the women’s event, 2011 UCI Mountain Bike World Champion and Olympian Catharine Pendrel (Luna Pro Team) of Kamloops bested the defending Pumpkin Cross Champion, Maple Ridge’s Jean Ann Berkenpas (XPREZO-BORSAO) after the two duked it out at the front for most of the 45-minute, five-lap race.

“It was great to see Catharine [Pendrel] join us for Pumpkin Cross. She’s such an inspiration and a true ambassador for the sport,” said Lyster.

In proper Pumpkin Cross spirit, Pendrel was dressed as a fairy, while Berkenpas chose to honour the top female cyclist who inspired her to pursue the sport. In her retro Team Canada gear and accessories, she held a striking resemblance to Olympic medalist, multiple World Cup winner and World Champion Alison Sydor à la 1995. 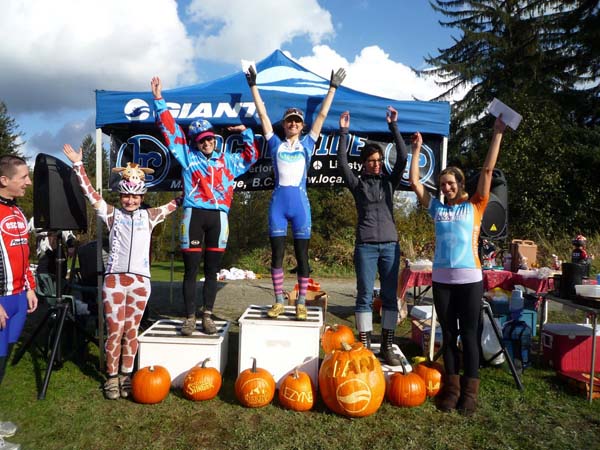 With her third place ride, Jones retained the overall BC Cup lead after three events in the six-race series. 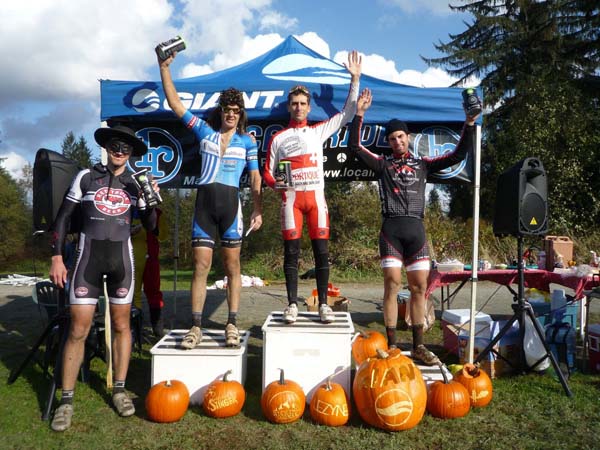 Perhaps the most important and spectacular competition of the day was the annual Pumpkin Cross costume contest with the winner determined by popular vote from the crowd. This year, the voting for three costumes in particular was extremely tight. Finally, when the ballots were counted, it was Local Ride Racing’s Richard Machhein of Port Coquitlam, dressed as a horse complete with jockey and long, flowing tail, who took home the top prize Kicking Horse Coffee gift pack. The first and second runners up also earned valuable Kicking Horse Coffee prizes for their fabulous get-ups. One was ACDC's Angus Young, complete with an electric guitar, which he played during his race as he rode no-hands on the flat open sections, the other a very convincing version of Gene Simmons from KISS. 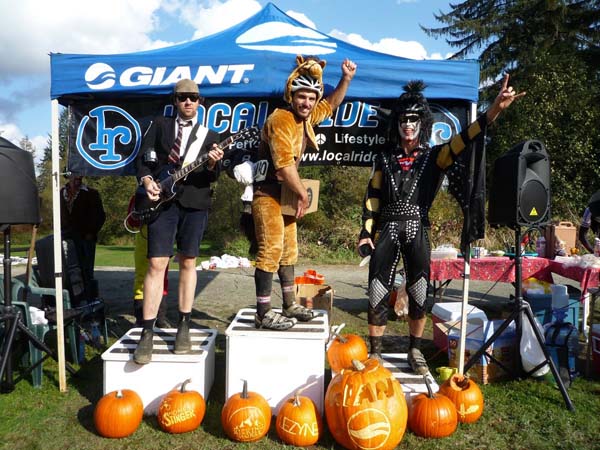 Wai-Ben Wong (Glotman Simpson) scored the win in the Cat 3/4 Men’s race after playing cat and mouse for most of the race with fellow podium-mates Adam de Vos (Oak Bay Bikes) and Maple Ridge’s Brett Wakefield (Local Ride Racing). Machhein’s winning costume may have hindered him in his debut cyclo-cross race, but he was happy with his day. He finished 17th.

Keith Wilson of Kamloops won the Master 3/4 Men’s race, using his impressive technical skills to gain the advantage over his competitors. According to Wilson, he dismounted only once during his entire race, when most people were off their bikes to surmount obstacles four or five times per lap. This was not the case for Wilson, who bunny-hopped the double barriers and rode up the Giant Leap of Faith cleanly in each of his six laps. Jussi Jaakkola and Chris Sayers finished second and third, respectively.

Dylan Doubt (Poler Stuff) won the Citizen Men’s competition, followed in second position by Andrew Tuovinen and Gary Bone in third. Paul Nash (Giant Bicycles), General Manager of Giant Bicycles Canada, dressed as a knight, finished 15th in the race, despite a costume malfunction, which necessitated the removal of his pants with the help of supportive bystanders.

Maple Ridge’s young cyclo-cross star, Maggie Coles-Lyster (Local Ride/Dr. Vie Superfoods+), sped to an easy victory in the U17 women’s category, passing countless riders in other categories along the way in her colourful hippy outfit.