In October of 2010 a number of the Shorthills Cycling Club (SHCC) members joined the Friends of Shorthills Park (FoSHP) volunteer group in the hopes of showing them that all mountain bikers aren’t just a group of people who go too fast and tear up the trails in the Shorthills Park.

It did not take them long.

By the end of October they had gained permission from the FoSHP and the park's Assistant Superintendant to submit a request for a visit from the International Mountain Bicycling Association’s (IMBA) professional trail builders to come and teach the bike club and other users of the park how to repair and build sustainable trails. Their request was accepted in February of 2011 for a visit in April, 2011.

The IMBA visit and the rerouting of a troublesome stretch of the multi-use Black Walnut Trail #2 between the Pelham Road entrance and the Boy Scout road was hampered by a very wet spring, but the first two phases of the trail rerouting and the old trail’s regeneration was finished by June. The SHCC started and completed the third phase in one day in October because of much better weather and a big group of volunteers, including people from the Bruce Trail Association and the general public.

The cycling club was excited to be told by the IMBA trail professionals that they were making history by being the first mountain bike club to legally work on a trial in a provincial park in Ontario.

At the recent January general meeting of the FoSHP the Shorthills Cycling Club presented a symbolic cheque of $11,000 to Ontario Parks representing the monetary value of man hours worked on this trail.

There has been nothing but praise for the trail, and it is holding up very well to the traffic of hikers, runners, bikers and horses despite the unusual weather last summer.

The SHCC has been working at the request of the park staff to help with the planning and rerouting of more trails within the park for 2012. 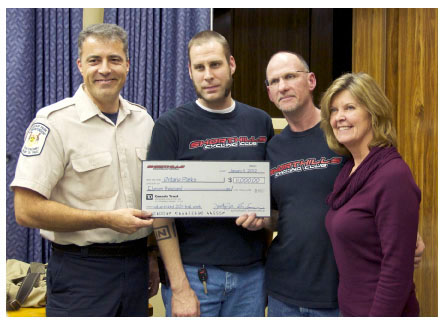