The Optum Pro Cycling presented by Kelly Benefit Strategies women's team executed their game plan nearly to perfection in the first stage of the Redlands Bicycle Classic, the City of Beaumont Circuit Race. Joelle Numainville claimed second place in a frantic field sprint, and Jade Wilcoxson and Numainville claimed the Queen of the Mountain and points jerseys, respectively, in the 72 mile, 3 lap race.

Numainville, who battled for points throughout the race, scored a total of 9 in both intermediate sprints and in the final kick, enough to put her in the green points jersey for tomorrow's criterium. 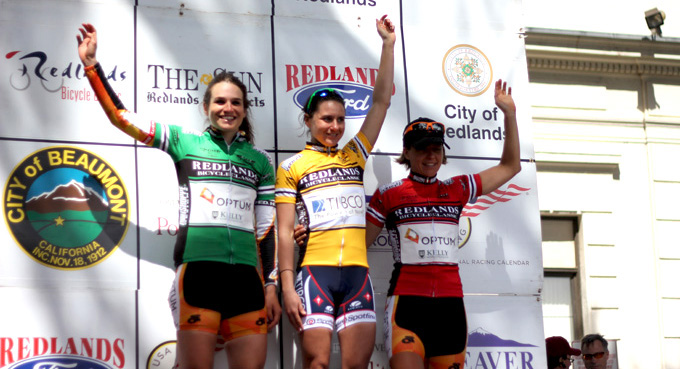 "The plan today was for me to go for the points jersey, and I was in good position for all of the sprints," said Numainville. "I really wanted the final sprint today, and it was a tough uphill finish - Lauren (Rowney, Specialized-Lululemon) and I were battling for position over the last few meters, and unfortunately she was able to come around me. It is extra motivation for the rest of the week."

Jade Wilcoxson and the rest of the Optum p/b KBS team was effective in claiming the day's other prize - the red Queen of the Mountain jersey. Wilcoxson crested first both times up the steep Bogart Park grade, with teammate Courteney Lowe following closely behind. Lowe currently sits in second position behind Wilcoxson in the QOM contest.

"Courteney and I were both feeling strong today in the hills, and the QOM jersey was a major goal for our team today," said Wilcoxson. "Either of us could have taken the jersey today, and we are excited to be able to grab the top two spots in the competition. We can't wait to work to defend both for the rest of the week."

Performance Director Rachel Heal zeroed in on the QOM and points jerseys as goals before the race, and was happy to see her team execute the plan to near perfection.

"I thought we had a chance for both jerseys today, and we had a strong game plan going into the race," said Heal. "Jade and Courteney were both climbing well early on, and that put us in a great position on the Bogart Park QOM. To go 1-2 on both was a bit above expectations, but we'll definitely take it. Joelle was excellent as well in the sprints - she contested all three and claimed the jersey, and narrowly missed the stage win. We will continue to race aggressively and defend both over the weekend."

The racing action continues tomorrow with the City of Redlands Criterium. Although unlikely to shake things up much on the overall standings, it will be another opportunity for Optum p/b KBS to claim time bonuses and contest what will most likely be another frantic field sprint.