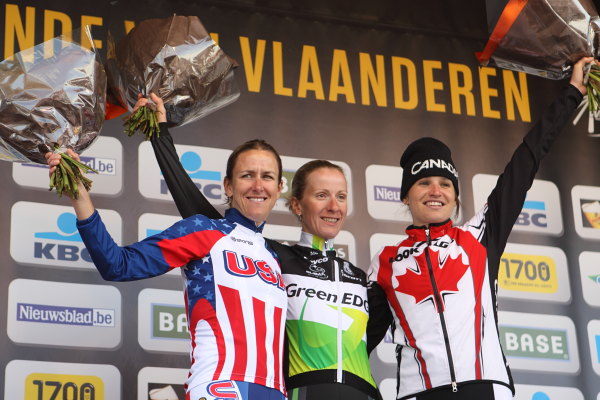 Wearing the colours of Team Canada, Numainville crossed the finish line third in a sprint against Kristen Wild of the Netherlands after 127 kilometres of racing, which included long stretches on Belgium's famous cobbled roads. 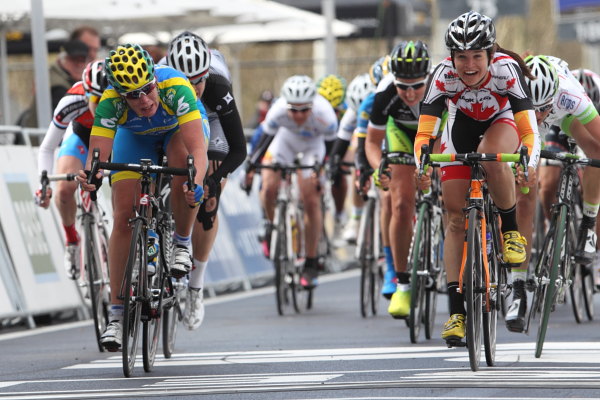 Numainville wins the sprint for 3rd

“I'm so stoked to be on the podium. I was so nervous last night because I knew my form is good and my capabilities.  It's also the first race in Europe. It went from the worst night to the best day,” said Numainville. “I was at the front for a long time in the sprint, but I thought it was better to stay there. I was really calm.  I saw Kristen Wild beside me and knew we would be pushing the same watts as we had the same fatigue from the race.  I just gave it everything I had.”

She then added, speaking of the course: “I thought it was an easier course than last year plus I felt better. It is a great course for me because there are climbs but they don't last for 20 km. The Oude-Karemont climb which was second to last was the hardest climb and I rode it quite well.”

Judith Arndt of Germany and Kirsten Armstrong of the United States finished first and second, and managed to separate themselves at the famous Oude-Karemont climb, and rode together to the finish line.

The Canadian team racing in Belgium today was headed by Denise Kelly, the Canadian Cycling Association’s women’s road head coach, and she was proud of the accomplishment by Numainville: “It's a thrill to be part of Flanders and getting on the podium for Joelle and Canada is amazing. She's had some good results in the States prior to coming here but it’s completely different racing as all the best in the world were here. It's fantastic to carry the momentum from UCI Pan-American Championships to Europe for our spring campaign.  The entire team is looking strong which bodes well for the rest of the month over here.”

The women’s program will continue its course in Europe until the end of April with a series of races across many European countries, and then will come back to Canada in May for the Chrono Gatineau and the 2012 IMMUNITY-FX Canadian Road Championships in June.

Judith Arndt won the Women's Tour of Flanders in a two-up sprint again Kristin Armstrong (Team USA). The German outkicked the American in the final 350 meters to give GreenEDGE its first World Cup win in the third race of the eight race series. 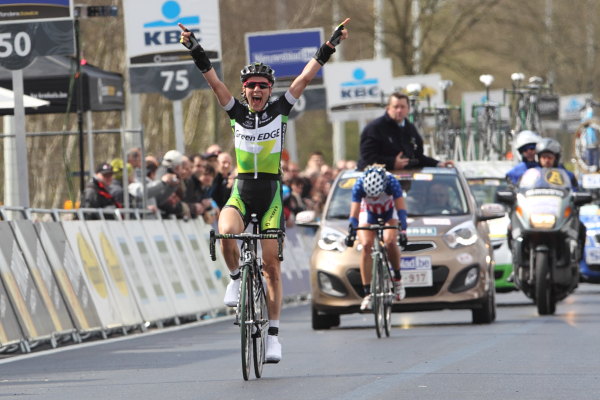 "This is an unbelievable win," said Sports Director Dave McPartland. "We've had a hugely successful run this year, and this is our biggest victory to date. Happy is an understatement."

The peloton split early in the 127-kilometre race. Tiffany Cromwell was represented in the day's first significant break.

"Our plan had been to put riders up the road beginning after 40 kilometers," said Arndt. "We're all pretty good from a break, so we can be aggressive. My teammates did this, and I saved myself for the last three climbs."

Two large groups had formed at the 100 kilometer mark with GreenEDGE-AIS putting five riders in the front group.  Arndt and Armstrong escaped from the bunch over the Oude Kwaremont.

"We had five girls in the front bunch when the race hit the Oude Kwaremont," said Sports Director Dave McPartland. "With 27 kilometers left, we had the strongest presence at the front of the race when Judith went away with Kristin."

Three riders gave chase. Their bridge attempt proved futile. They were back in the bunch ten kilometers from the finish.

"We came into the final kilometer, and I thought to myself 'OK, I have a 50/50 chance here,' " explained Arndt. "I'm usually a little bit better than Armstrong in a normal sprint, but after a hard race with only two riders, it can be a little difficult. She jumped at 350 meters, and I saw her acceleration immediately. I matched it and passed her. She conceded."

"Any of the five girls that were left in the front group are capable of winning a race like this on any given day," said McPartland. "Today was Judith's day. We're extremely thrilled by our first Tour of Flanders."