The third annual Barry’s Roubaix cycling race presented by Local Ride Bike Shop on Sunday saw 100 riders, including some of the country’s best, take to the roads and dykes of Pitt Meadows in a remarkable show of strength, skill, and tactics.

The perfect weather and mountain backdrop set an idyllic scene for what would be a day of dramatic races. “Spectators were treated to lots of action, from aggressive attacks and photo finishes to crashes and flat tires,” said race organizer and Local Ride Bike Shop owner Barry Lyster. The race pays homage to the famous Paris-Roubaix held on the same day in northern France.

Even before the start whistle sounded, it was evident punctures would be a factor in the cycling contest that saw riders compete on a unique course composed of both pavement and gravel surfaces. As racers warmed up on the 10km course aboard carbon-fibre road racing bikes, many rolled back to the pit area on Barnes Road near the Ridge Meadows BMX Track with deflated tires.

“One section of gravel on the 5km stretch of dyke was especially deep and rough,” said Lyster. “There was also one single pothole on the paved section that took out a few riders. Hopefully it will be fixed for next year’s race.”

Despite the lack of hills on the route, the difficulty level was made high by the gravel and winds that picked up late in the morning for the elite races. “Every time we hit the rough gravel section, it was really hard to maintain my speed and hold my line, especially in the deep spots. That part was also where I felt the strongest crosswind. It was a tough race,” said Sandra Walter (Coquitlam) of the Maple Ridge based Local Ride/Dr. Vie Superfoods+ team. Walter placed fifth in the 90km Cat 1/2/3 women’s race, despite a crash on the first lap, and helped her team mate, Steph Roorda (Vancouver), earn the victory. 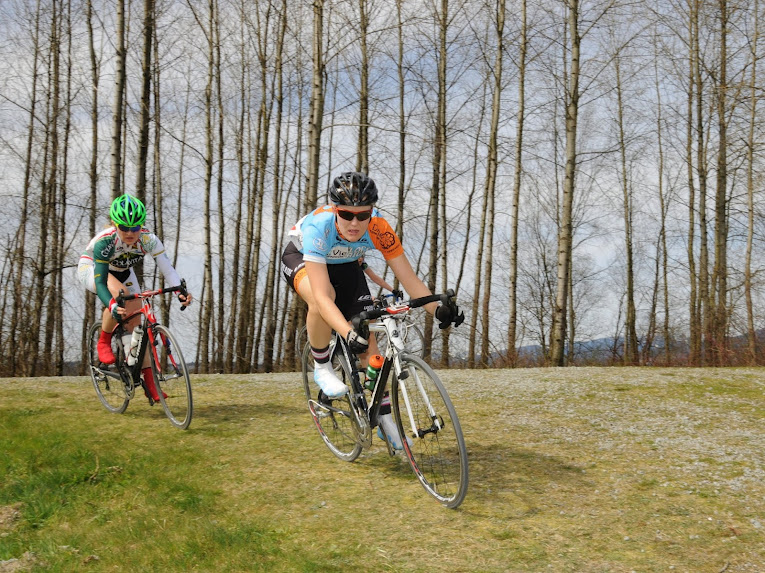 Roorda, recently returned from a successful season on the World Cup Track Cycling circuit with the Canadian Team, was marked as one of the favourites. She has had strong results in Pitt Meadows in the past, with a win at the 2008 Harris-Roubaix, predecessor to Local Ride Bike Shop’s Barry’s Roubaix. Roorda remained a fixture near the front over all nine laps of Sunday’s race, making the initial break of seven riders on the first lap, which was later whittled down to six, and finally four competitors. In the final 200 metres, she accelerated in an incredible sprint and definitively distanced herself from her three biggest rivals to take the win. Claire Cameron (Vancouver) of the Mighty Riders team finished second, followed by 2010 Barry’s Roubaix winner, Maple Ridge’s Jean Ann Berkenpas (Xprezo Borsao Factory Team). Roorda’s victory was no surprise, as the speedster is on track to compete for Canada at the 2012 London Olympic Summer Games in the Women’s Team Pursuit an event in which her team recently won the Pan American Championships. 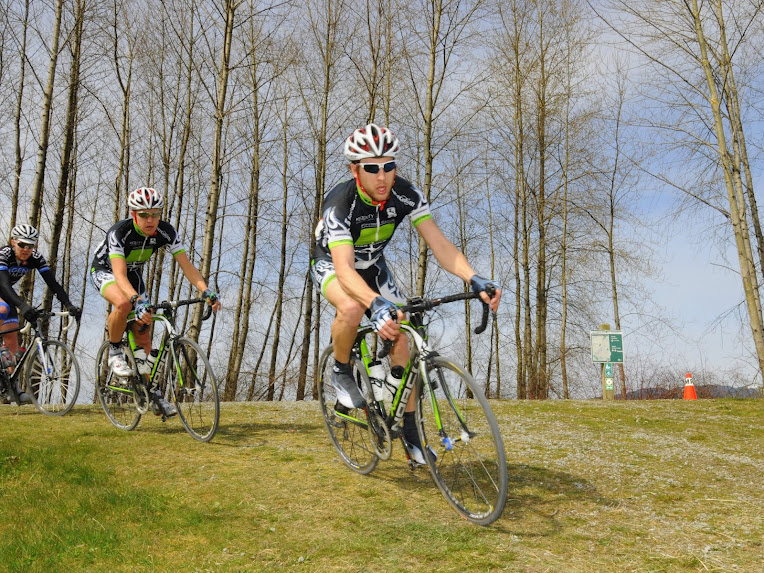 The Cat 1/2 men’s race saw a pack 28 of the province’s fastest riders start the 120km race. The field separated quickly, with a break riding off the front of the field and gaining a gap. Over the course of 12 laps, 17 racers would succumb to the gravel, punctures, or other mechanical and physical factors that would lead to their abandonment of the race, leaving a select group of 11 riders to vie for the win. Despite pressure from last year’s winning Garneau Evolution team, H&R Block squad strongman Rob Britton (Victoria) put the power down where it counted and outgunned Tim Abercrombie (New Westminster) Garneau Evolution for the win by a 15-second margin. Third place was about to be decided in what was shaping up to be a nailbiter of a sprint between Mike Sidic (Vancouver) H&R Block and Jesse Reams (Burnaby) Hagen Berman Elite Racing Team when a vehicle rolled slowly through the finish line and directly in front of the photo finish camera. Recognizing the dangerous situation, both riders slowed down to avoid the vehicle. As a result, Lyster awarded both riders third place.

The Novice men’s and women’s, U17, and Cat 3/4 men’s races were the first to roll early in the morning, with the latter forming the day’s biggest field. The men’s 3/4 category also saw the most carnage – both mechanical and physical, with a large crash marring the competition mid-race. Local Ride Racing’s Ryan Newsome (Port Moody) was caught up in the wreckage and was forced to abandon after giving team mate Richard Machhein (Port Coquitlam) his front wheel. Machhein was the team’s top finisher in 14th place, with Carsten Ivany (Langley) Local Ride Racing in 18th.

Jordan Duncan (Comox) got through the race relatively unscathed to snap up the win ahead of second place, Michael Wegner (Victoria), and third place, Tristan Hughes (Vancouver) dEVo.

Thank you to Local Ride Bike Shop, Kicking Horse Coffee, Hopcott Farms, Ridge Meadows BMX, the City of Pitt Meadows, Cycling BC, and to all of the volunteers who helped make Barry’s Roubaix a success.