After a one year absence, the UCI Mountain Bike World Cup returns to Houffalize, Belgium for the second round of the cross-country series, and the opening round of the new Eliminator event.

Houffalize is one of the true classics of the cross-country circuit, second only to Mont Ste Anne, Canada, in the number of times it has been held, with this year the 17th edition.  However, this year will feature the biggest changes ever seen at Houffalize, with cross-country racers effectively facing a brand new course. 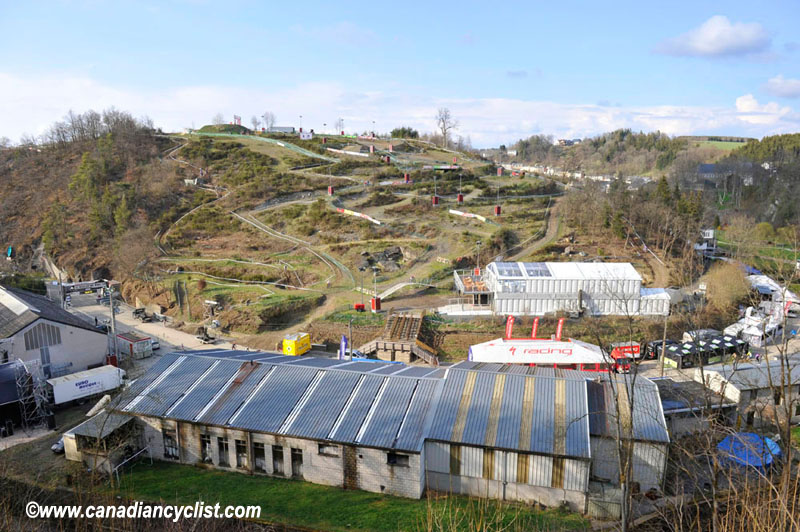 The traditional start-finish in the center of town is gone, with the entire race moved to the southern outskirts.  The new circuit does incorporate some of the climbs and descents that made up the far end of the previous course, but now the entire course has been compacted into that south and west facing slope. 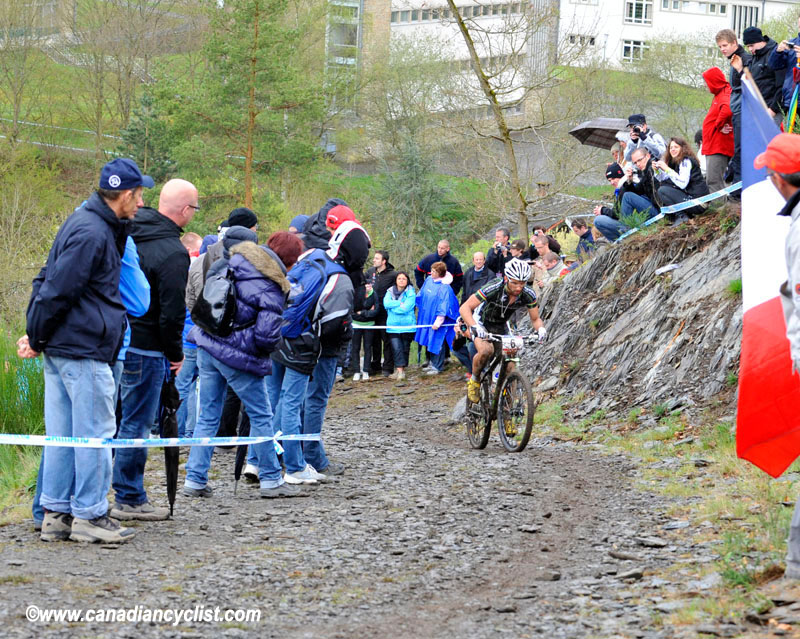 The five kilometre course is extremely spectator-friendly, as it switches back and forth on itself a bewildering number of times in its five kilometre length.  There is no single, race-defining climb, instead, the riders face an almost constant up and down of short, steep ascents, and tricky single track descents on gravel and dirt.  The only pavement is through the start-finish, and that comes after a very steep single track switchback descent, which could prove to be critical for the win if more than one rider are still together at the end.  It is also a very long course time-wise, with lap times for the men expected to be nearly 20 minutes.  The first lap will cut off nearly a third of a lap, allowing the field to spread out before it hits the single track. 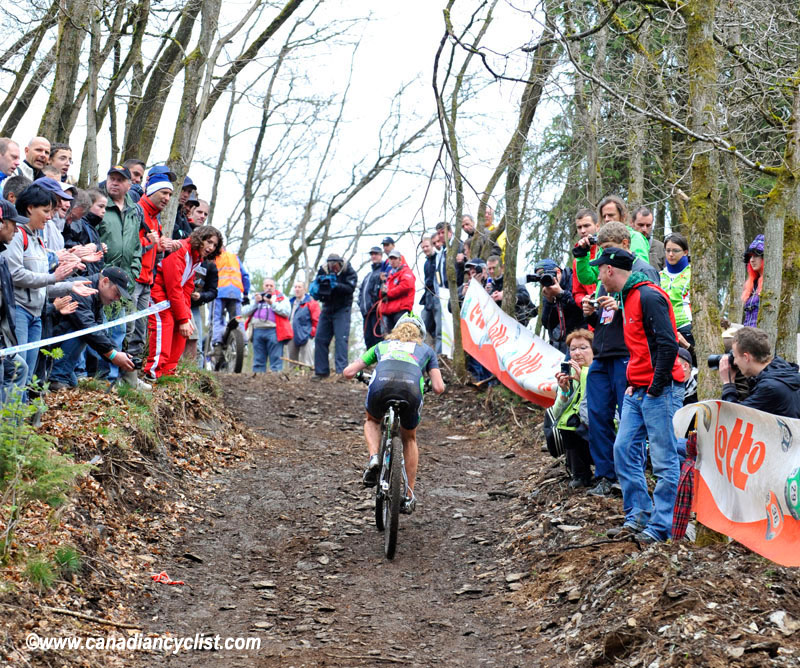 Rider comments are generally positive, with most commenting on the toughness of the course.  "There is a lot of hard climbing," commented Matthias Flückiger (Trek World Racing), "so it is very much going to be a hard race."

Ralph Näf (Multivan Merida) agreed, saying "I think it is a true mountain bike course; it will require skill and strength to do well."  Näf also said that, despite all the tight turns there is ample opportunity to pass on the course on the climbs "if you have the power." 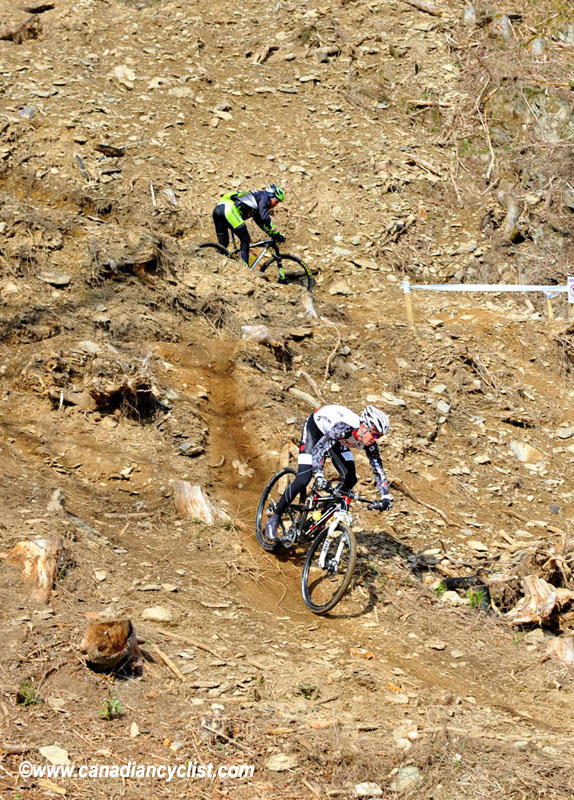 This is one of the few remaining cross-country events in the Olympic qualifying period, so it carries extra weight for the riders.  For the women, we can expect to see a resumption of the battle between World Cup leader Maja Wloszczowska (CCC Polkowice) and world champion Catharine Pendrel (Luna) from round one in Pietermaritzburg, South Africa.  In addition, 2011 World Cup champion Julie Bressett will be looking to return to the top step of the podium after a relatively poor showing for her in the first round, while Emily Batty (Subaru-Trek) will be looking to show that her second place in round one was no fluke.  Besides Pendrel and Batty, Canada also has Marie-Helene Premont (Rocky Mountain), who is looking to bounce back from a poor showing in South Africa, Amanda Sin (Scott-3Rox Racing), Mickaela Kofman (Scott-3Rox racing) and Catherine Vipond (Team Canada), plus Junior national champion Frederique Trudel (Team Canada) in the Junior race.  With Willow Rockwell having announced her retirement earlier this week, the top American contenders will be Lea Davison (Specialized), Heather Irmiger (Subaru-Trek) and Georgia Gould (Luna). 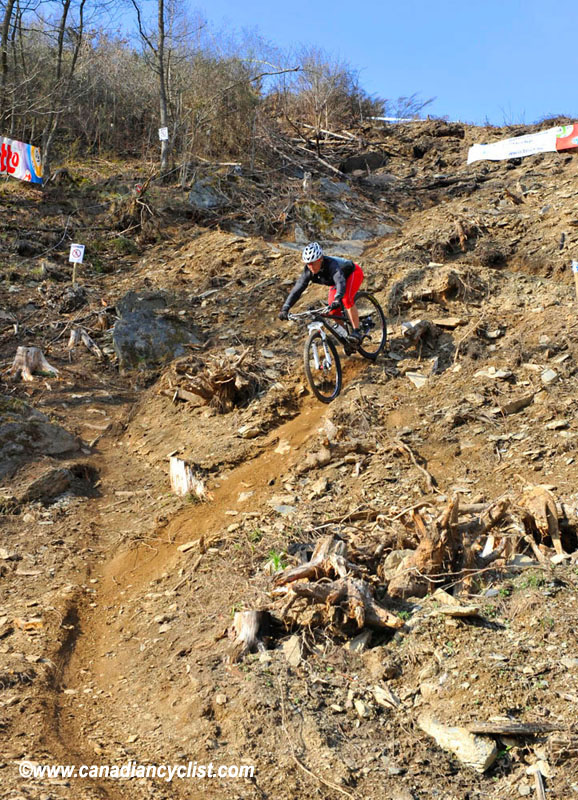 Marie-Helene Premont tests the final steep descent before the finish

Nino Schurter (Scott-Swisspower) comes into Houffalize in the leader's jersey for the men, however, he will face strong competition from four-time world champion Julien Absalon (Orbea), as well as the defending World Cup and current world champion Jaroslav Kulhavy (Specialized).  Kulhavy stated after round one that he didn't have his true racing form yet, but expected to do so by Houffalize.  Also looking to do well will be South Africa's Burry Stander (Specialized), who finished second to Schurter in his home country at round one, before going on to dominate the Cape Epic stage race, so we can expect a strong battle for the title.  American champion Todd Wells (Specialized), who had to pull out of the first round after crashing and injuring his leg in practice, is reportedly full recovered and ready to race, however, he will start well back in 62nd place.  Canada has four men in the Elite race - the Scott-3Rox Racing trio of Derek Zandstra, Geoff Kabush and Cameron Jette, and national champion Max Plaxton (Specialized).  Canada also has two junior men racing - national champion Marc-Antoine Nadon and Alexandre Vialle.

The Eliminator, making its first ever appearance as a World Cup series, is also a unique course.  Whereas previous test events had riders racing through urban obstacles or on grass, this one is more of a combination of a hill climb and 4-cross descent.  Racing in heats of four, the field of competitors will be whittled down to four final contenders in each of the men's and women's fields, for the chance to don the first leader's jersey for this discipline.  Former 4-cross world champion Brian Lopes, who will be racing, says "it's all about the climb.  If you can get to the top of the climb and the traverse section, then it is almost impossible for anyone to pass you.  I'm thinking these are going to be minute and half heats and, while climbing isn't my biggest strength, it's short enough that I think I have a pretty good chance."

Most of the top cross-country contenders will not contest Friday evenings Eliminator, preferring to conserve their legs for Sunday's cross-country.  However, Lopes will be joined by Cannondale pros Manuel Fumic and Marco Fontana, plus Thomas Litscher (Felt Oetztal X-Bionic) on the men's side, and Colnago Farbe Südtirol team mates Nathalie Schneitter and Eva Lechner will race in the women's event against Sabine Spitz (Sabine Spitz Haibike), Annie Last (Milka Brentjens) and Lea Davison (Specialized).  There are over 100 men and 50 women signed up for the qualifying one lap time trial.