Gervais Rioux, a renowned cyclist and native of Mont-Joli, will succeed Pierre Harvey as honorary president of the Tour de la relève internationale de Rimouski, to be held July 12–15 this year. 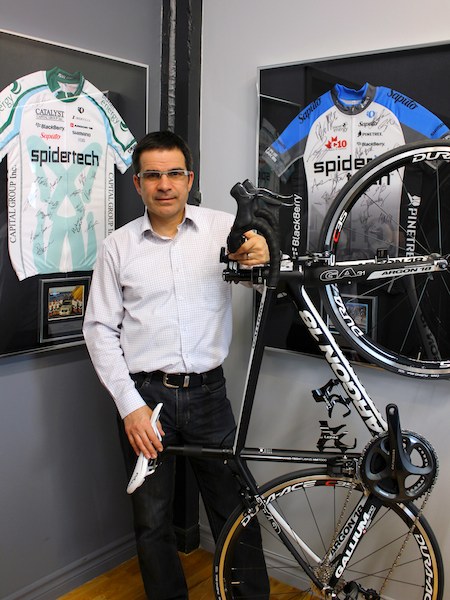 Mr. Rioux is already familiar with the Tour de la relève internationale de Rimouski, having taken part in the event in 2011. He was the official starter for the third stage last year, a course that began in his hometown of Mont-Joli and provided its share of challenges for the young participants. That role gave him the opportunity to see how big the event is and especially the calibre of the competition.

“It’s a great honour for me to accept the honorary presidency for the 2012 Tour de la relève internationale de Rimouski,” said Rioux. “I am proud and pleased that people from my area are hosting such an important event and I wish the entire organization the greatest success. I would also like to congratulate the sponsors who are involved in promoting and encouraging the next generation of cyclists.”

Gervais Rioux had one of the most prolific careers in Québec cycling history, with no less than 150 victories in some 1,500 races over 18 years of competition on two wheels. As a member of Team Canada from 1981 to 1990, he took part in eight road racing world championships as well as the Seoul Olympics in 1988, where he finished 63rd. He also participated in the Commonwealth Games twice during this time, in 1982 in Brisbane and 1986 in Edinburgh, where he placed 21st and 19th, respectively.

On the Canadian scene, Gervais Rioux won three national titles, one in the Junior category and two in the Senior category, as well as a host of classics and stage races. He also made his mark internationally, notably by winning the Tour du Luxembourg in 1983. Today, he is a successful businessman and still in the cycling field as owner of two companies; the Cycles Gervais Rioux bike shop and Argon 18.

“We are very pleased to have Gervais Rioux as honorary president for our event in 2012,” said Michel Fugère, director of the event, adding, “He has an impressive track record as one of the best cyclists in the country and - just as Pierre Harvey has been for the first two years - Gervais Rioux is an inspiration to the young people participating in the event.”

From July 12th to 15th this year, some 200 young cyclists will take to the streets and roads of the region for the third edition of the Tour de la relève internationale de Rimouski, a staged race for competitors in the male and female Youth (15–16 years old) and female Junior (17–18 years old) categories. The main goal of this event is to prepare these athletes for international competitions and to allow them to experience a race similar to the Tour de France, albeit on a smaller scale of four days. The event will host 25 men’s teams and 25 women’s teams. The organizing committee has already received more than fifteen entries.